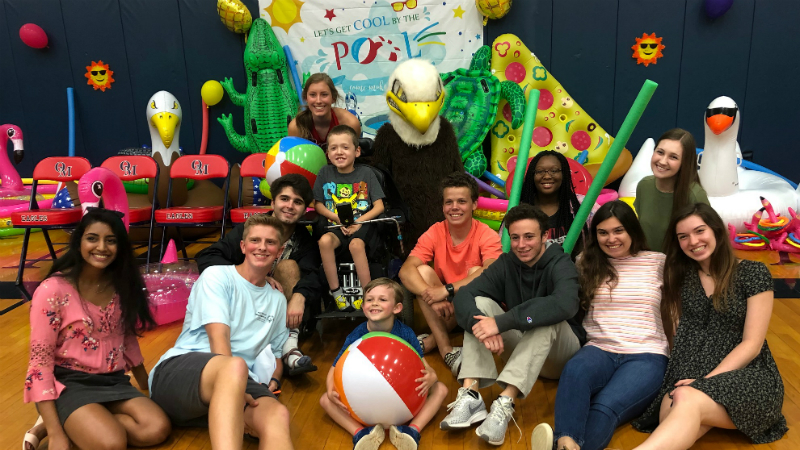 The Oak Mountain High School National Honor Society Leadership Team led the effort to raise money for 8-year-old Noah, who was diagnosed with a progressive muscle disease and wished for a pool with a lift so he could do more water therapy. (CONTRIBUTED)

NORTH SHELBY – Noah, a Birmingham area 8-year-old boy with a progressive muscle disease, is enjoying his new pool thanks to the efforts of students at Oak Mountain High School.

The students raised $12,000 during the 2018-19 school year, which was the most of any Alabama school, which earned the National Honor Society leadership team a pizza party and special Make-A-Wish pins for graduation.

A total of 16 schools in the state raised $56,862 during the previous school year.

Emily Paz initially proposed the idea of working with Make-A-Wish to the other members of the OMHS National Honor Society Leadership Team the previous school year.

“We had previously raised money for Toys for Tots, but we had a lot of competition with our middle school,” Paz said. “We came to the conclusion that high schoolers don’t really like to give their own money to a cause that is difficult to see, so we began brainstorming new ideas. I presented the idea to work with Make-A-Wish, so that our student body/faculty/community could actually connect their fundraising efforts to a specific child.”

The school raised the minimum of $8,000 needed to grant 15-year-old Bella’s wish to visit Hawaii.

Then, this past school year with Paz as president, the National Honor Society decided to continue granting wishes.

Fundraisers included a basketball tournament called “Make a Swish” during the school’s homecoming week activities. Students paid $20 per team of four to participate.

The group also sold tickets to a casual rave/dance in January called “Frostfest,” which was popular because it was led by student DJs.

Another component of the fundraising was a collection jar competition, in which jars were placed in teach teacher’s classroom, and the teachers in a certain hallway or department who collected the most money after six weeks earned “duty-free rights,” meaning they would not be required to work the carpool line, chaperone events, etc.

“This was a big incentive for the teachers to push the kids to bring in money,” Paz said. “The collection jars ended up raising the most amount of money out of all of our fundraising efforts.”

An important part of the efforts was Oak Mountain High School Principal Kristi Sayers encouraging all clubs and organizations to contribute. Other groups that pitched in included the dance team, Student Government Association, other honor societies and the OMHS show choir/talent show.

“At the end of the year, we invite our Wish Kid to the school and throw him or her a big pep rally with the entire school, with the theme of their wish,” Paz said. “The first year it was tropical/Hawaiian themed for Bella, and this year it was pool party themed for our Wish Kid Noah. Noah was diagnosed with a progressive muscle disease, and his wish was to have a pool with a lift—he is in a wheelchair—so that he could do more water therapy.

“There are no words to describe how proud I am of OMHS and the NHS Leadership Team. Leading this philanthropy project has been such an honor and amazing experience. Not only have we learned how to work and lead towards a big goal, we’ve also been able to grant a child’s number one wish in their life. OMHS is excited to continue this tradition in the future!”

Any schools or students who want to get involved in the Kids for Wish Kids Program should contact Zabala at czabala@alabama.wish.org.

“All the money raised in Alabama stays in Alabama to go to kids here,” Zabala said.