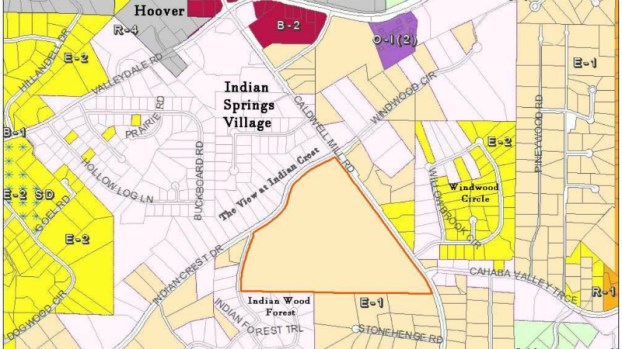 A 63-acre parcel of property in North Shelby County was returned to its previous E-1 zoning by the Shelby County Planning Commission. (CONTRIBUTED)

NORTH SHELBY – A 63-acre parcel of property that was targeted for development has been returned to its original zoning after residents in the area balked at plans for the subdivision.

The Shelby County Planning Commission in February approved a rezoning request for the proposed Rushing Farms that would have allowed for smaller lot sizes, but the Planning Review Board voted in March for the Commission to reconsider its initial decision.

The Commission reheard the case on Monday, July 15, and decided to rezone the property back to E-1, Single Family Estate, which requires lot sizes of at least 1 acre.

The property is located near the intersection of Caldwell Mill Road and Indian Crest Drive in North Shelby County.

The Planning Commission initially approved rezoning the property to E-2 Special District, and the site plan called for 63 lots on 63 acres, with an average lot size less than 1 acre because of the inclusion of green spaces, buffers along two edges of the development and two detention ponds to control stormwater runoff.

But residents argued there is no justification for granting Special District designation to the property, the planned lots would not be compatible with neighboring lots, the Planning Commission meeting was not held in an orderly fashion, the Commission did not address residents’ concerns and the Commission made its decision based on inaccurate information.

“This rezoning benefits only one landowner,” said Mary Bahri, one of the three residents who requested a hearing by the Review Board.

“There are no E-2 lots surrounding the property,” added Mary Frances Cull, another of the residents who requested the hearing. “They are all 1 acre and larger.”

Residents also think the development would add to already existing problems with traffic and stormwater runoff in the area, they said.

Brooks Harris, representing developer Harris Doyle Homes, pointed to the effort in planning a development that would be compatible with neighboring properties and addressing stormwater runoff with detention ponds that would yield less runoff after development than is currently experienced at the site.

The staff report provided to the Commission before the rehearing recommended reinstating the previous E-1 zoning because the property owner and developer had withdrawn plans for the project.

“I had to make a tough call, but ultimately decided it was not the best project for us to pursue right now because of several other larger projects that have presented themselves,” Harris wrote in an email to a county employee.