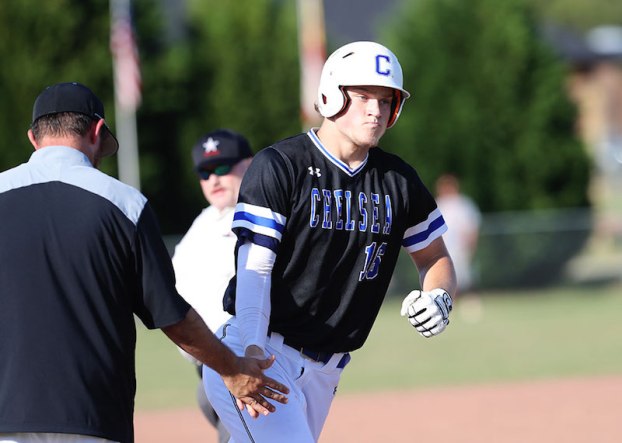 Chelsea standout baseball player and this year’s offensive Player of the Year in Shelby County Carter Frederick competed in the North-South All-Star baseball game on Tuesday, July 16. (For the Reporter/Cari Dean)

Being the best hitter for the Chelsea Hornets, who made it to the Class 6A State Championship this season, Frederick batted .407 at the plate with 46 hits and 38 RBIs to earn a share of the Player of the Year award with Oak Mountain’s Jackson Kimbrell, while also making the All-State team.

He finished the season as the leader in hits and RBIs, while finishing second in doubles with 15, but it was his postseason presence that made 2019 a special season.

Heading into the playoffs, the Hornets had a difficult path ahead, but Frederick’s presence was key, which was the tipping point in leading him to the offensive Player of the Year award.

In the Hornets’ 10 postseason games leading up to the championship series, Frederick posted at least one hit in nine of the 10 games and had two hits in four of the nine games. In that same stretch, he posted a combined 15 RBIs, 10 of which came against the No. 1 team in the state.

With that consistent effort at the most opportune time of the year, Frederick played a major part in Chelsea upsetting No. 6 Faith Academy, No. 1 Russell County and No. 2 Hillcrest-Tuscaloosa to earn a spot in their first state championship series in school history.

It closed out a special junior season and set him up to be one of the best players in the state heading into his senior year.

During the All-Star game, we got a glimpse of what we can expect again after Frederick not only played offensively, but pitched two innings as well.

While the North All-Star team lost both games, 18-16 and 16-7, Frederick got solid playing time in the second game, and while he went 0-for-1 at the plate, he was able to pick up an RBI thanks to a bases-loaded walk.

On the mound, he went two innings, and while he allowed two runs on two walks and one hit, he also struck out three of the 10 batters he faced.

During the two games, there was an all-star game record for total runs scored at 57 and total hits at 41. The North now leads the all-time series 23-14-1.

It was a fun environment for the players and gave Frederick a chance to suit up with Alabama’s best high school baseball players heading into his senior season.

Briarwood, Montevallo, Helena compete in 7-on-7

By ALEC ETHEREDGE | Sports Editor HELENA – At the midway point of July, the 2019 football season is now... read more