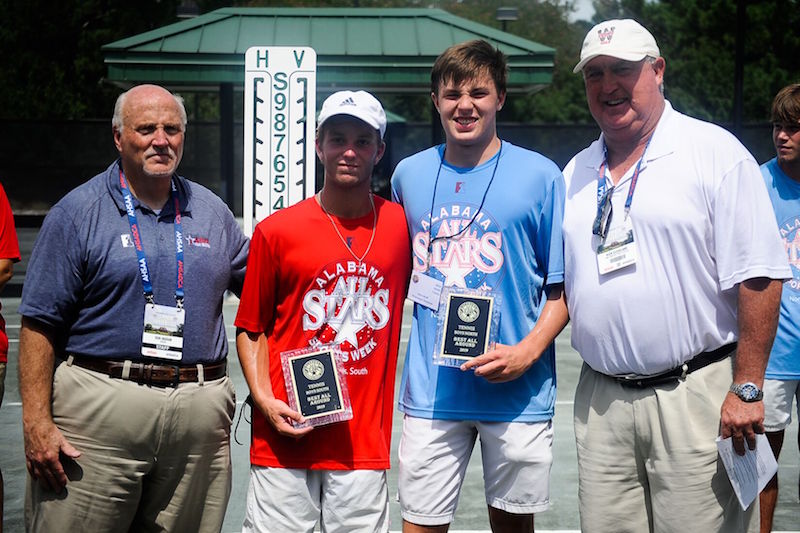 Briarwood's John Wolf, second from right, won his singles match and was named the all-around best player for the North team in the inaugural North-South All-Star tennis match. (Contributed)

MONTGOMERY – In the inaugural AHSAA North-South All-Star tennis matches, some of the state’s best tennis players took to the courts at Montgomery Country Club on Thursday, July 18, but it was three local players that stood out from the pack.

Briarwood’s John Wolf and Spain Park’s Ryan Stafford and Sydney Ellison all won matches on the day, while Wolf and Ellison were named the best all-around players for their teams.

Each player won a singles match during the event while Ellison won a doubles match as well to help lead both North teams to victories.

For the boys, Wolf won his singles match over Daphne’s Matthew Brooks despite losing the opening set 6-2. He bounced back to win the next two sets by finals of 6-3, 6-3, to come from behind and take the match two sets to one.

Stafford made much easier work of his opponent by taking down Montgomery Academy’s William Robertson in straight sets 6-0, 6-1.

Both of those wins played a key role in North’s 8-1 victory over the south team. Thanks to his comeback effort, Wolf received the best all-around award for the North team thanks to his relentless attitude.

Wolf also played a key role in helping the Lions win the 2019 Class 6A State Championship this past spring thanks to three consecutive wins with just one set dropped. That Briarwood team won every single singles and doubles match for a perfect 84 points.

The most dominant performance of the day, however, went to Ellison, who not only swept her singles match in straight sets 6-0, 6-4, but also won her doubles match with ease. 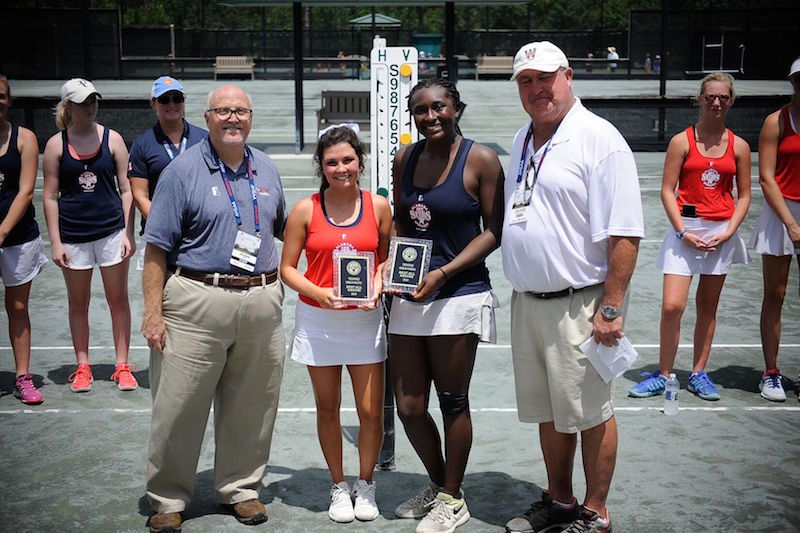 Sydney Ellison, second from right, won a singles and doubles match to earn the all-around best player award for the North team. (Contributed)

Normally a rival, she teamed up with Hoover’s Kennedy Ward to take down the team of Whitsett Herring and Rose Nicholas, both of McGill-Toolen, by a final score of 6-0, 6-2.

Ellison was the only player in both the boys and girls competitions to win both a singles and doubles match during the event, which was more than enough to earn her the award of best all-around player for the North team in an 8-1 victory.

In the state of Alabama, Ellison is known as the sixth best recruit according to Babolat.com, while being the 183rd best in the Southeast and the 704th best player in the country.

Each of those three players will be strong contenders for state championships next springs, but for now, they get to revel in a special moment that they’ll remember for the rest of their lives after competing in their first high school All-Star event.