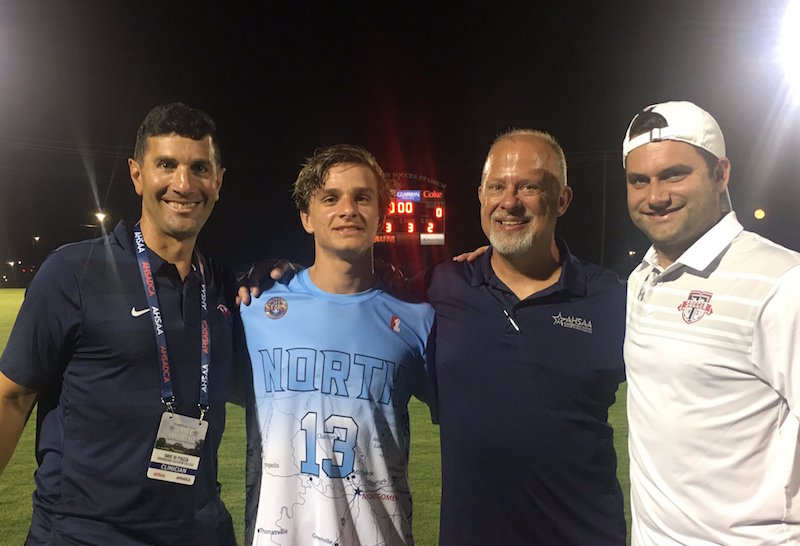 MONTGOMERY – With five teams from Shelby County making it to the Final Four during the 2019 soccer season, including three appearing in state championship matchups and two winning those matchups, it was another special year on the pitch, and on Wednesday, July 17, several of the county’s best players got one last chance to suit up and compete at the 2019 North-South All-Star games.

For the boys, rising-seniors Bailey Morman of Briarwood and Ryan Webb of Oak Mountain were part of a 3-0 shutout victory for the North team. And for the girls, Chelsea’s Kailey Littleford and Spain Park’s Molly McNulty both represented the North team in a tough 3-1 loss.

For Webb and the boys’ team, it marked a rare night not only thanks to the 3-0 victory, but what the special occasion was able to bring together.

After being one of the best defenders in the state during his junior season, Webb earned the right to play in the All-Star game. He cleared 15 balls from crossing the goal line this season, which is an incredible feat and earned him a spot on the All-County First Team as a defender.

While there were many special games throughout his junior season, one of the most memorable was in this All-Star matchup due to the head coach he was playing for—his dad.

Mountain Brook head coach Joe Webb led the North team as the head coach and got to watch his son put on a defensive clinic as usual.

With his help, as well as others on the team such as Morman, the North team used a dominant defensive effort on the way to picking up the shutout. And while they compete against one another during the regular season, the father-son combo in the All-Star game marked the first high school match they had competed for on the same team, and a memory that will last a lifetime.

Morman, who moved all over the field during his junior season at Briarwood, posted 10 goals and seven assists this past season, while also showing strong defensive skills, which again were proven in the All-Star victory.

With the win, the North All-Star team moved to 12-4-1 all-time in the series.

While the girls lost their game, it marked a special opportunity for both Littleford and McNulty to compete with and against some of the state’s best players.

During this past season, Littleford was one of the biggest scoring threats in the state and ended up leading the county in goals with 38, while also adding 18 assists.

Heading into her senior season for the Hornets, she will be one of the leaders of a team that will be looking to redeem a difficult Final Four loss this past season.

McNulty will also look to take the Jags to the next level during the 2020 season as a leader of the team from the midfield after an impressive season ended too short in 2019.