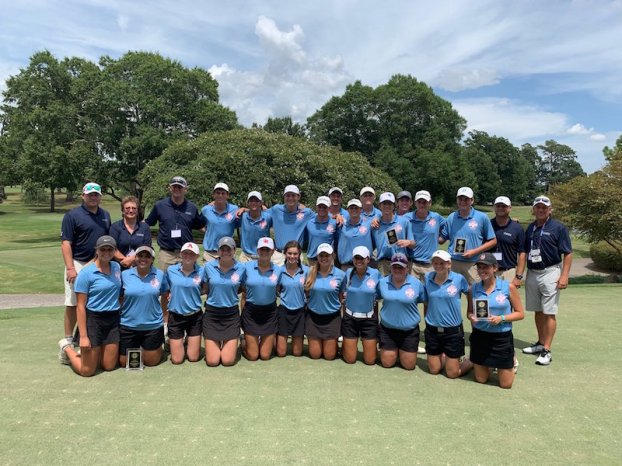 MONTGOMERY – The North swept the South in the inaugural North-South All-Star golf tournament hosted by the AHSAA at Montgomery Country Club on Thursday, July 18, and two Spain Park golfers as well as one Oak Mountain and one Thompson golfer played key roles in the North’s victories.

Marilyn Steed and Hayden Carner of Spain Park, Katie Gray of Oak Mountain and Landon Wockenfuss of Thompson were the four local competitors honored to play in the All-Star event.

The event featured a team format with different players teaming up to play team match play with a winner based on a point system.

The North girls posted a three-point win over the South scoring 58.5 points to the South’s 55.5. The North boys had a little more cushion winning 63.5 to 50.5. Each divided into six two-player teams and played match play with each hole worth one point. The team that won the entire round received an additional point. If both teams tied on a hole, the point was divided in half for each two-man team.

For the boys, Carner and Wockenfuss teamed up together as players from the Birmingham-metro area and went on to have a dominant performance.

Both are considered two of the top players in the state heading into the 2019-20 school year.

Steed and Gray both lost their matches from a point standpoint on the girls’ side, but each also played a key role in helping the North girls’ team sneak out a victory.

Despite a 12.5-6.5 loss for Steed, who was teamed up with Vestavia Hills’ Katherin Davis, the six holes one and one hole halved were important in a battle that came down to three points.

The same can be said for Gray and her teammate Hanna Dyar of White Plains. The two lost their match 12-7, but won some important holes throughout to help lead the North team to a victory.

Had the two teams lost one more hole and halved another, that could have made the difference in a lost, but they came through in important situations, showcasing why they are some of the best golfers from the area.

By ALEC ETHEREDGE | Sports Editor ALABASTER – The Thompson Warriors burst back onto the scene during the 2018-19 basketball... read more