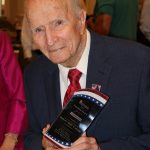 Cahoon, a 97-year-old World War 2 veteran, was born in Chunky, Miss., on Oct. 12, 1921, to a railroad man and a homemaker. He was one of three children and grew up during the Depression, when his parents became sharecroppers and young Bob hired out to pick, hoe and chop cotton.

Cahoon graduated at the top of his high school class and then enrolled at Holmes Community College. He recalls working on a Sunday afternoon at the local soda fountain in Pickens, Miss., when he heard about the attack on Pearl Harbor.

He thought he would be called to service, and he was—on his 21st birthday. “It felt like something I needed to do,” Cahoon said.

Cahoon was sent to Kessler Field in Biloxi, Miss., as a member of the Army Air Corps, and it was determined that he could best serve in a clerical position. After several months of training, he was shipped out to Australia.

As a private first class, Cahoon was sent to New Guinea to serve in the 55th Troop Carrier Squadron, 375th Group of the Fifth Air Force. Cahoon was charged with recording all the flight hours for the pilots, flight engineers and C47 transport planes. These carefully recorded hours provided valuable insight for aircraft mechanics to maintain the aircraft as well as providing service logs for crew who reached their flight time limits and had to rotate off.

After his service in New Guinea, Cahoon was relocated to Beek Island in the Netherlands, where his diet of mainly peanut butter caught up to him and he became anemic, so he was transferred to Leyte Island in the Philippines to recuperate.

Leyte Island is the famous landing site of the U.S. forces led by General Douglas MacArthur.

The Filipino people were most welcoming, said Cahoon, who at the end of the war was dispatched to Okinawa for transfer home and discharge.

“Our only source of entertainment at Clark Field was watching a movie,” Cahoon said. “They stopped the movie to tell us that an atomic bomb had been dropped. We had no idea what an atomic bomb was. We quickly turned on the radio to find out what was happening.”

Cahoon was sent home on the Admiral R.E. Koontz to Tacoma, Wash., where the troops were so glad to be back on U.S. soil that they knelt down and kissed the ground.

Cahoon completed his accounting degree at Mississippi State University and took a job with TCI in Birmingham, where he met his wife, Elizabeth Ann Trammell.

Cahoon enlisted with the reserves in 1950 and was recalled in 1951 for the Korean Conflict, serving at Barksdale Air Force Base in the Strategic Air Command as a staff sergeant.

Upon returning to Birmingham, Cahoon continued to be an active member of the community, serving through his church and the Bluff Park Elementary parent-teacher organization, which founded the Bluff Park Art Association Annual Art Show as a school fundraiser.

“Bob has continued to serve his community and all those around him and is one of Hoover’s finest residents,” Hoover Veterans Committee member Mark Davis said during his presentation of the award to Cahoon.

By GRAHAM BROOKS / Staff Writer HELENA – A 59-year-old Helena man has been arrested and charged with first-degree assault... read more