HELENA – A 59-year-old Helena man has been arrested and charged with first-degree assault after allegedly shooting a victim in the 1800 block of River Road near Helena, according to the Shelby County Sheriff’s Office. 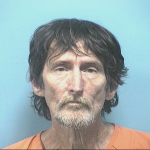 The assault happened on Thursday, July 18, at 10:20 p.m. when Shelby County Sheriff’s deputies responded to investigate a shooting call in the 1800 block of River Road. When deputies arrived, they located a victim who was suffering from a gunshot wound as well as blunt force trauma. The victim was airlifted to a local hospital.

Through the investigation, deputies learned that there was a verbal argument between the victim and the suspect who knew each other, which escalated to the suspect shooting the victim.

As a result of the investigation, deputies arrested Samuel Fred Guy of Helena who is currently being held in the Shelby County Jail on a charge of first-degree assault. His bond has been set at $10,000.

First-degree assault is a Class B felony. If convicted of the crime, guy could face up to 20 years in prison.

Anyone with additional information about this crime should contact the Shelby County Sheriff’s Office directly at 669-4181, the secret witness line at 669-9116, or through the website at Shelbyso.com.