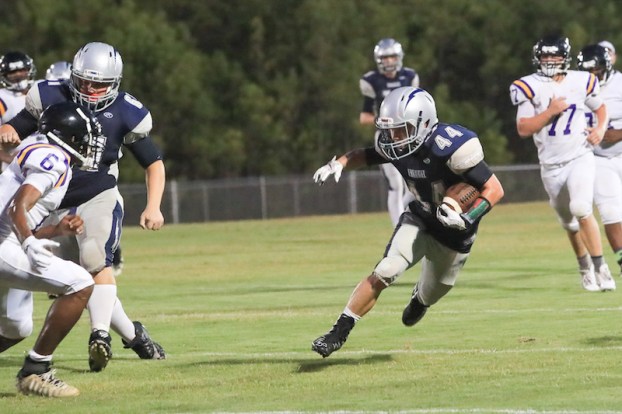 The Evangel Lightning will be favored to win their third consecutive state championship under head coach Tim Smith this season thanks to the return of several star players on both sides of the ball. (File)

The Evangel Christian dynasty isn’t slowing down under third-year head coach Tim Smith, in fact, it looks to be getting better after the Lightning won their second ACSC State Championship in a row under Smith during the 2018 football season.

Now, heading into the 2019 season, they may be even more loaded than they have been the last two years with several returning starters ready to leave their mark on a third consecutive title.

Last year, the Lightning finished the season 8-3 with all three losses coming to AISA teams in 11-man competition, while they are in an eight-man league. All three losses were to teams that were ranked in the AISA at some point last year, including Kingwood, Lowndes Academy and Bessemer Academy.

They also beat several 11-man teams and went on to win the eight-man championship by a final score of 58-34 over rival Ezekiel Academy.

Again this season, Evangel looks to be a shoe-in to win the ACSC title yet again, and while the games are played for a reason, the opponents they face in the AISA and a historic opening game at the University of Montevallo will be the exciting ones to watch this season.

One of the biggest reasons to feel so confident in the Lightning’s ability this season is thanks to the return of quarterback Tyler Henderson for his fourth year as a starter.

After starting at Kingwood as a freshman, Henderson transferred to Evangel and has got even better the last two years. He now heads into his senior season with a frame of 6-foot-6, 205 pounds and brings back 1,922 passing yards and 23 touchdowns to one interceptions from last season.

He’ll be joined in the backfield by the return of senior running back Noah Shears. While Shears is coming off a season where he spent most of the year injured, he still ended up with 600 yards, including 100-plus in the ACSC championship game and 200-plus in the national title game. He’ll also be joined by the return of junior Daniel Viles, who brings a big frame as a power back.

Also returning will be one of the most exciting athletes on the team in Will Ferrell, who will play in the slot. He totaled 331 rushing yards and 253 receiving yards in just five games last year. He’ll be joined at receiver by Yura Gothard, Carson Henden and Noah Murdaugh.

Not only are those skill players at each position talented, but they’ll have a lot of size and experience up front to block for them. Will Parker, Jacob Jeffers, Jarred Warren, Tanner Parks and Zach Rickles are all solid starters, while Murdaugh, Logan West and Caleb Lumpkin will add depth. Being close to two deep at the position is what makes the Lightning such a good team.

The defensive front will feature a lot of the same playmakers, while Viles will also play at the nose guard position.

The one place where the Lightning will truly miss someone is at linebacker with the departure of All-County player Hunter Green, who totaled 140 tackles last season.

Attempting to replace that void will be Hunter Barnes and Shears. Cannan Mann, Murdaugh, Riley Mason, Cooper Vowell and Timothy Howell will also play at the position, and all are physical athletes that can make plays.

In the secondary, receivers Ferrell and Gothard will look to be leaders at cornerback, while Harris Black and Henden will be the starting safeties. Eli Whitfield, Jeffers and Andrew Stafford will help with depth.

Prediction (9-1): There’s no real danger in predicting Evangel’s only loss to be to AISA powerhouse Bessemer Academy because the rest of the schedule is manageable. The Lightning should be able to compete in every game this season at every level of competition due to their depth. They can’t get lost in success and slip up against Ezekiel, but it’s a team that has so much offensive talent that it’s tough not to see them making plays offensively to win games.

By ALEC ETHEREDGE | Sports Editor It’s time for a new season for the Cornerstone Chargers and it marks the... read more