Alabaster’s Bobby Joe Seales was elected and sworn in July 10 as Vice-President General for the Southern District of the National Society of the Sons of the American Revolution at their 129th Annual Congress is Costa Mesa, California. 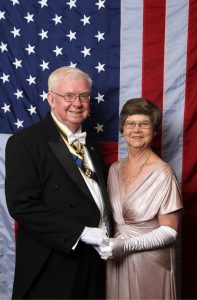 Bobby Joe and Diane Seales in Costa Mesa, California at the National Society of the Sons of the American Revolution’s 129th Annual Congress. (Contributed)

He joined the Birmingham Chapter of the Alabama SAR Society in February 1999. In August 2003, after his leadership role in forming the Cahaba-Coosa Chapter in Shelby County, he became the first president of that chapter. In 2014-2015 he served as president of the Alabama SAR Society. His Revolutionary War patriot ancestors are David Lindsay, Charles Seale and John Horton.

In addition, on July 9, Seales received the Gold Roger Sherman Medal and Certificate from the National Society of the Sons of the American Revolution in recognition of outstanding service as chairman of the fundraising committee of the George Washington Endowment Fund.

Seales, a noted historian for Alabama, Shelby County and its communities, along with his wife have published in 2017 and 2018 two books in recognition of the Alabama Bicentennial – “Alabaster and Siluria: The Early Years, A Pictorial History” and “Pelham Memories: A Pictorial History.”