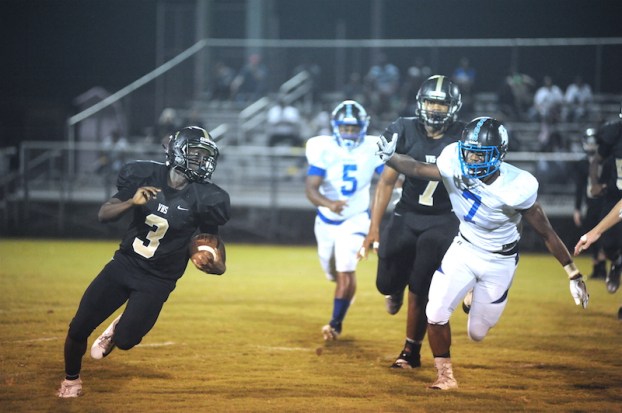 The Vincent Yellow Jacket should be much better up front on both sides of the ball during the 2019 football season, as they look to improve on last year’s 3-8 overall record. (File)

Vincent will be coming off a playoff berth for the first time since 2014 when the Yellow Jackets kick off the 2019 season, but second-year head coach Lucas Weatherford and his team know they have to be better in 2019.

While they made the playoffs a year ago, the Yellow Jackets won just three games and lost their first-round playoff matchup 56-0. They also gave up 40-plus points in seven of their eight losses last year giving up an average of 37.2 points per game and scoring just 18.6 points per game.

Heading into the new season, Weatherford says this year’s group is growing and is starting to buy in. While they may not be all the way there yet, the Jackets should continue to move in the right direction, which includes having the attitude of a winning football team, while putting in the work to become better on and off the field.

The schedule does have several difficult games, including the always tough LaFayette and the improving Thorsby, but there are a handful of games the Jackets will be able to compete in, which means two consecutive playoff berths aren’t far-fetched.

Vincent will also have a lot of talent to replace on this year’s roster with the loss of All-County players Chris Hardie and Robbie Albright both on offense and defense.

That being said, the athleticism will be there for the Yellow Jackets, it’s just a matter of them putting in the work to develop.

At quarterback, Will Harris is set to start for the first time with the departure of Dusty Davis. Harris is an athletic playmaker that will allow the Yellow Jackets to do a lot offensively.

While the backfield will lose Hardie and Albright, junior Tae McGregor and senior Kaleb Wilson will return.

McGregor may be the fastest player in the county having won the 100-meter and 200-meter dash state championships last year, while Wilson is also a speedy back that can make cuts. Ryan Culliver adds a power back with a size of 220 pounds to change up the pace.

One of the biggest concerns for the offense will be the receiver position with several players needing to step up and prove themselves.

Treston Smith will be the go-to guy heading into fall camp, but Cobe McKenzie and Caleb Scott will have to step up and be added options for Harris.

Luckily, Harris should have more time to find an open guy than past quarterbacks thanks to a solid offensive line returning.

Returning starters Martaviun Lawson, J.T. Youngblood, Paul Albright and Blake Roberson all have good frames and make the offensive line one of the strongest position units on the team.

With most of those guys playing on both sides of the ball, the defensive line is also full of returnees and is another strong position. That unit will also be helped by the return of Torian Datcher, who is a playmaker at 5-foot-11, 315 pounds.

Behind that front four, the linebacker unit should be vastly improved as well thanks to the return of starter Ryan Culliver. He’ll be joined by sophomore Griffin Martin and freshman Zach Wright. McKenzie and Scott will also spend time at the position.

Like the rest of the defense, the secondary will see offensive athletes playing on the defensive side of the ball as well. Wilson, McGregor, Davis and Smith should all be key guys on the back end, which makes health extremely important for those guys.

Prediction (4-6): Health, health, health. That’s the biggest problem standing in the way of Vincent taking a step forward. While they’ll have some newcomers at key positions on offense, specifically quarterback and running back, they’ll also have a plethora of athleticism at every position. With a solid offensive and defensive front, as well as defense that should be vastly improved, if the offense can play just a few points per game better than last year, the Jackets are in for not just another playoff berth, but a program-changing type of season from a belief standpoint.

A look at Vincent’s 2019 football schedule

By ALEC ETHEREDGE | Sports Editor The Vincent Yellow Jackets made the playoffs last year for the first time since... read more