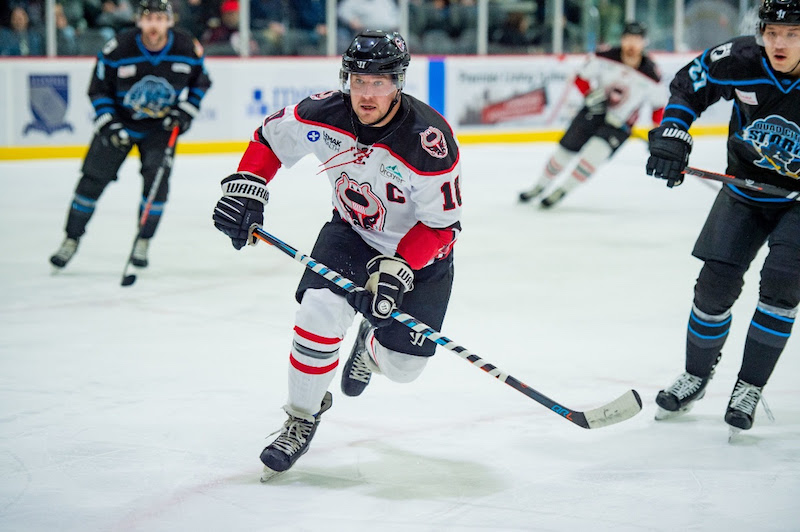 Former Birmingham Bulls’ team captain Craig Simchuk has retired as a player and will join the team’s coaching staff for the upcoming 2018-19 season. (Contributed/Maxwell Barton)

PELHAM – The Birmingham Bulls’ front office announced on Thursday, July 25, that former Birmingham Bulls’ team captain, Craig Simchuk will be retiring as a player and joining the coaching staff as an assistant for the upcoming 2019-20 season.

Simchuk led the Birmingham Bulls as team captain for the team’s first two seasons in the Southern Professional Hockey League after playing three years with the Columbus Cottonmouths under their head coach, and Bulls legend, Jerome Bechard.

The Winnipeg native closed his professional career under veteran status with 46 goals and 75 assists in 238 games played.

Simchuk led the Birmingham Bulls through a record-breaking season in 2018-19 with the longest winning streak from the start of the season in SPHL history with 11 straight wins, while also helping the team tie the SPHL record for most regular season wins with 39 victories and reaching the SPHL President’s Cup Finals for the first time in franchise history.

“I am very excited to rejoin the Bulls’ organization in this new role,” Simchuk said. “I feel incredibly lucky to have the opportunity to transition into a career that allows me to continue working in the sport I love.”

He also had a message for the fans, who helped support him and the program in their first two years.

“Thank you to all of the fans for your love and support,” he said. “I am looking forward to season three as a coach on the team.”

While head coach Jamey Hicks will miss the ability of Simchuk as a player leading the team on the ice, he knows leading from the coaching staff will be just as beneficial.

“I couldn’t be more excited to add Craig to our coaching staff,” Hicks said. “As a player, he was a fierce competitor that led by example. We are looking forward to seeing the same passion as he starts his coaching career.”