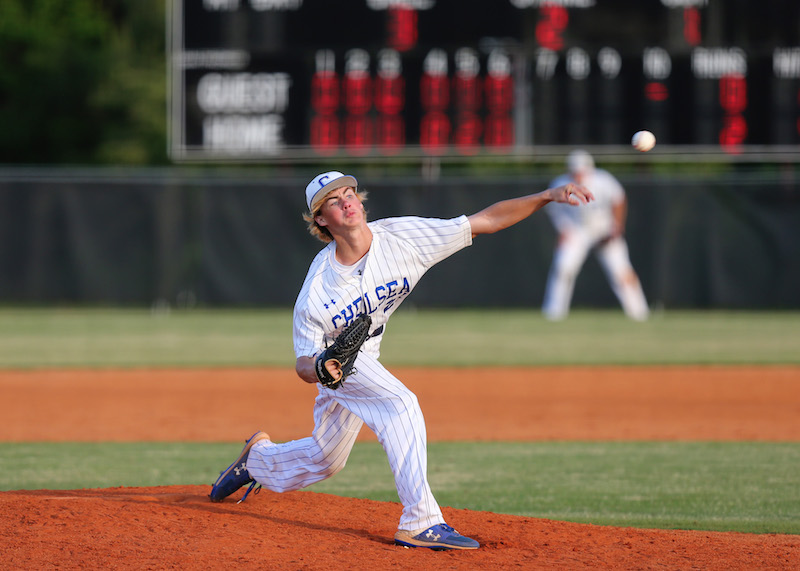 Chelsea pitcher Connor Ball has been named a MaxPreps Sophomore All-American pitcher following a stellar season for the Hornets. (For the Reporter/Cari Dean)

CHELSEA – After a spectacular season for the Chelsea Hornets, the awards continue to roll in for rising-junior pitcher Connor Ball, who was named a 2019 MaxPreps Sophomore All-American on Tuesday, July 16.

Being named to the spot made Ball one of the 10 best sophomore pitchers in the country during the 2019 baseball season, while it also made him one of the top 31 players in the class of 2021.

During his sophomore season, Ball posted an overall record of 9-3 with an ERA of 2.12. He also totaled 107 strikeouts, which led all of Shelby County and was one of the highest marks in the state. Ball pitched 75 2/3 innings this year allowing just 65 hits and 26 total runs.

His impressive effort was a major factor in Chelsea having its best season in school history after the Hornets made their first appearance in a state championship series.

In the playoffs, Ball played a huge role in the team’s success as the number one pitcher in each series.

While the team lost in three of his five postseason starts, each loss was by one run. In the first round, the Hornets won 4-0 with Ball pitching six innings and striking out eight.

In the next two series, against two of the top three teams in the state, Chelsea lost the opening game of each series with Ball on the mound by finals of 2-1 against Faith Academy and 8-7 against Russell County.

The Hornets bounced back to win each series, and then Ball went on to lead his team to a 2-0 shutout against Hillcrest-Tuscaloosa in the semifinals, which led to a quick sweep of the Patriots and punched Chelsea’s ticket to the championship series.

In the title series, Ball once again put together a brilliant outing against powerhouse Cullman taking a no-hitter into the seventh inning of the opening game.

The Bearcats, however, went on to win with a walk-off in the bottom of the seventh to take the game 1-0 before going on to win the championship.

Despite the 2-3 record in the postseason, Ball was extremely close to going 5-0 with three matchups against top-six ranked teams as a sophomore.

With two years left at Chelsea, Ball will have the opportunity to become one of the best pitchers in the state, and possibly the country, if he continues to put in the work.