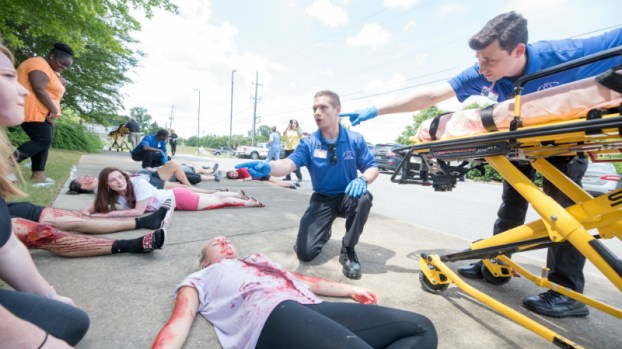 HOOVER – It looked like a scene from Carrie White’s prom night or an episode of a zombie apocalypse. Students sat on the ground with blood covering their bodies, their eyes hollow and with ghastly facial expressions.

Fortunately, it was not an actual emergency but a simulation.

The “victims” were actors and used make-up. The simulation took place inside and outside Jefferson State Community College’s Health Sciences Building on Valleydale Road on Monday, July 22.

“We brought three departments together for this exercise,” said David Trott, director of clinical education for Jefferson State’s Shelby campus. “We had respiratory therapy, nursing and EMS and tried to make this look like a real emergency.”

“The scenario we created today was a family party in which a fight broke out and gunshots were fired,” Trott said. “By-standers are an issue in emergencies. Sometimes they get in the way, and sometimes they’re angry and belligerent. Our students need this experience.”

Trott said the simulation was only one of a number the students experience in their “cohort.”

“We’re starting our second cohort in the fall,” he said. “This is a two-year program in my area—respiratory therapy—and there is a dire need for professionals in the workforce. Our graduates are guaranteed work if they complete the program successfully.”

Trott said the exercise included transporting the injured inside the building and triage.

“Triage means emergency personnel determine if victims are red, yellow or green, just like traffic lights,” he said. “Red means they’re critical, yellow means not as critical and green means cuts or scratches. This is important determination for life-saving.”

David Bobo, the college’s director of community and media relations, said students were not only assigned roles outside, but four rooms were set up in the Health Sciences building for triage.

“This is a mass trauma event, and our graduates will learn from this exercise about quickly assessing and providing emergency treatment and life support,” he said.

Simulation supervisor Natasha Grimes, who works at the Shelby and Clanton campuses, said she was proud of the cooperation from several departments.

“This exercise mirrors what could happen at a local hospital,” she said. “Unfortunately our society can sometimes be violent and mass casualties have happened. Our students gained news skills today that will be beneficial in their careers”

By GRAHAM BROOKS / Staff Writer COLUMBIANA – The Shelby County School District has announced its policy for free and... read more