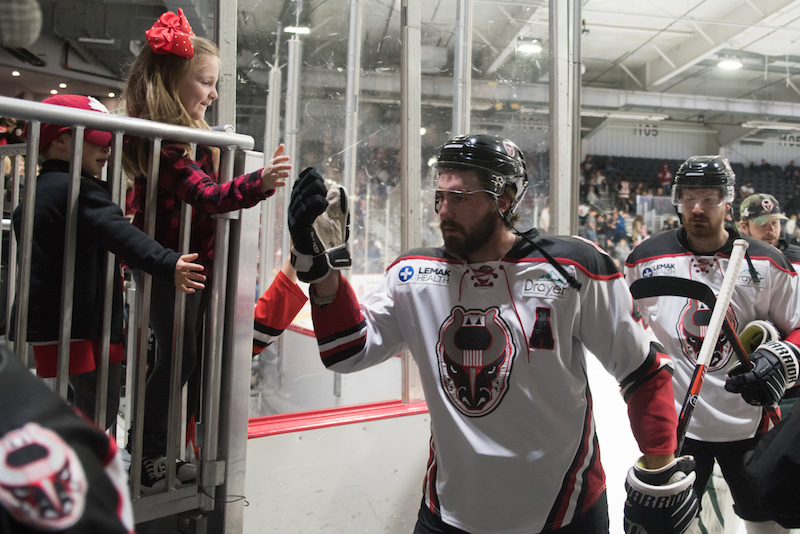 The Birmingham Bulls have released their 2019-20 schedule and will open the season at home on Friday, Oct. 18, in a rivalry rematch of this past season’s SPHL Championship series. (Reporter photo/Keith McCoy)

PELHAM – Coming off a special run to the SPHL Presidents Cup Finals in May, the Birmingham Bulls are already preparing for the 2019-20 hockey season, and on July 26, they released their schedule for the upcoming season with the theme “Unfinished business.”

In their first two years, the Bulls’ return to the professional hockey setting has featured plenty of promotional tactics to try and entice fans to attend games, but now the attention has shifted to supporting one of the best teams in the league.

While there will still be plenty of promotional fun throughout the 2019-20 hockey season, the Bulls will be coming off a year where they finished second in the league in both the regular season and the playoffs just one year after finishing second to last in the league and missing the playoffs.

With 28 home games and 28 away games, Birmingham is poised to host several big matchups this season, and fans in attendance will be cheering on a championship-level team led by SPHL Coach of the Year Jamey Hicks.

The excitement will start on night one of the season with a rematch of the Presidents Cup Finals when the Huntsville Havoc travel to Birmingham to take on the Bulls on Friday, Oct. 18, at 7:30 p.m.

The Bulls will be looking for an early-season win that could give them a quick momentum boost on a path to redeeming the championship loss to the Havoc this past season.

Birmingham’s other two games in October will both be on the road at Evansville and Macon on Oct. 19 and 26, respectively.

November, however, will feature a strong month of home games, including three straight home games to start the month with matchups against Quad City and Pensacola. They’ll also host an additional matchup with Pensacola and two with Fayetteville.

December will see the Bulls hit the road for four games, while they’ll also host four home games with Knoxville, Evansville, Pensacola, Quad City and Macon all on the schedule.

Birmingham will kick off the new year with three consecutive home games from Jan. 3-4, but the first two will be matchups against Peoria. That will be the first matchup between the first and second place teams from a year ago.

From Jan. 31 through Feb. 8, the Bulls will have one of their longest road trips with four consecutive road games, but then they’ll return home on Feb. 11 for a four-game home stand against Knoxville, Huntsville and Pensacola.

That will be followed by three road games, but then the Bulls return home to close out February with home games against Huntsville and Macon on the 28 and 29, respectively.

Birmingham will open March with three road games, but then get their longest home stand of the season with five consecutive home games from March 13-21.

Season tickets are on sale now. To buy tickets or for more information on the upcoming season visit Bullshockey.net.