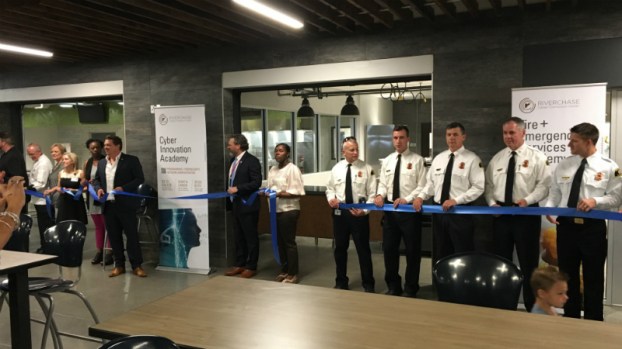 Ribbon cuttings were held for each of the five academies at the Riverchase Career Connection Center on Thursday, Aug. 1. (REPORTER PHOTO/STEPHEN DAWKINS)

The 92,000-square-foot facility is located at the former Riverchase/Pelham Middle School, off Willow Oak Drive, with five academies focused on college and career readiness.

RC3 will open to students on the first day of the new school year on Aug. 8, with an expected enrollment of 735, almost double the initial goal of 400.

“Today, what a terrific day, as we think about all the students who will walk through that door,” Murphy said.

Alabama Superintendent of Education Eric Mackey recognized the leaders who pulled together to make the center a reality, and said he was impressed to see the facility after hearing about it from Murphy.

“To see it is so much different than to hear about it,” Mackey said.

RC3 Director Ron Dodson noted that the investment in the center was a risk for the school system.

“I think it’s going to pay off big for our community and for our state,” Dodson said.

Though about 90 percent of graduates of Hoover high schools are accepted into college, a smaller number, about 60 percent of those who enroll, actually earn degrees.

RC3’s mission is to further college and career readiness.

“Today we open the door to even more opportunities to our students that will help them succeed in life,” Board of Education member Deanna Bamman said.

Mayor Frank Brocato said that a need for workforce development is a common concern voiced during conversations with business leaders.

“Here in Hoover, we’re not going to have any challenge; we’re going to become part of the solution,” Brocato said and added that the city will include in its budget funds to place a school resource officer at the center full-time.

After the speakers took their turns at the microphone, ribbon cuttings were held for each of RC3’s five academies: Fire Science, Health Science, Culinary and Hospitality, Cyber Innovation and Skilled Trades.

FROM STAFF REPORTS The University of Montevallo Concert Choir, under the direction of Dr. Melinda Doyle, has been chosen to... read more