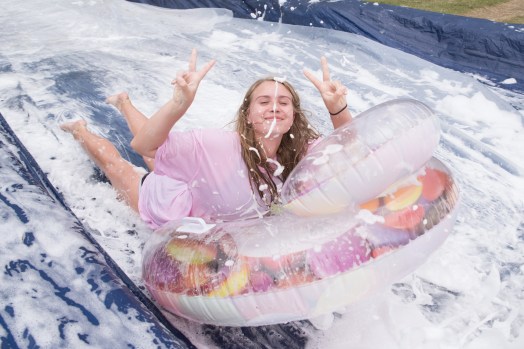 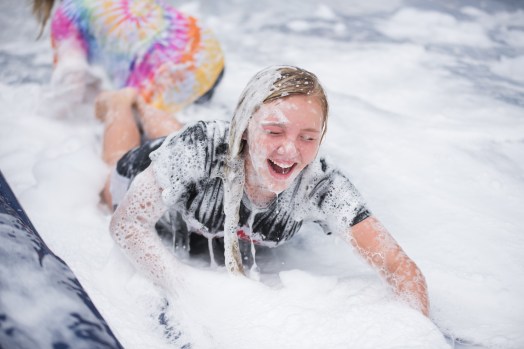 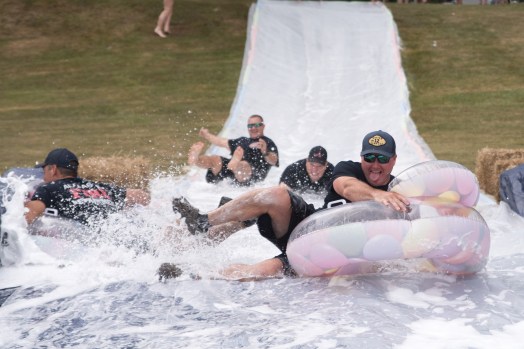 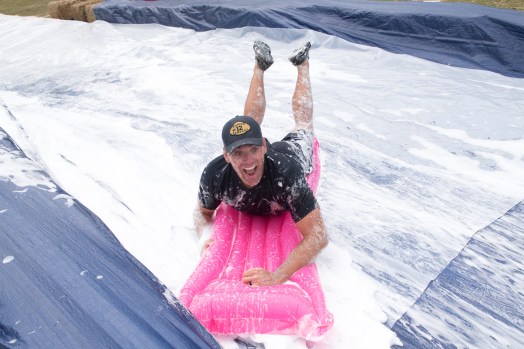 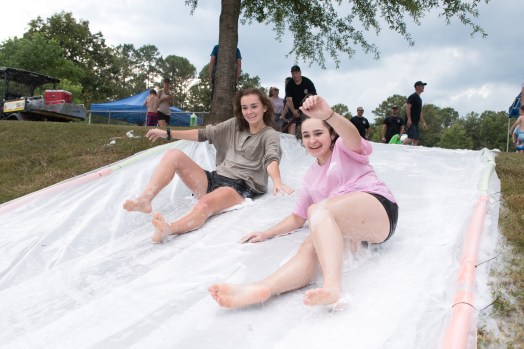 The Alabaster Teen Council’s annual slip ‘n slide event on July 30 was fun for all who attended. (Reporter photo/Keith McCoy)

ALABASTER – The Alabaster Teen Council’s fifth slip ‘n slide event on Tuesday, July 30, at Municipal Park was fun for all who attended.

Fire fighters with the Alabaster Fire Department took pleasure in testing out the giant slip ‘n slide before the event got started.

“Well, of course we have to try it out to see if it works,” AFD Fire Chief Tim Love said. “This is definitely one of the perks of the job.”

In addition to the slip ‘n slide, the event included an inflatable water slide, concessions and other water-related activities. Teen council public relations coordinator Noah Tanner said the event wouldn’t have been possible without the city’s help and resources.

A foam nozzle that’s normally used to clean up gasoline spills was repurposed for this event. Fire fighters mixed dishwashing liquid with water and used the foam nozzle to spray the mixture onto the slip ‘n slide.

“This event is a way to get people out and enjoying the weather,” Tanner said. “What better way to do that than with a slip ‘n slide? You can tell from the way the fire fighters were having so much fun, that everyone loves a good slip ‘n slide.”

Each year, Mayor Marty Handlon said the city tries to find the best place to build the water slide. The event has taken place at various parks throughout the city, but Handlon said this year’s location is the best yet.

“This is definitely the best location so far,” she said. “We don’t have any water-related entertainment in the city so this is an opportunity to play in the water and have some fun.”

The Teen Council is open to all students in grades 9-11 who attend Thompson High School, Evangel Christian School and area homeschools. The council works closely with Handlon to organize events for Alabaster’s youth and to provide insight and offer their perspective on various topics.

Over the past several years, the Teen Council has grown significantly in numbers. The group only consisted of 12 teens during its inaugural year in 2014. In April, 54 members were sworn in to serve on the council.

“The more teens we have on the council, the more people we can serve,” she said. “That also means more teenagers learning about local government and public service. We’re developing servant leadership in this generation and that really makes me proud and happy.”

Coming up next is the Teen Council’s Back to School Bash on Aug. 17 at Municipal Park. According to Tanner, the event will be focused heavily on arts and music. The talents of local teens will take center stage.

Those who would like to perform or show their work at the event are encouraged to contact the council through the Alabaster Teen Council Facebook page.