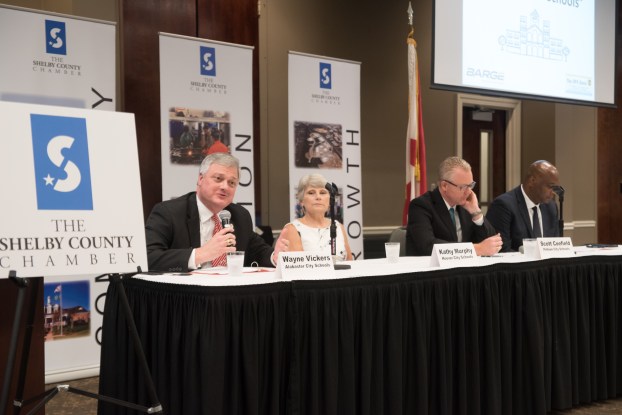 PELHAM – The superintendents at the helm of the school districts located within Shelby County came together on Wednesday, July 31, for The Shelby County Chamber’s annual State of Our Schools luncheon held at the Pelham Civic Complex.

Below are the responses from each superintendent. Responses are listed in alphabetical order by school district.

Vickers highlighted that the newly built Thompson High School recently opened, which paved the way for more schools to be moved around. Thompson Middle School and Thompson Sixth Grade Center combined and moved into the old THS building, and then Thompson Intermediate School moved into the TMS building.

Vickers said teachers are unpacked and ready for the school year to begin. He said the support of the community and the Alabaster Board of Education are the school system’s greatest strengths. He said one of school system’s achievements is a college and career readiness rate of 97 percent, which is comparable to its graduation rate of 97.4 percent. Vickers said ACS strives for excellence and believes in “whole-child education.”

“We have a place for every child,” he said. “Whatever a child’s interests may be, our goal is to help them connect and find purpose.”

Vickers said there are different ways for students to be successful. It doesn’t always have to be in academics.

“Sometimes the academic piece will not happen unless you meet those social and emotional needs of a student first,” he said. “When you have a student going through a crisis, social media and the others things they have to deal with are completely different from when we were growing up. It’s a very difficult problem but we’re making progress.”

Murphy highlighted the district’s Riverchase Career Connection Center, for which a ribbon cutting was held on Aug. 1. The facility was purchased from Pelham City Schools and was transformed into a career tech center where students can dive into culinary arts, skilled trades, cyber innovation, fire and emergency services and health sciences.

The center, open to students in grades 10-12, will also allow students to complete their math and English credits. Murphy said she and the school board realizes that not all children will go to college, so she’s proud to be offering additional opportunities.

Murphy said she’s committed to making sure teachers see the value of programs in place that introduce students to skilled trades. She said plans are in the works to introduce a college and career readiness program for kids in grades K-6. She said her long-term vision is for an early education center.

“College and career readiness starts even before kindergarten,” she said. ‘We have to make sure that students are entering kindergarten prepared.”

Murphy said studies show that students who entered kindergarten behind, not knowing their numbers or ABCs, stay behind throughout their school years.

“We have acknowledged it at the secondary level and I look forward to dipping even younger than kindergarten to ensure they’re entering kindergarten prepared.”

As the school district enters its sixth year, Coefield said one of the things he’s most pleased about is school culture.

“Our teachers and staff are nurturing, yet there is accountability,” he said. “We’re growing in numbers every year, making facility improvements and implementing new programs.”

PCS is entering its second school year with the Green and Gold initiative as a pilot program at Pelham High School. The program places heavy emphasis on teaching accountability, responsibility and work ethic.

He also highlighted another program starting this school year that will teach students about digital citizenship and Internet safety.

“Technology in the classroom is a great tool if used correctly, but it’s only a tool,” he said. “It could never replace a great teacher.”

PCS students have access to Chromebooks and they have been integrated into classrooms, but it does create struggles. He said it’s equally as important to train teachers and students to use it appropriately.

Brooks said the district’s greatest strength is its people – like its teachers, bus drivers, maintenance crews and cafeteria workers.

“It’s a collective effort to make our schools great,” he said.

He said the district is just as much concerned about the emotional and social wellbeing of students as it is about academics. Keeping in line with the wellbeing of students, SCS is implementing the All Pro Dad initiative that was founded by former NFL head coach Tony Dungy. It’s a national effort to engage more fathers in the lives of their children.

During the week of July 29, Brooks said 180 teachers participated in professional development. He said teachers are learning more about instructional technology in an effort to change the idea of what good instruction looks like.

He more steps are also being taken to introduce students to innovative career fields. As an educator, he said it’s important to pay attention to the job market so that kids will be prepared to take on the job available to them.

“We want to provide a myriad of opportunities,” he said. “We don’t want them to be pigeon held in one place.

By ALEC ETHEREDGE | Sports Editor MONTEVALLO ­– The University of Montevallo will play host to the first football game... read more