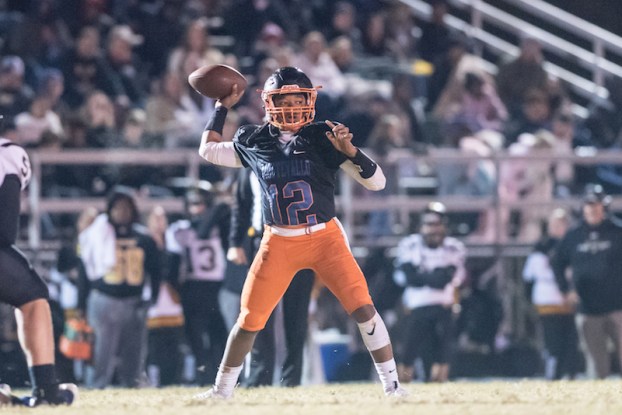 The Montevallo Bulldogs return the majority of their team after a 9-1 regular season in 2018, which has them expecting a special season in 2019. (File)

Anytime you have a senior-laden team with the majority of your roster back, you’re automatically going to gain high praise and attention heading into the football season, but even more so when you’re coming off a 9-2 season with two of the state’s best offensive playmakers back.

For the Montevallo Bulldogs, that’s the case, as they return the top quarterback and receiver in the state, while plenty of other weapons will surround them during the 2019 football season.

But with all of that success and talent last year, the Bulldogs still didn’t get where they wanted to after a first-round playoff exit via Andalusia, who went on to advance all the way to the semifinals.

After setting records offensively all season, including a team record of 435 total points, Montevallo was only able to muster up eight points against Andalusia in a 28-8 loss after not scoring less than 22 points in the regular season.

While they were dealing with injuries to several key players, that didn’t sit well, and now, it’s fuel.

This 2019 team might feature one of the most loaded Montevallo teams in school history, and while the talent is there, the burning desire to redeem last year’s disappointment and battle for a state championship this season is at the forefront less than three weeks from the season kicking off.

Last year, the Bulldogs had an All-State quarterback, an All-State receiver and a 1,000-plus yard running back, and guess what—they’re all back.

At quarterback, Malik Inabinette returns to lead the Bulldogs after throwing for 3,376 yards, which led the state, finishing with more passing yards than current Alabama quarterbacks Taulia Tagovailoa and Paul Tyson and current Auburn quarterback Bo Nix in the same season. He also posted 38 touchdowns and threw for 400-plus yards in three different games.

Last year, there was plenty of growing for Inabinette to do when it came to learning the position as a first-year starter, but his progression was lightning quick. Without injury late in the season, he could have piled on more yards and helped the team to a deeper playoff run.

Now, he goes into the year more confident with all of his offensive weapons back and ready to conquer the redemption path.

One of the reasons he was able to break onto the scene last year was with the help of four-star wide receiver and Auburn commit J.J. Evans, who had the second best receiving year in state history with 1,706 yards.

That mark was just 29 yards from being the state’s all-time leader in receiving yards in one season, while he also posted 18 touchdowns. He became one of the most sought after players in the state and the country with multiple SEC offers, and now he’s back to try and top his 2018 mark with a returning quarterback that isn’t afraid to throw him the ball in triple coverage.

Evans will face multiple double and triple teams this year, and while he is more than prepared for that, it will open up the field for several other playmakers, including fellow senior Jamarius Carter, who is primed for a breakout season.

Carter has a frame of 6-foot-5, 200 pounds, and has several coaches buzzing about him heading into the season. If too much attention is paid to Evans, Carter will take advantage of any one-on-one opportunities thanks to his height.

In addition to those two guys, Kial Cottingham is another trustworthy receiver, who will play in the slot as a sophomore, while Jemari Harris could have the best hands on the team according to the coaches, which gives Inabinette four trustworthy guys to look for.

The playmakers don’t stop there thanks to the return of Deon Gilliland to the running back position after totaling 1,088 rushing yards, 335 receiving yards and 17 touchdowns during his junior season.

A guy that can make one move and be gone, Gilliland takes advantage of the offense around him, knowing that a lot of attention will be focused on the passing game and even the legs of Inabinette.

His presence in the backfield will also help take pressure off of the passing game and forces defenses to respect both aspects of Montevallo’s offense, which is what makes this team so dangerous. In addition to Gilliland, Orlandis Weeks, Justin Tyus and Joseph Anderson are all guys that will spend time in the backfield, making them one of the deepest positions on the field, and one the coaching staff is excited about.

As nice as all of that talent sounds, however, the offensive line is where Montevallo can either become a state-championship caliber team or a team that loses in the first round again.

The Bulldogs lose three senior starters at the position, setting the stage for new guys to step up. Seniors Rankin Allen and Xavier Bryant will be the two returning starters, and will have to be leaders in bringing along the newcomers.

Junior Hunter Bass and sophomore Cole Dennis are two physical guys that will step into the starting lineup, while Dylan Brantley should be the final guy. Jalen Hudson, Dylan Campbell, Carl Sellers and Jaylon McKenzie will battle for spots as well.

The offense is obviously loaded and has the potential to be the best in the state, but the defense will also be improved, and can be the difference maker in a historic season. If the defense can give up 20 points or less, it’s hard to imagine any team being able to keep pace with the Bulldogs’ offense.

Last year, that side of the ball gave up 27.9 points per game, but that’s a number that should lower this season.

Up front, the defensive line could be the deepest position on the team. Carter will play at defensive end, while offensive linemen Dennis, Allen and Bass will all play both sides as well.

Two other keys will be Jabrian Sullens and Jaqwan Hill. If those two put in the work, they could be dynamic players.

Behind that, one of the best defenders will play at the linebacker position in Jayvion Seay, who is a three-year starter that is expected to be a leader for the defense. He’ll be joined by seniors Grant Cordes and Blake Cummings. Running backs Weeks, Anderson and Tyus will also split time at the position.

The two-way train will also continue in the secondary with Evans, Cottingham, Gilliland and Harris all expected to be starters there, but with rest necessary for their offensive production, KamRon Goins and Jamion Prentice will both spend time there as underclassmen.

Prediction (9-1): The only thing that can beat Montevallo this year is Montevallo. The Bulldogs have everybody back from last year’s team aside from a couple of linemen, and with all of that returning talent, they should be even better. With an identical schedule, even if some of the other opponents are improved, Montevallo should win those games again with American Christian being the big question mark. That being said, if the Bulldogs go into the season too confident and think they are going to roll through everybody, that could quickly come back to haunt them. With several games being close tests last year, they have to have the mindset of playing all four quarters and making late plays to pick up wins. If they do that, they’ll easily be a top-five team in Class 4A.

By ALEC ETHEREDGE | Sports Editor ALABASTER – Having left her mark on the Thompson High School track and field... read more