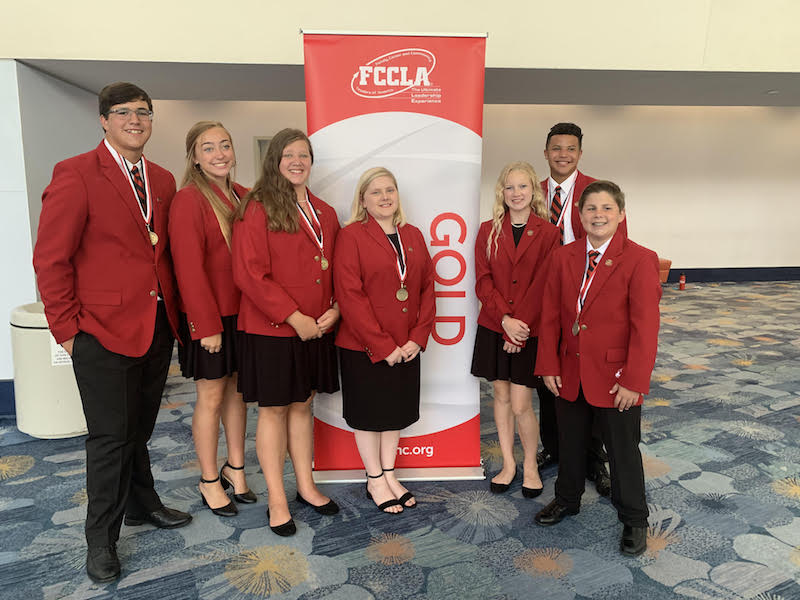 First in national rankings, a significant earthquake, and a tour of Los Angeles. These are just a few of the things that Columbiana Middle School’s FCCLA students experienced during their travels to California to represent the school in the Future Career and Community Leaders of America Competition.

The FCCLA is a student-led organization facilitated by teacher Samantha Pursley. Students in this organization learn skills that will prepare them to not only grow personally, but to become effective leaders and community members that can make a difference.

Pursley mentioned one of the student organization’s biggest supporters when she told us, “Shelby County Career Tech was so supportive. They really want to prepare our students for their path ahead whether it be in industry or trades.”

Three teams from Pursley’s group qualified for national competition in July following state competition in March. This trip was a giant endeavor for the seventh and eighth graders, many of whom had never traveled on an airplane before, much less traveled all the way to the west coast.

The three teams worked tirelessly for hours each week preparing and perfecting their presentations for the competition. Tackling topics like bullying and the dangers of energy drinks, the students led studies and workshops in their schools all year that informed their presentations for nationals and also benefitted their fellow students.

Their national rankings showed how their hard work paid off. The group who tackled interpersonal communications on the topic of bullying ranked first in the nation for their presentation. The illustrated talking group, who presented on healthy choices, ranked third in the nation. The final group, whose detailed project in the entrepreneurship category was the most involved of the three projects, ranked 12th in the nation. All three groups brought home gold, which means their scores were between 90 and 100.

The students had lots to say about their once-in-a-lifetime trip out west.

“It was an amazing experience to get to meet so many people from across the nation,” Tanner Stogner said. “I was proud to say I was from the small town Columbiana.”

Sara Elizabeth Shelton recalled celebrating their win: “It was fun to celebrate at the Fourth of July gala. We got to meet people from all over the country and Puerto Rico.”

Jaxon Griffith loved not only the competition, but some “extras” that he got to experience.

“The one thing I’ll probably remember the most was Disneyland,” Griffith said. “That was a bucket list event and I’ll never forget it.”

Others will bring home long lasting memories of something few in Alabama will ever experience: A significant earthquake.

“The earthquake was awesome. It was a once-in-a-lifetime experience,” said Alex Gillium. “It was scary but cool at the same time. Later our waiter came and asked us how we liked it.”

Alex Gillium said it best, “California is a different world, but I learned that our small town is just a little bit of the big world that’s out there.”