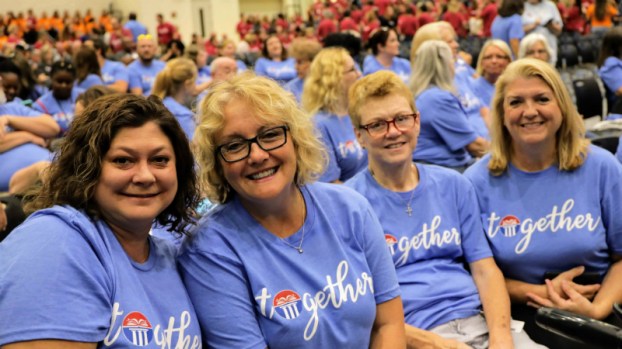 MONTEVALLO – Shelby County Schools employees are ready to IGNITE Together after gathering Aug. 6 at the University of Montevallo for a district-wide back to school celebration.

Shelby County Superintendent, Dr. Lewis Brooks, welcomed over 2,700 employees, who were all wearing “Together” T-shirts color-coordinated by school communities. Together We Sing, a combined choir of students of all ages from across the district, sang the national anthem.

The first guest speaker was Montevallo High School student Grace Carr, who also takes welding classes at the Career Technical Educational Center. Carr, who maintains a 4.3 grade point average taking both advanced academic and career technical courses, shared with teachers and district leaders the importance of encouraging students to pursue their dreams and goals. She said students who express an interest in both traditional academics and career technical pathways should be encouraged to do so.

She credited her middle school band teacher with inspiring her love of music and how to persevere through the hot days of band camp. In ninth grade, another teacher encouraged her to “think outside of the box” which led her to explore the man-dominated career-field of welding.

“The summer after that, I attended the Girls Can Camp,” she said. “This camp gives a select number of girls the opportunity to experience aspects of careers in electrical, plumbing, carpentry, and welding. It was at this camp that I first discovered my interest in welding and I realized I could have the best of both worlds, academic and technical training.”

To accomplish her goals, Carr took three Advanced Placement courses online during her junior year in order to also work on her welding certification at CTEC.

“I’m going to be completely honest with you guys, it was the biggest academic challenge I have ever had in my entire life,” Carr said. “But, during that time, an extremely kind English teacher took the time out of her very busy schedule to help me with my coursework even though I wasn’t in her class. It was that small action that helped and encouraged me to reach my academic goals.”

It was also during her junior year, that her welding instructor at CTEC encouraged her to excel at her own pace, rather than being constricted to an assigned curriculum. That has allowed her to progress in her welding coursework at an accelerated rate. She has already earned one welding certification from the National Center for Construction Education and Research and is on track to earn at least one, if not several more, certifications by the end of her senior year.

Carr closed out her speech by thanking teachers for their self-sacrifice and small acts of kindness, something she also plans to do as she mentors other students.

“I want you to remember that you never know when small actions or kind words of encouragement will touch a student’s life and change them forever,” she said. “I know this has certainly been the case for me.”

It was also the case for Dr. Brooks, who welcomed two of his former teachers to the event to share the impact they have had in his life and in shaping his own career as an educator. Linda Dunn was Brooks’ fourth-grade teacher at Hueytown Elementary and Elizabeth Ware was his art teacher at Pittman Junior High.

“Mrs. Dunn was the first teacher that I knew really loved and cared about me,” Brooks said. “Mrs. Ware saw artistic talent in me when there may not have been any. They had a huge impact on my life and I love them both very much.”

Oak Mountain parent Billy Ivey delivered an inspiring keynote message of how notes written on napkins and placed in his own five children’s lunchboxes over the past 14 years has recently turned into a national platform to make kids smile.

Ivey, who has been writing the notes since his now 19-year-old daughter was in kindergarten, shared that he posted a photo on his Instagram account about two years ago of one of his notes which then went viral on social media. Napkinisms was launched and has since given Ivey the platform to touch thousands of kids’ lives through partnerships with organizations like the Chick-fil-A Foundation and Children’s Hospital of Alabama.

Ivey said his own father was a huge inspiration for him, especially in the intentional act of writing notes as a way of expressing his love for his children. Ivey’s father passed away from Amyotrophic Lateral Sclerosis, also known as Lou Gehrig’s disease, just shy of his 16th birthday. When he was in the eighth grade his father left him a note to cheer him up after he failed to make the basketball team.

It said, “Attitude is everything. Today is not yet anything. Fill it with laughter.”

Ivey said he has spent almost 20 years in the field of marketing and advertising trying to make an impact on someone’s life through the “written word.” He just never guessed that it would be silly messages written in black Sharpie marker on napkins that would create the life-changing moment he had always hoped for.

He was pondering what was causing the messages to be so popular with people when his wife pointed out that is wasn’t so much what he was writing as much as the act of being intentional with his children as an involved parent. He has since been contacted by hundreds of people across the country about his “napkinisms” and how much they have inspired them to be more involved in their children’s lives.

One woman who spent much of her life in foster care told Ivey he had changed her perspective on having children. Ivey had given her hope that there are still men out there willing to be good fathers, unlike her own father who was abusive.

He reminded teachers that it doesn’t take much to make a big impact in the lives of kids.

FROM STAFF REPORTS The University of Montevallo will be hosting a single-day ACT Prep Course for high school sophomores, juniors and... read more