Thompson’s Jeremiah Alexander rated No. 9 player in the country for 2022 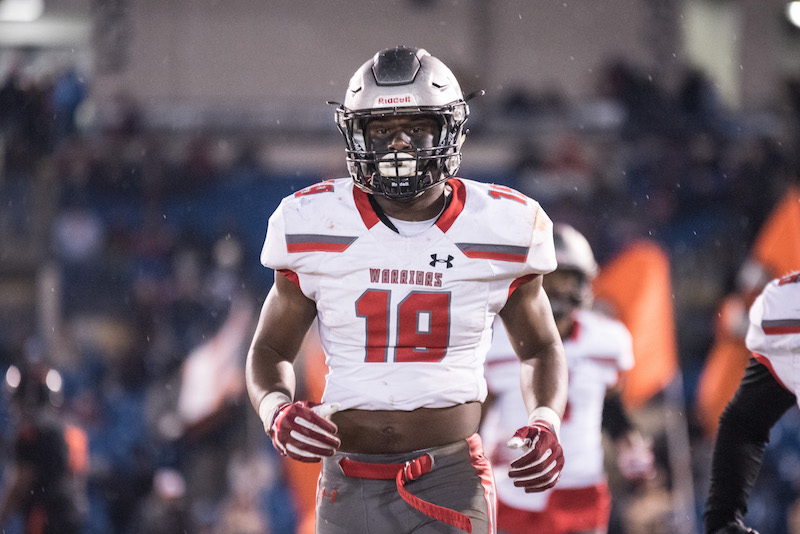 Thompson linebacker/defensive end Jeremiah Alexander, above, has been named the No. 9 player in the country in 247Sport’s first rankings for the Class of 2022. (Reporter photo/Keith McCoy)

ALABASTER – When 247Sports released its first rankings for the class of 2022, Thompson’s Jeremiah Alexander was rated as the country’s ninth best player.

The sophomore linebacker/defensive end for the Warriors is coming off a stellar freshman season where he busted onto the scene and earned offers from 13 different schools, including Alabama, Georgia, LSU, Florida and Tennessee in the SEC, as well as other top-notch Division I offers.

During his first year as a starter at Thompson, Alexander totaled 74 tackles, 16 tackles for loss and six sacks as an edge rusher.

That production was more than enough to earn him a spot as the only freshman from Shelby County to make the 2018 edition of the All-County football team.

Heading into his sophomore season, Alexander is now 6-foot-2, 220 pounds. That size is something that makes him as big or bigger than senior linebackers and senior quarterbacks and running backs he is trying to tackle and linemen he is trying to beat.

Maintaining his speed off the edge with his size growing is going to be a big key moving forward, but right now, it’s hard to imagine the normal high-school football player being able to stop his athleticism.

Alexander is rated a four-star athlete by 247Sports and has an overall grade of 93, which makes him the second overall weakside defensive end in the country behind Connecticut’s Wilfredo Aybar, who is rated fourth in the country.

While Alexander is considered the best player in the state for the class of 2022, he’s also one of the highest rated prospects ever at a national level from Shelby County.

While anything can happen over the next three years as a starter, he’s definitely going to be worth seeing in person while with the Warriors.