‘Excitement in the air:’ MHS staff, students optimistic on first day of school 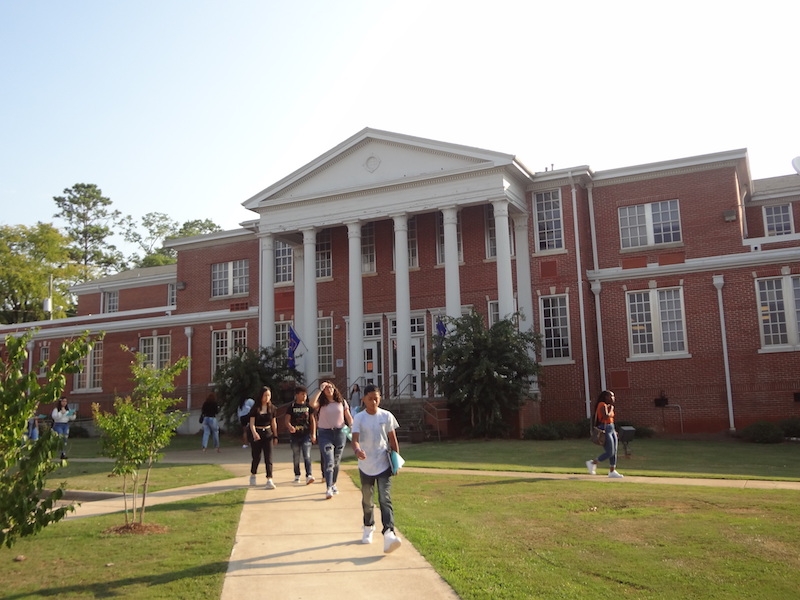 Students walk across the Montevallo High School campus on the first day of school in Shelby County on Thursday, Aug. 8. (Reporter Photo/Emily Sparacino)

MONTEVALLO – Students standing on the sidewalks in front of Montevallo High School on Aug. 8 knew what they were supposed to do when the bell rang shortly before 8 a.m.

As students walked into the building, MHS Principal Steve Bromley and other staff members stood by to help answer questions and give directions.

Bromley, who was approved as the school’s new principal in July, said the morning was “going well,” as about 400 students received their schedules and began rotating through each of their classes.

Bromley said a new, 30-minute flex period has been incorporated into the students’ schedule to accommodate club activities and intervention with core classes.

“That is once a week every other Wednesday,” he said. “I think it’s going to be really good for our kids. It gives them more opportunities, mainly for intervention and clubs.”

Sophomores Kari Ray and Cierra Cathey said they were excited about the new school year and all it brings with it, including football season.

“I feel like it’s going to be a good school year,” Ray said.

Teachers Paige Boyer and Jessica Gothard were also eager to get the first day started and meet their students.

“This is my seventh year teaching,” said Gothard, who teaches Geometry, Honors Geometry and a senior course called Math Investigators. “It’s always fun to see how the kids have grown through the summer. We always feed off the kids’ excitement.”

This is Boyer’s fifth year of teaching, but her first year at MHS. She is teaching 10th, 11th and 12th grade science classes.

Boyer said she felt like she was “returning home” since she grew up in Montevallo and attended the University of Montevallo.

“There is a lot of excitement in the air,” she said. “I think that’s the big word: exciting. I just love the area.”