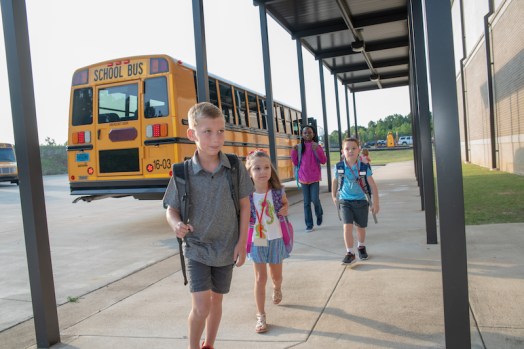 Students at Pelham Ridge Elementary School arrive on the bus for the first day of school on Thursday, Aug. 8. (Reporter Photos/Keith McCoy) 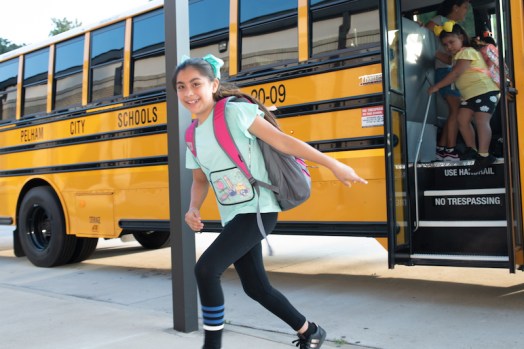 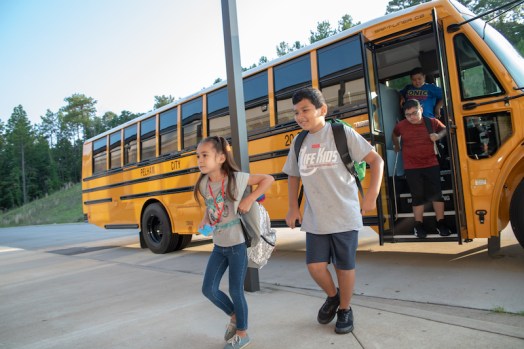 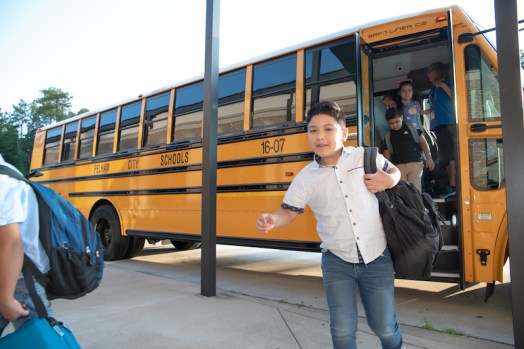 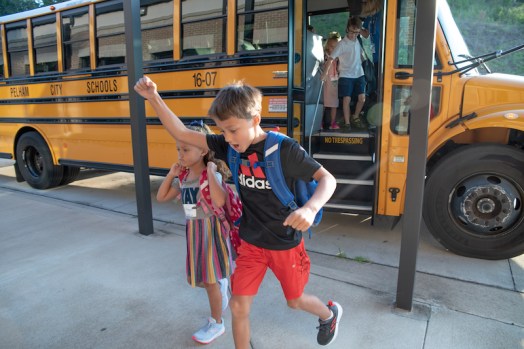 PELHAM – Approximately 860 students made their way inside Pelham Ridge Elementary School the morning of Thursday, Aug. 8, as the start of a new school year is underway for Pelham City Schools.

Pelham Ridge Elementary School Principal Robin Hollingsworth is entering her eighth year overall and fifth year as principal at Pelham Ridge and spoke about the expectations she and the staff have for students this school year.

“My favorite thing is just seeing everybody back and having all new stuff that we can show off,” Hollingsworth said. “Our theme this year is ‘be the kind of leader you would follow’ and we’re a Leader in Me school so we start from day one teaching the kids the seven highly effective habits in children that includes teaching them character, accountability and more.”

Teachers spent the first day taking the students around the school showing them procedures, where to walk, how to act inside the hallway and other expectations for the 2019-2020 school year.

Hollingsworth said that more than 300 cars came through the carpool line beginning as early as 6:45 a.m. the morning of Aug. 8 as the traffic for the first day of school went smoothly.

Hollingsworth also credited businesses and other members of the Pelham community that helped the back to school transition go smoothly.

“We had Smiley Brothers do a lot to help support the teachers with back to school starting so they offered lunch specials the past few days and delivered it to us,” Hollingsworth said. “Encore in Pelham redid a bunch of the furnishings inside and helped us pick several things out and Valleydale Church provided breakfast for the entire faculty and gifts yesterday so we’ve had a lot of community support to get ready for school.”

Another popular aspect of the first day of school included the Pelham Ridge PTO taking a class picture which will be available for parents to purchase to have as a keepsake.

As for other schools within Pelham City Schools, several projects took place over the summer to improve facilities including cafeteria upgrades and restriping the parking lot at Pelham Oaks Elementary, increased security features at the main entrance and main office upgrades at Pelham High School, refreshed exterior paint at Pelham High School’s spring sports field house and bathroom/concessions area at the stadium, new auditorium seating at Pelham High School, new fencing installed around the perimeter of the walking track and football field at Pelham Park Middle School and renovations to the new PCS Central Office began later summer and are underway.