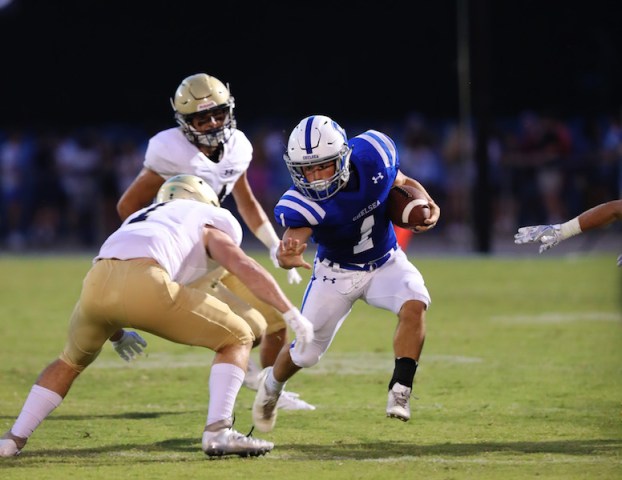 Chelsea running back Collier Blair will look to stabilize the offense, especially the backfield, with an intense quarterback battle heading into the season opener against Oak Mountain on Aug. 23. (For the Reporter/Cari Dean)

Looking back on Chelsea’s 2018 football season, it’s remarkable how close the Hornets were to being a 7-3 team after losing five games by 13 points or less, including three by four or less; but nonetheless, the overall record was 2-8 and last place in Class 6A, Region 5.

All of that, however, was under a first-year head coach, who didn’t arrive at Chelsea until the very end of May 2018. With little time to grasp an understanding of a new offensive philosophy and gain trust, the Hornets still went on to play that well in several games.

Heading into 2019, Chelsea’s players will go into year two of the Dustin Goodwin era with a much clearer understanding of what is needed and expected when it comes to running his offense, while Zeb Ellison’s defense tends to be consistent each year.

That combination should lend its hand to Chelsea putting forth a solid football team in 2019. But the question is how much better will they be?

The answer to that question largely depends on how Chelsea finishes games and how much better the offense, especially the quarterback position plays this year.

While Turner Griffin really came on strong last year and became an impressive quarterback down the stretch, Chelsea struggled mightily on offense early in the season.

Needing a solid quarterback to run Goodwin’s system, the success of the offense relies heavily on who emerges there.

During the summer, seniors Caleb Moore and Jordan Thomas, as well as junior Nic Neaves, were all battling for the starting job heading into fall practice. Just ahead of fall practice kicking off, former Coosa Valley starting quarterback Brayson Edwards joined the team as a sophomore to throw another talented playmaker in the mix.

Neaves is a smaller-framed quarterback that can throw and run the ball, while Moore is similar but much taller at 6-foot-5. Thomas is a more powerful quarterback that can take off running or air it out. Edwards is also a taller quarterback who threw for 1,578 yards with the Rebels as a freshman, and has worked hard at improving in the offseason.

All three are more than capable of playing, but one has to emerge as a leader and a player that understands how to run the system properly with the offense’s success relying on it.

At running back, the Hornets should be in a good spot with the return of junior Collier Blair, who has played big minutes since he was a freshman. He carries a smaller frame, but is extremely powerful and fast.

He spent a chunk of last year injured and playing at less than 100 percent, but he is now healthy and looks primed for a special season. Behind him, Chad Carbonie and Kijani King will add different dynamics to the position.

Chelsea will lose its leading receiver in Lando Nichols, but there won’t be a huge blow to the position. Senior Michael Gibbs should be the best target thanks to his experience and athleticism. Holton Smith will be a speedy slot guy that can take advantage of open field. Junior Chandler Pruitt will be the tallest receiver at 6-foot-2, while Gabe Ruffin will add another target near that same size with experience.

The good news for all of those guys, especially the eventual quarterback and the running backs, will be the return of three starters on the offensive line and five total experienced players.

Ty Adema, Charlie Parkinson and Baker Hix all return after starting several games a year ago. In addition to those guys, Grant Lamb, Luke Haywood and Cody Cooper will return experience.

Moving over to the defensive front, however, Chelsea will have to fill some big voids after losing most players from the line. It’s still unclear who will exactly fill out that position, but right now sophomore Garrison Maddox is one of the few that has stepped up heading into fall practice. Some of the offensive linemen could move to the defensive side and help out if needed with several moving pieces.

Behind that, however, the linebackers and secondary should be bright spots for the Hornets.

The linebacking corps is full of experienced leaders, including Colby Clements, Cole Berryman and Chad Carbonie. Those three will be key, while several of the playmakers in the secondary will move between the two positions.

On the back end of the defense, Ladarius Gary will return as a leader at cornerback, while Pruitt will be one of the leaders at safety. Jake Adams, Carson Freeman and Ruffin will all bring back experience.

Goodwin said his hope is for the linebackers and secondary to rotate close to 10 players between the two positions.

Special teams should also be a highlight with the return of kicker Cooper Neal and long snapper Xander Echols.

Prediction (4-6): This was a tough one because Chelsea may very well be better than 4-6 this year, but the schedule is brutal. A 1-3 start is plausible, and it won’t get any easier after that with matchups against Pelham, Helena and Homewood over the following three weeks. Winning two of those games would be massive and could quickly turn Chelsea into a solid contender. If the quarterback position comes along and receivers emerge, I think the Hornets could be a team that finishes the regular season above .500, but regardless, I do see them battling for a playoff spot.

By ALEC ETHEREDGE | Sports Editor It’s no secret at this point. The Calera Eagles struggled in 2018 both on... read more