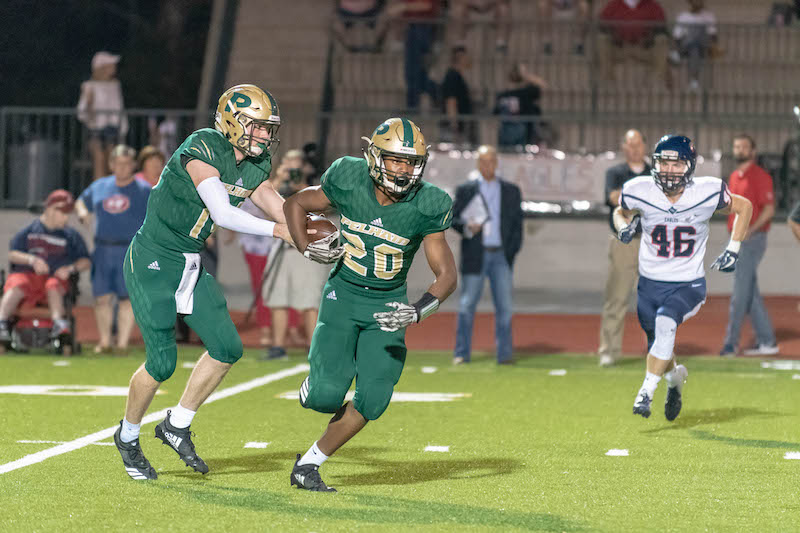 Pelham's Dylan Peterson, No. 20, will return to lead the Panthers in the backfield alongside quarterback Xavier Lankford. Those two will be veterans on a largely young team. (File)

The 2018 season marked the best for the Pelham Panthers under head coach Tom Causey, but two losses by 12 points or less in games they could have easily won kept it from being a remarkable 9-1 regular season.

The Panthers went on to draw Hartselle’s stingy defense in the first round of the playoffs, which led to an early exit from the postseason and a 7-4 overall record.

Now, heading into the 2019 season, the Panthers will be extremely young across the board, but hope to take the next step in the program after seeing success.

Replacing major contributors like Edward Gipson, Matthew Rye, Kasey Clark, Brandon Sledge, Brock Higdon and Ryan Jewell will be a big blow, but several young playmakers look primed to step up for Pelham in what appears to be a more open playoff race in Class 6A, Region 5.

The good news for the Panthers will come in the backfield at both quarterback and running back.

After averaging 32.5 points per game last year, having experienced players at both of those positions should help the offense continue to play at a high level.

Senior Xavier Lankford is ready to step in as the full-time starter after splitting time with Matthew Rye each of the last two seasons. Having taken time away from basketball to focus on football, Lankford has put in the work to become elite this year. He knows he has to be great and be a leader to help Pelham win this season.

The return of running back Dylan Peterson should help take a lot of the pressure off of Lankford. Peterson will be a junior this year, and as a sophomore last year, he ran for 538 yards and seven touchdowns on 83 carries in eight games. He is a difference maker when he’s on the field and is primed for a 1,000-plus yard season. He’ll be joined by Gabe Gamble and Isaac Brechin, as the backfield looks to be the strongest unit on the team.

Three of the top playmakers on last year’s team played at receiver in Clark, Gipson and Sledge, but all three are now gone, leaving a void to fill at receiver.

With Britt Bass being the only senior, the receiving corps will be young this season. Sophomores Grayton Rellich, J.D. Wilkins, Jaylen Tate and Christian Pritchett will all need to step up to help Bass, while junior Walker Lyle brings a good height to the table at 6-foot-2.

Three freshman also have the potential to have a breakout year, but still have some growing to do.

There will also be fresh faces on the offensive line with the losses of Nate Barron, Dakota McClaren and Gino Ramos.

Seniors Tyler Golden, Logan Atkins and Jody Morton will be guys that should step up as veterans, while sophomore Caleb Newell will be the biggest player on the line. Juniors Chris Quintana and Jesus Luna will also play important roles.

Pelham will also have to replace three starters on the defensive line, but seniors Brooks Cotton and Grayson Redford will bring back some experience.

Those two guys will be leaders, while junior Mason Duncan and sophomore Jake Ingram will likely step into big roles. Sophomore Isaac Cruce has also gained attention due to being the team’s most improved player from a year ago.

Perhaps the biggest loss on defense is Jewell at linebacker, who posted 110 tackles and 13 tackles for loss last year.

Replacing that kind of production at linebacker will be extremely difficult, but Matthew Plummer will add experience as a returning starter and senior. He’ll be joined by fellow seniors Tyler Zuiderhoek and Jack Fox, while Zac Ruston also brings back experience as a junior.

The front seven should be backed up by a pretty solid secondary thanks to several strong players, including three-year starter Phillip Duke. One of the more experienced players on the team, Duke had 64 tackles, five forced fumbles and two interceptions last year.

Cody Ferguson is also an experienced starter returning, while Chris Carter and Chase Christian each bring back playing time from last year’s defense.

On special teams, Salvador Jimenez looks to be the team’s kicker and will have to replace All-County kicker Greg Blue, while the return game should feature several dangerous athletes.

Prediction (6-4): The success of this year’s Pelham squad all depends on how quickly the offensive and defensive lines can come together with each having to replace three starters. If the offensive line steps up quickly and a receiver emerges, the offense could be every bit as dangerous as last year. The defensive side has plenty of upperclassmen with a ton of young athletes ready to make some noise at well, which could make them improved as well. They’re a young team that is probably a year away from being extremely good, but the schedule sets up well for Pelham to have a chance at finishing above .500 again this year. The first three games against Calera, Bibb County and Homewood will tell us a lot this year, while two of the final three against Jackson-Olin and Helena are on the road and could possibly be for a playoff spot. If young players step up and the Panthers can close out games, they’ll be in good shape again this year.