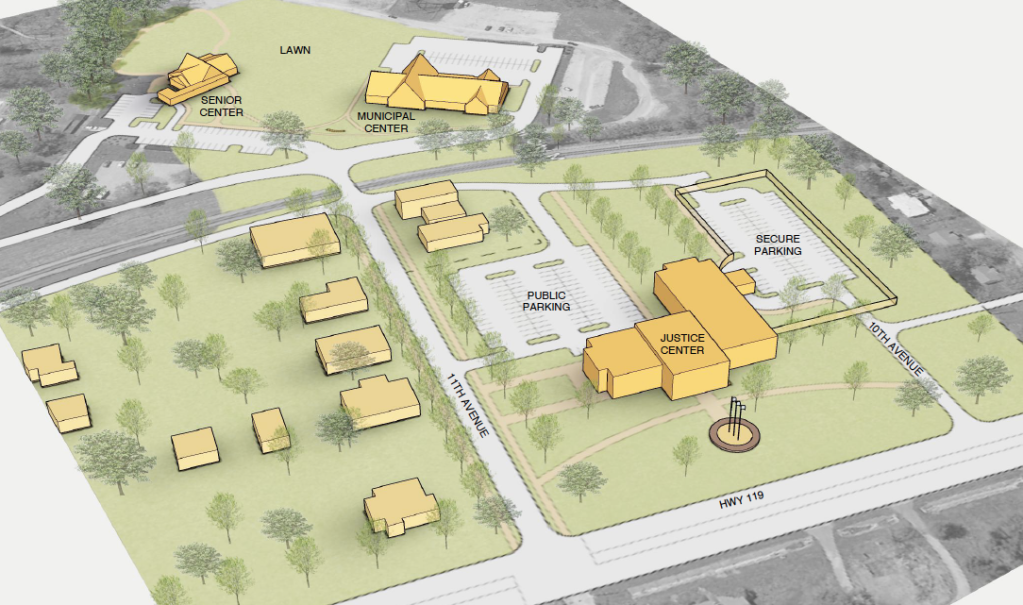 This map shows the conceptual plan for the Alabaster Justice Center. As the city’s architect continues to finalize design plans, the look of the building and placement on the land will begin to take shape. (Contributed)

ALABASTER – The city of Alabaster is moving forward with plans to acquire land in the Siluria area that will later become the site for the Alabaster Justice Center.

The Alabaster Justice Center will be a multi-use facility that serves as the headquarters for the Alabaster Police Department, Alabaster Municipal Court, court clerks and magistrates.

At an Alabaster City Council meeting on Monday, Aug. 5, the council authorized Mayor Marty Handlon to move forward with the acquisition of 18 parcels of land for the project.

The city completed appraisals on the individual properties and then approached the property owners to make an offer. Several of the parcels were placed under contract pending approval by the council.

Once the land is acquired, the city will have a total of 21 properties designated for the project. Earlier this year, city administrator Brian Binzer said the city purchased three other properties related to this project.

The Alabaster Justice Center will cost several million dollars to build, but Binzer said the city hasn’t narrowed down a cost estimate yet.

The city is working with Williams Blackstock Architects to interview members of different APD departments, judges, magistrates and clerks to assess each department’s needs in the new building. Binzer said the city is also thinking about what will be needed years in the future.

“The city will still be utilizing this building 40-50 years from now, so we have to be mindful of future needs as well,” he said.

Binzer said the facility will be an estimated 42,000-square-feet with about 200 parking spaces. He said the goal is to have the architectural design completed by the end of the year and break ground on construction near the beginning of 2020.

The decision to locate the Alabaster Justice Center in the Siluria areas was influenced by the city’s comprehensive plan that was adopted by the council in 2016. The comprehensive plan established a vision to revitalize the Siluria area by creating a city-center with mixed uses that tie into and enhance the Alabaster Senior Center and City Hall properties.

Alabaster’s current police station is near the intersection of U.S. 31 and Second Place Northwest, and has been in use since the 1950s. The police station was able to expand into the top floor of its current building after City Hall moved into its new location in 2013, but the aging building constructed several decades ago is struggling to meet the needs of a department serving nearly 30 times the population it did in the mid-20th century.