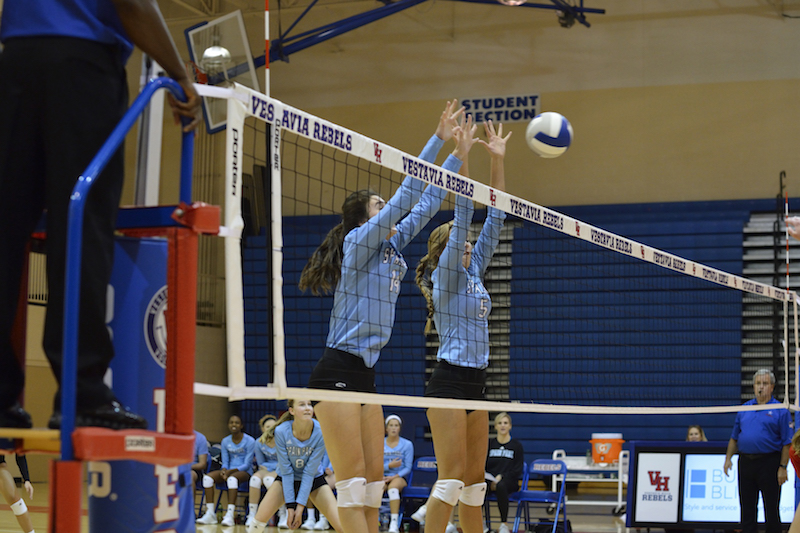 The Spain Park Jaguars will return several key pieces to their 2019 volleyball team, and while they still have a lot to work on, head coach Kellye Bowen has seen strong accountability from each player leading into the season. (For the Reporter/Dawn Harrison)

HOOVER – The Spain Park volleyball team went into last season with the goal of punching a ticket to super regionals, and they did just that. But going into the 2019 season, the Jaguars look back at that and say “So what.”

“We have a saying in our program known as ‘So what, now what,’” head coach Kellye Bowen said. “So what that you got to super regionals, now what are you going to do with it this year. That’s what we want to keep in our minds going into a new season.”

This year’s team will feature six seniors that will all play big roles on the team, and will also include sophomore Audrey Rothman, who has already verbally committed to Florida State University.

Last year’s run in the super regionals was cut short with a loss to Hoover in the first round of the tournament to bring the 2018 season to an end, which is why the Jags are looking forward to getting better and conquering the task of taking the next step in the program.

“Every day, our motto is to get better,” Bowen said. “We want to continue working hard. That leads to where you want to get to if you stay on your course. Obviously you’ll get pulled away from that but you have to fight back.”

The six seniors in Jessica Veal, Lexie Fowler, Paris Morris, Kendall Irwin, Alex Wright and Olivia Stark are a big reason the Jags do get better every day. Their leadership in holding the team accountable has been crucial this offseason.

“The girls know if our level of intensity isn’t there, they’ll stop practice and point it out,” Bowen said. “Them taking ownership in their program is huge for us right now. I just draw things up and teach. It’s their job to take ownership of their team.”

Bowen said her team will even call a sideline where they’ll immediately stop what they’re doing and start running sprints.

“They take that initiative without me,” she said. “It’s great when you walk in the gym and see that.”

One of the aspects Spain Park has been working on most this offseason is preparing for tight situations that are expected during the difficult schedule the Jags will face this season.

Bowen said she tries to put her team in as many pressure packed situations as possible leading up to the season so they know how to handle it.

“If you get into a tight situation during the season and haven’t been there before, you freak out,” she said. “I try to create chaos and frantic modes to help them handle those situations when they arise. You don’t really know how they are going to handle anything until they get out there and are tested though. There is no pressure of winning the area or anything like that during the summer.”

Bowen said the Jaguars still aren’t where they want to be going into the season, and that they’ll get frustrated sometimes in practice, but she just wants the team to progress and work through it.

“The goal is to progress every week and not to take steps back,” she said. “We don’t want to peak too early. There is so much that goes into the timing of being good.”

“Doing simple better” is the team’s motto and is something they’ll have to focus on closely throughout the season while also watching film, especially with a difficult schedule.

The Jags will face several top 10 teams, including an area that features No. 1 Mountain Brook and No. 9 Vestavia Hills.

“When you’re’ trying to be the best, you have to beat the best,” Bowen said. “We want to challenge ourselves early so we can be ready late.”

Spain Park will start the season on Thursday, Aug. 22, with a trip to James Clemens, and will host its home opener on Aug. 27 against John Carroll at 6 p.m.