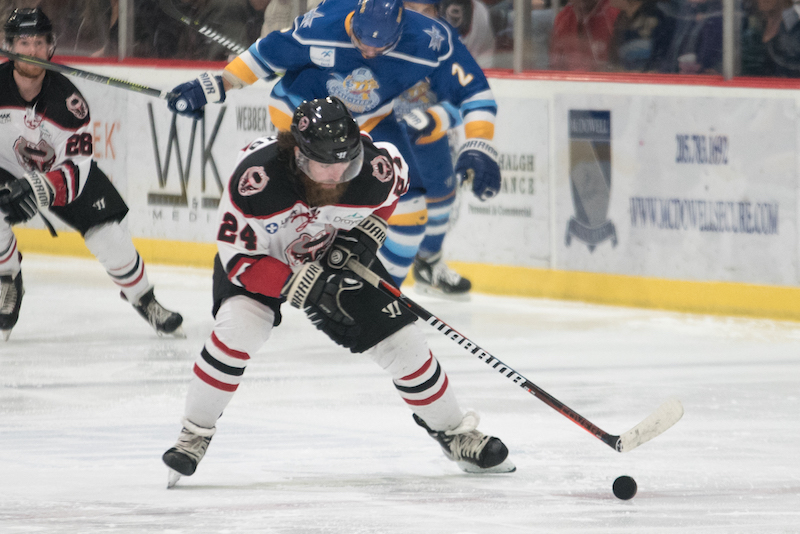 The SPHL will have a new playoff format during the upcoming 2019-20 hockey season that will get rid of the selection round where teams previously chose what opponent they wanted to play. (Reporter photo/Keith McCoy)

HUNTERSVILLE, N.C. – The Southern Professional Hockey League on Tuesday, Aug. 13, announced the 2019-2020 playoff format and several rule changes that were adopted at the Board of Governors Annual Meeting.

Previously the playoff format saw the top seeds choose who they wanted to play in the opening round of the postseason. Last year that saw Peoria, the No. 1 overall seed at the end of the regular season, choose to play five-seed Roanoke instead of being pitted against eight-seed Fayetteville.

With that decision, No. 2 overall seed Birmingham got the choice to play Fayetteville in the opening round and took it. The Bulls went on to win that series 2-1 before eventually advancing to the SPHL Presidents Cup Championship where they were swept by Huntsville.

The goal was to allow the higher seed to choose an opponent they felt like they had an advantage over during the regular season, but moving forward, it will be more of a traditional playoff setup.

While the top eight teams from the league will continue to make the postseason, there will no longer be the choice of who you want to play. It will instead be based solely on seeding.

Where the playoff arrangement will differ from that of a traditional postseason format will be in the semifinals.

The two winners will then advance to the President’s Cup Final for one last best-of-three series to determine the SPHL champion.

Some other changes to the postseason rules include teams not having to play shorthanded when a player is assessed a league suspension, while teams will also be allowed to have a 20th player on their playoff roster.

That player has to be an amateur player who was signed to an ATO with the team within the last 14 days of the regular season.