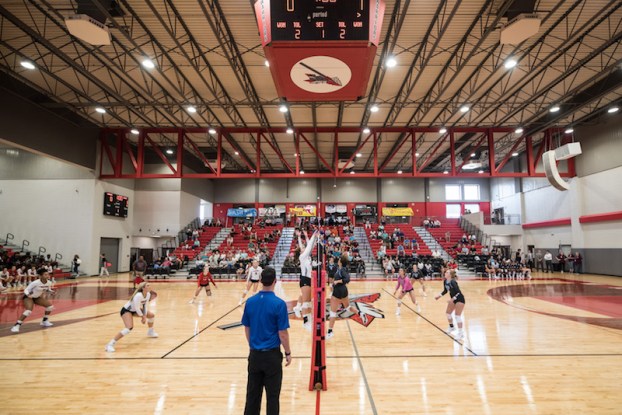 Thompson's volleyball team made it to super regionals last year, but has the goal of improving heading into the 2019 season. (Reporter photo/Keith McCoy)

Thompson volleyball ready to take next step in 2019

ALABASTER – After last year’s berth to the super-regional round of the playoffs, the Thompson volleyball continued to take strides in the right direction—something the Warriors hope carry over into the upcoming 2019 season.

Last year’s run saw Thompson advance to a super-regional matchup with the Mountain Brook Spartans where the season came to an end, but it was a Mountain Brook team that made it to the Final Four to end the season.

Heading into a new season, however, the Warriors feel prepared to take that next step despite the challenges that the 7A classification represents.

“I think that our offseason has been one of the most successful we’ve had in terms of player development,” head coach Judy Green said. “Physically, mentally and spiritually. We hit it hard in the weight room of course, but took time to do a book study, which also became valuable.”

The team spent time this offseason reading the book Chop Wood Carry Water. After each day of reading, the team would have discussions about what they read for at least an hour.

“We had some mighty incredible things come from those hour-long sessions and sometimes they even went an hour-and-a-half,” Green said. “They enjoyed it and it was something refreshing for them to do.”

The story, which is about a boy’s journey to becoming a samurai warrior, taught the players that they all needed to do their part every day in order to be the best they can be.

“It helped our program take another step in terms of development,” Green said.

The Warriors have also put in hard work during the offseason in the gym through an intense training program that has tested them each of the last two years.

Heading into a new season, the Warriors are expected to be dangerous again despite the loss of five seniors.

One reason for that confidence aside from the offseason work is the return of eight seniors to the floor, including Kolbi Reed, who competed in the North-South All-Star game this summer.

Last season, Reed led Thompson with 281 kills, while also adding 194 digs, and made play-after-play throughout the season. Last year marked her first at Thompson after moving from Briarwood, which meant a transition period of getting comfortable.

“It took her some time to get situated and comfortable,” Green said. “But now she’s flourishing. She’s really improved her game. She really can play any position on the court because she’s that well-rounded of a player. It goes without saying that she’s an incredible athlete. She’s worked so hard to get to the level of play she’s at.”

Already a great attacker of the ball at the net, Reed has added even more weapons to her repertoire for the upcoming season, which will make her extremely difficult to defend.

In addition to her, Kinsleigh Sabo will be a key contributor this season as well. Sabo will be coming off of her second ACL reconstructive surgery last year, and has now had surgery on both knees.

“She’s back and healthier,” Green said. “She’s playing stronger and better volleyball than I’ve ever seen her play.”

Sabo battled with whether or not she even wanted to come back and play again knowing the battle to get back, but she moved past that.

“She’ll be the anchor of our defense and passing,” Green said. “She’s really the glue that holds us together.”

Emma Huner, Isabelle Goolsby, Riley Parker and Molley Willis will be other seniors that will play important roles this season.

In addition to those players, junior Kelsey Tangle and sophomore Briana Wilson are two returning players that had special seasons as underclassmen last year.

Wilson posted 515 total assists, 227 digs, 46 kills and 41 aces, which led the team. This year, she will move from a setter position to an outside hitter spot.

“The light switch went on there and it has stayed on,” Green said. “She’s dialed it up this spring and summer for sure. She’s such a good all-around player. She can pass, hit and has great vision. She almost has a sixth sense about her that’s just a natural thing.”

With that move, it paves the way for Tangle to step up as the team’s setter this year, but Green said the biggest positive for this year’s squad is the ability to move anywhere on the floor.

“We’re going to be able to use anybody, anytime, anywhere,” She said. “That’s what will make Thompson great this year. We’ll have starters, but we may have kids coming off the bench that play big roles. It’s probably the deepest team I’ve ever had.”

Green knows Thompson’s biggest asset won’t be size, but they’ll make up for that by being fundamentally sound and limiting errors, which have cost the Warriors in the past.

“We won’t out-big you, because we aren’t’ that type of team, but we’re going to ball control you and force you to make errors,” she said. “In the past, we’ve been the team to make errors, but we aren’t that team anymore. We’ve learned how to be better than that. We will play a speedy type of volleyball that will be faster than any team we meet this year.”

It’s a deep team that has possibly the best back court Green has ever coached, which lends itself to that speedy style of play and limited errors.

Heading into the season, the Warriors are excited coming off of the super-regional berth with it being the first time most of the players on the team had experienced it, but they’re also sad about how the season ended, which has the Warriors motivated to get started.

“Last year was something they had never experienced, but now they are comfortable with it,” Green said. “It’s not the way they wanted it to end, but now there is a little extra in the gas tank.”

Thompson will open the 2019 season with a bang at home when they host Class 6A No. 1 Spanish Fort and Class 7A Hewitt-Trussville in a tri-match.

Ready for battle: Alabaster shows up for 2019 Warrior Day

By SETH HAGAN | Special to the Reporter ALABASTER – The sun continued to shine as the week ended and... read more