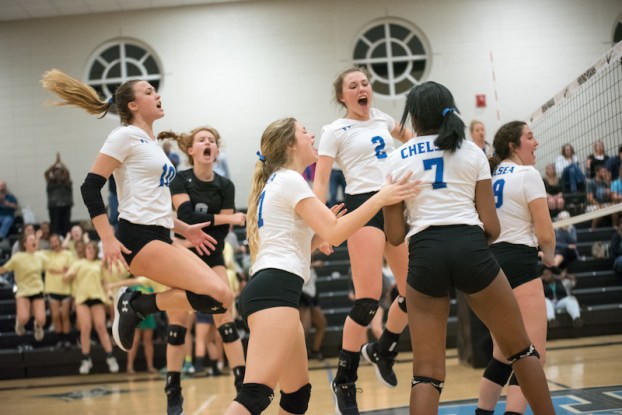 Chelsea's volleyball team returns six starters from last year's team and carry a chip on their shoulders after losing to eventual state champion Spanish Fort in the super regionals. (File)

CHELSEA – With the return of all six starters from a team that came up one match short of the state tournament last year, the Chelsea Hornets are poised for a breakthrough season in 2019.

The Hornets not only return those six starters, but return a seventh player with valuable experience as well, not to mention last year’s loss in the super regionals came to No. 1 Spanish Fort, who went on to win the 2018 Class 6A State Championship.

“They’re hungry,” head coach Jessica Pickett said of her team heading into the new season. “Last year seven of them saw how close they were. Spanish Fort has won the last couple of years so it was fun to have that taste in our mouths, but it was disappointing for them. Their goal is to be playing in the state championship, and this year they won’t be satisfied even just making it to state.”

It’s a team that won more than 50 games last year and competed in possibly the toughest area in the state with fellow top six teams in Pelham and Helena.

But that one loss to end the season still sits with them ahead of a new year.

“The first thing they talk about is losing to Spanish Fort,” Pickett said. “They didn’t think they played their best. Winning more than 50 games, coming out of a tough area and winning a couple of tournaments wasn’t enough. The girls aren’t satisfied with that.”

Pickett said the team has to focus on out working everyone this season in order to get where they want to be.

“Anybody can beat anybody on any given day,” she said. “We aren’t going to be the tallest so we have to focus on defense and playing smart volleyball.”

Part of what will drive that ability to improve and get better is the team’s competitiveness.

Pickett said it’s a team that absolutely can’t stand anything about losing.

“They’re pushing each other at practice in different ways,” Picket said. “We have competitive drills each day and they work super hard. This is such a competitive group that hates losing. They know that competitive side has to be there during those drills because it’s the attitude they need to take into each match this season.”

Those practices are able to remain so competitive and flow so smoothly because of the leadership of four starting seniors.

Bailey Drew McIntyre, Victoria Schmer, Sarah Moore and Zoe LaBreche will all go into the 2019 season looking to leave a legacy and set the standard for the future of Chelsea volleyball.

Those four have grown so much in leadership over the last yaer. They obviously have skill, but when they’re leading the other girls follow. It’s fun to see them do that as a coach.

“If we’re struggling, those seniors pull everybody together and get them to focus and regroup,” Pickett said. “A couple are vocal and others are leaders by example, but either way, the underclassmen really listen and follow their leadership.”

Schmer and McIntyre will be two keys because of their affect offensively and defensively.

Both All-County first team members last year, Schmer, who competed in the North-South All-Star game over the summer and was named MVP, will be the team leader defensively. Last year, Schmer totaled 792 digs and 132 aces for Chelsea as one of the best players in the state.

“Both have experience and see the court well,” Pickett said. “The lead by example. They don’t just talk the talk, they walk the walk. Each has gotten even better in the offseason thanks to hard work. They really feed off of each other and complement one another with one running the offense and one running the defense.”

Pickett said each of the seven returnees has grown a lot in the offseason not only skill wise by strength wise as well.

That’s lended its hand to success over the summer, which could have caused the team to become complacent, but that hasn’t been the case.

“It’s a group that isn’t satisfied,” Pickett said. “It’s been such a good summer that it could be easy for them to get satisfied, but they aren’t. Them being hungry is what is going to drive this team.”

In addition to their hunger and their returning skillset, it’s also a team with tremendous chemistry, something that sticks out more than anything to Pickett.

“It’s been very exciting as far as working together as a team and team chemistry,” she said. “That will be huge for us this year. It’s probably the best team chemistry I’ve had since I’ve been here. It’s been fun to watch that going into the year.”

Despite all of the individual talent on the team, their motto is “We over me,” with their main focus being on creating that chemistry and helping the player next to them.

“It’s very satisfying and I’m very proud of them,” Pickett said. “I have a son, but they are my daughters. I want them to be successful women, mothers and wives. We’ve been instilling those life skills into each of them. That’s what it’s all about for me, so it’s satisfying when they get that.”

Chelsea will open the season on Thursday, Aug. 22, with a tri-match at Alexandria High School taking on Alexandria and Lauderdale County. The Hornets will host their first home match on Aug. 27 in a tri-match featuring Clay-Chalkville and Oxford.