PARIS, Tenn. – With seven minutes remaining and Bassmaster High School National Championship on the line, Briarwood’s Grayson Morris and Tucker Smith were a fish short of their limit and in dire need of at least one more fish to repeat as state champions.

After catching four fish by 11 a.m., the fish stopped biting the rest of the day, which left the two anglers in desperation mode with time running out on their chance at winning a second straight national championship.

They had noticed a current throughout the tournament and decided to go to that spot, but with the heat, the water wasn’t what they had hoped.

“There should not have been fish there,” Morris said. “It was a little current, but it was 100 degrees and the water was still and like 90 degrees, so there just shouldn’t have been any fish there for any reason, but we decided to hit it because it was the last resort.”

“We were stirring like crazy,” Smith said. “It was super stressful over those last few minutes.”

In desperation mode, the two were scrambling, but all of a sudden, Morris hooked a 3-pound bass that saved the day and gave the duo their fifth fish. And just a few seconds later, Smith hooked a 2-pounder to give them their only upgrade of the day.

“I’ve never gone so crazy in my life,” Morris said. “We started yelling and going crazy on the boat.” 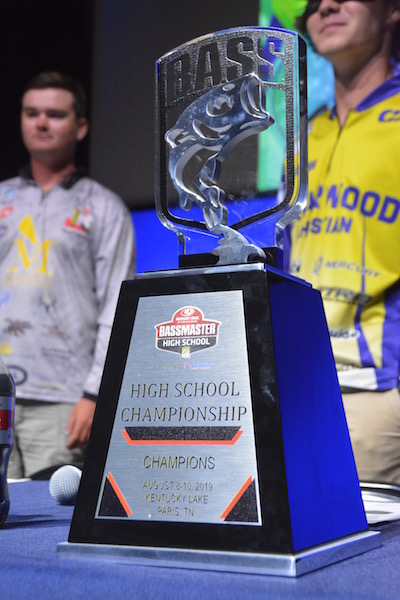 They also got some help from boatman J.T. Russell, who drove about as fast as he could to get the anglers back in time for weight in, and with 30 seconds to spare, the duo made it.

Having a dominant lead after day one with a tournament-best weigh in of 19 pounds, 11 ounces, and adding 17 pounds, 11 ounces on Friday, the two champion fishermen held a strong lead going into the final round, but that final fish in the last seven minutes of the tournament ended up paying dividends.

The duo of Mercedes Ellis and Gage Sherrod from Tennessee came back to put strong pressure on the two Briarwood anglers with a final-round total of 15 pounds, 4 ounces, but with that final fish, Morris and Tucker were able to hold them off by a total weight of 1 pound, 12 ounces.

With the win, the anglers became the first duo ever to repeat as Bassmaster High School National Champions, and both said it was one of the coolest moments of their lives despite several team accolades together and individual awards.

“We practiced from sun up to sun down for this event,” Morris said. “We went into it not expecting to do what we did, but we knew if we put the time in and did a lot of what we did last year, we would at least have a chance.”

Overall, this year’s tournament was much more difficult than last year’s with only four of the final 12 teams catching limits, only three of the final 12 catching weighable fish, 129 teams failing to weigh fish on Friday and 91 on Thursday.

“This year’s event was definitely a lot tougher,” Smith said. “Last year, we were getting 12-15 bites a day and this year it was probably closer to five-to-seven.”

The two still made it look relatively easy with a three-day total of 50 pounds, 1 ounce thanks to 15 total bass, which also won them $4,500 in scholarship money.

While Smith just recently graduated from Briarwood back in May and will be joining Russell as a member of the University of Montevallo fishing team, Smith still has one year left at BCS.

But no matter where each goes after the most recent accolade on a long list, they’ll never forget the hours, days and years of memories created on the water together.

“We’ve definitely spent a lot of time on the water. Probably too much time,” Morris said before cracking a smile, looking at Smith and laughing. “It’s obviously been a great experience. He’s always had my back and I just want to thank him for everything.”

“I really want to thank Grayson for always bringing good snack options on the boat. He always had some snacks for us,” Smith cracked back. “But he’s obviously taught me a lot and I don’t know what’s ahead, but our time together has been special.”

Smith said he’s hopeful for a repeat in the national championship, which is extremely possible after competing in the state championship by himself this past season, but he’s grateful for the time he’s had and the memories he’s created with Morris.

The 2019 Bassmaster High School National Championship will air on ESPNU on Sept. 1 at noon, which will give the duo a chance to re-live their thrilling victory one more time.