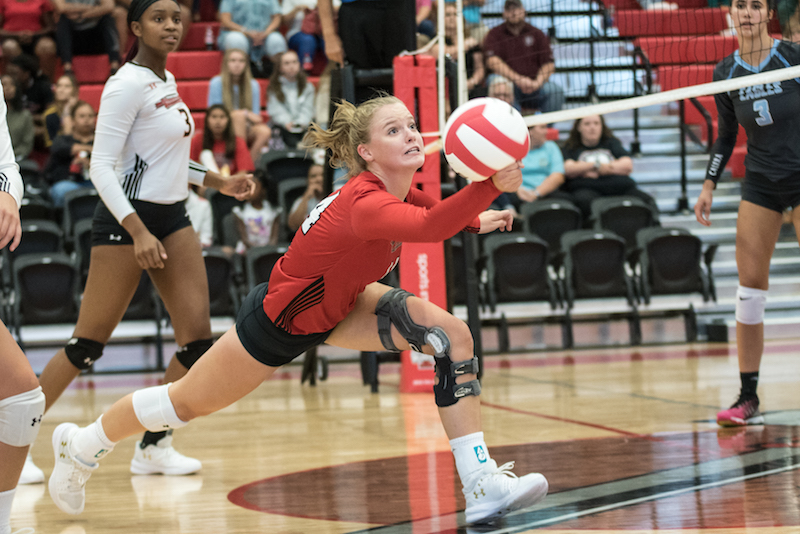 Kinsleigh Sabo, above, has torn the ACL in both her left and right knee, but is set to take the floor with her Thompson volleyball teammates as a leader for her senior season. (Reporter photo/Keith McCoy)

ALABASTER – When her left knee blew out during her freshman year, Kinsleigh Sabo was in shock, but when her right knee blew out exactly two years later on the same day, she debated giving up on volleyball—a sport she had played since third grade.

Heading into her senior year, Sabo knew it would be easier to give up and admitted there were times where she thought about doing so, but as a leader of the Thompson volleyball team, she persevered through tears and pain in order to get back and finish one last special season with her teammates and friends.

“I fought so hard for this,” she said. “Why not give it my all? Especially it being my last year. I owe it to myself, I owe it to my teammates and I owe it to my coaches—everyone who has supported me through this.”

Sitting in the car as a third grader on her way to her first volleyball practice, Sabo’s passion wasn’t the same as what she’s carrying into her senior year.

Instead, she was crying hysterically because she wanted no part of it after her mom signed her up for it.

Growing up, it took some time to fully appreciate the sport, but when she moved from Alabaster to Ohio the summer of her sixth grade year, it all clicked.

“The move there was really hard,” she said. “It was completely different and it took me a while to find a group of friends, but I started playing club level, which helped a ton.”

Playing club volleyball not only helped Sabo get acclimated to the change of scenery in Ohio by making friends, but it took her game to the next level.

“I got some great training from some really good coaches playing club ball up there,” she said. “It’s a super competitive sport in the north.”

She went on to play club volleyball up there for three years before then moving back to Alabaster midway through her eighth grade year.

“Just as I was starting to get comfortable up there, we moved back,” Sabo said. “It was tough at first, but I was thankful for my teammates now because they welcomed me back and took me in really quick.”

Moving into her freshman season at Thompson, Sabo earned a spot on the varsity volleyball team under head coach Judy Green, but that brought its fair share of challenges.

“It was hard being the little one, being with all the older girls,” she said. “I didn’t know if they liked me. It was tough, especially after just moving back.”

But senior Sierra Glover took her under her wing and helped make the transition smoother. Sabo was trying to gain an understanding of everything and Glover helped her with pointers throughout the year.

The season, however, was still a difficult one for her as a freshman on a team of veterans; and it got even worse when the first injury of her life derailed her year.

Never having been injured before, Sabo went for a ball that was set far to the outside. When she went to play it, she landed wrong trying to make a play.

“I came down and felt a weird pop,” she said. “I had never gotten hurt before, so I had no idea what was going on. I thought it was no big deal and I just tweaked my knee.”

Sabo went on to do a double bounce on the knee to test it thinking maybe she was fine and it wouldn’t happen again, but then she knew.

“My knee felt like it slipped and everything went numb,” she said. “It felt like there was a brick there and I couldn’t move.”

The play was still going on, but she was standing there in shock not knowing what was going on.

She went on to walk to the training room, which made her think she was going to be OK, and the trainer said she might even be alright, but she set up an appointment for the next day to get it checked out.

“I got the MRI done and thought I was going to be fine,” Sabo said. “The doctor came in, looked at me and said ‘Yeah, you tore your ACL.’ I didn’t believe it. I was in complete shock.”

She went into surgery three days later on a Monday and was given a timetable of six to eight months until she would be back. She had surgery, which was rough, and went through difficult times from not being able to get out of bed or put weight on the leg at all.

But with the help of her family, and especially her mom, she continued to make progress taking it day by day.

“I was determined to get back in six months, and I did,” Sabo said. “I got cleared six months later, and it was the best day ever.”

The process of coming back was extremely difficult, however. Sabo said it took a lot of time for her to regain confidence in her leg and playing ability, and that she started favoring her right leg more than before.

“At first, you’re always worried about it happening again so it’s scary,” she said.

She went on to wear a knee brace during her sophomore and junior seasons, but was back to playing and loving the sport.

Thompson went on to improve during her sophomore season, and then had a winning record her junior season when she moved to a leadership role at libero, but her worst nightmare then came to fruition again near the end of her junior season. 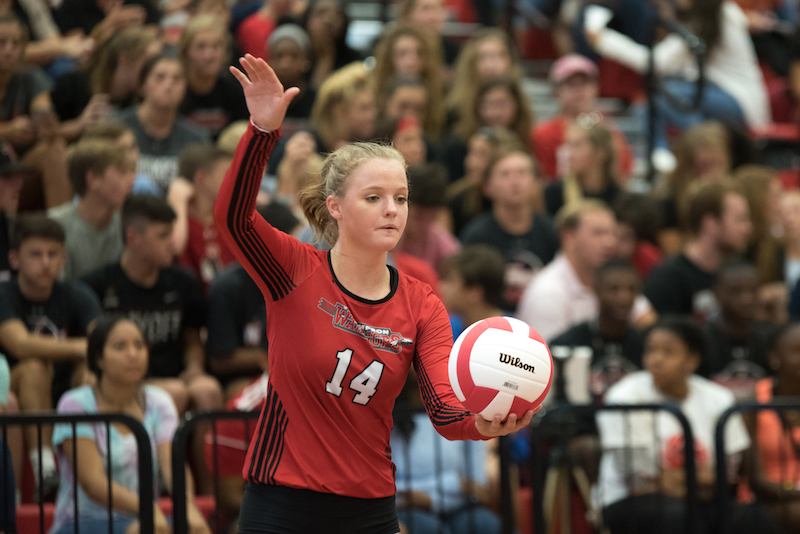 Two years to the day of her left knee injury, Sabo was going after the same ball as her teammate and tried to get around her but planted her right leg wrong.

“I felt my knee slip again just like it did the first time,” she said. “I knew exactly what had happened. I looked at my best friend on the bench and said ‘It’s my knee,’ and her face went white.

“I walked off with the trainer and just kept thinking to myself that I couldn’t do it again.”

Sabo was emotional, as were her mom and sister, but they kept telling her that she was just freaking out and they weren’t sure what the issue truly was yet.

“I knew though,” she said. “It’s just such a distinct feeling.”

Sabo went on to support her team at a tournament shortly after and recalls seeing her mom take the phone call where the doctor told her it was a torn ACL.

“I watched her get the call and saw her start crying and knew,” she said. “I immediately told myself it would be OK though. I had done it before and changed my mentality quickly.”

This time around, however, it was much more difficult.

Instead of the six months, it took her the full eight months to get cleared, just getting word in June that she was good to start playing again. The challenges and hurdles along the way brought the thought of giving up to her mind.

“It was so much harder this time,” she said. “There were a few points where I thought about how much easier it would be to give up. I asked myself, ‘What am I doing this for?’ But I love the game and couldn’t imagine not playing.”

“It’s nothing short of a miracle,” Green said of her libero. “She battled not wanting to play, but got past that this summer, and now she’s set to be the anchor of our defense, and honestly, she’s the glue that holds this team together.”

Going into her final season with the Warriors, with a knee surgery on each leg behind her, Sabo is glad she was so determined not to give up because now she gets one last season with a special group of teammates that have supported her through the difficult times.

“I really do just want to lay it all on the line,” she said. “I know every time I touch the ball it could be my last. In practice I want to leave every day knowing I did everything I could to learn and grow.”

After Thompson advanced to the super regionals last year, she knows this year’s team is special and she’s excited she gets to be a part of this group one last time.

“It’s crazy how good our team chemistry is,” Sabo said. “I’ve been here four years and haven’t ever seen it this good.

From the libero position, Sabo will be one of the biggest leaders of the team from a vocal and defensive standpoint.

That’s something she learned from Green last year that would help her make a difference on the floor.

“Coach Green told me I need to say something every play,” she said. “She made a really big emphasis on contact like high fives and those little things.

“I think back to when I was a freshman and that senior gave me a high five. It really can mean the world to some of our younger players.”

As a member of the All-County team last year, Sabo posted 258 digs and 18 aces last year, and will be key again this season.

Going into her senior season, she’ll look to continue that impressive production and her leadership role coming off her second surgery, but the most important aspect of the 2019 season will be giving it all with the team she’s been playing with since third grade.

“It’s going to be bittersweet,” she said. “We’ve come so far and have been together since YMCA ball. We mesh so well, we feed off each other and we’re there for each other off the court as much as we are on the court. It’s like a family and it means the world.”