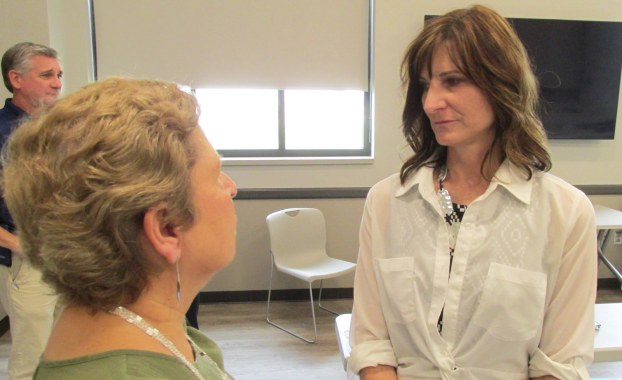 Pelham City Manager Gretchen DiFante was the featured speaker for the Pelham Business Alliance at the Pelham Public Library on Aug. 8.

BY MICHAEL J. BROOKS / Special to the Reporter

PELHAM – Pelham City Manager Gretchen DiFante was the featured speaker for the Pelham Business Alliance at the Pelham Public Library on Aug. 8. She noted the month of August marked her second anniversary in the position.

“Pelham is a progressive city, and it’s been rewarding for me these past years,” she said. “We have an enormous number of small and medium-sized retail businesses. I’ve enjoyed learning more about them and how the city can relate to them in this challenging time for retail in America.”

DiFante said at the time of her hiring, the city moved from the mayor-council management model to council-manager model, thus freeing the mayor to do other assignments. Though the council-manager model is not as common in Alabama, it is the fastest growing model in the nation for municipalities, she said.

“The city council is still our decision-making body, or the law-making body, if you please,” she said. “The council hires and fires the city manager, so they’re in charge of the city. My job is to try to bring sound management to all facets of city government.”

DiFante said she oversees six department heads in Pelham and leads in long-range planning and budgeting.

DiFante said Pelham’s fiscal budget is $65 million. In contrast, the City of Vestavia’s budget is $53 million, and Alabaster’s is $49 million.

DiFante said the least glamorous part of her job is water and sewer maintenance and expansion.

“Nobody gets terribly excited over these matters, but they do affect us all,” she said. “We’re hearing a lot about infrastructure these days, and if we don’t maintain, we’ll have more major problems down the line. We want to be accountable to our citizens and spend wisely.”

Pelham Mayor Gary W. Waters commended DiFante on her work and joked that he had been willing to take a pay cut to bring her aboard.

The mayor noted that the week’s council meeting had been highly productive.

“The council gave approval for the developmental phase of the ‘Canopy’ and ‘Campus 124’ projects, after approving an incentive package several weeks ago,” he said.

The Canopy project will involve some 40 acres near the municipal center and will include residential, retail and hotel facilities close to the Pelham Amphitheatre, he said.

“The Valley Elementary School project is modeled after Campus 805 in Huntsville,” Waters said. “There’s normally a zero market for abandoned schools, but the renderings on our city Facebook page are gorgeous. We’re excited about this development.”

“We have projects like our ‘Shop Local, Shop Pelham’ emphasis in the spring, and we meet periodically to foster relationships and address mutual concerns,” she said.

The next meeting of the PBA will be a breakfast meeting at Empire Autohaus on Yeager Parkway on Sept. 9. The PBA website is pelhamshoplocal.com.

BY SHIRLEY LOEWEN / Special to the Reporter On March 5, the National Society of the Daughters of the American... read more