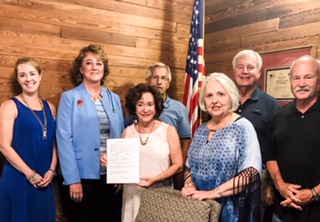 The National Society of the Daughters of the American Revolution founded a new Chapter in the Oak Mountain area of north Shelby County in March 2019. (Contributed)

BY SHIRLEY LOEWEN / Special to the Reporter

In 1955, the NSDAR petitioned Congress to set aside Sept. 17-23 annually to be dedicated for the observance of Constitution Week.  The resolution was adopted by the U.S. Congress on Aug. 2, 1956, as President Dwight D. Eisenhower signed into Public Law #915.

As such, members of the Oak Mountain Chapter of NSDAR requested a proclamation be issued by Indian Springs Village recognizing Sept. 17-23, 2019 as Constitution Week showing support for this great document.  At the Aug. 6 Indian Springs Village Town Hall meeting, Mayor Brenda Bell-Guercio signed and presented to the Oak Mountain Chapter of NSDAR, a Ppoclamation acknowledging this commemorative event.