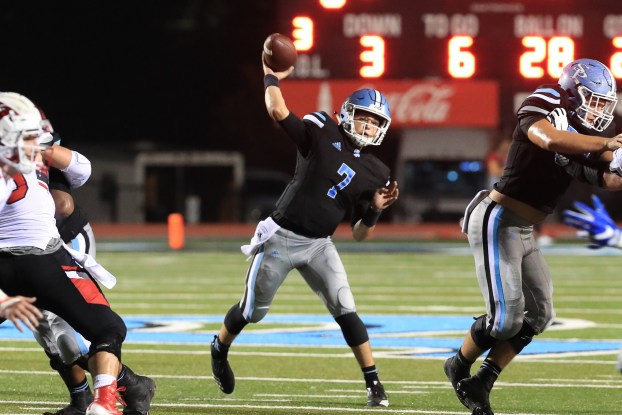 HOOVER – Coming off a 4-6 season, the Spain Park Jaguars are hoping to get back to winning in 2019 after their first losing season since 2011 and first under head coach Shawn Raney.

While last year featured its share of disappointment, especially during a six-game losing streak and a 1-6 start, the Jags did bounce back to win their final three games in a row by a combined 105-31. Those 105 points marked more than the Jaguars had scored in the first seven games combined.

They also lost three games by 10 points or less, including games against Vestavia Hills and Mountain Brook that kept them out of the playoffs.

Winning those close games and getting off to a fast start have been emphasized by the Spain Park coaching staff this offseason, while the players want to prove last year was a fluke.

If this is going to be a bounce back season, the Jags will have to rely on a lot of new faces and a new style of play. While they’ll have older players set to step in, most will be new to the starting lineup, while they’ll also be smaller than they have in year’s past.

With those new players, Spain Park may be more spread out than in years past where the Jags have relied heavily on the power run game and a physical defensive game plan.

One of the most confident positions on the field will be at quarterback with Harrison Barker stepping in as the starter for his senior season.

The starting nod comes just two years after his brother, Braxton Barker, put together an All-County season at the position. The son of former Alabama National Championship-winning quarterback Jay Barker, Harrison has the tools to lead and works as hard as anyone on the field according to Raney.

While this will be his first year to start, he did get some experience splitting time with Mason Pronk at the position last year and understands the position and how to read the defense properly.

One of the more interesting changes this season will come at running back. With the departure of 1,000-yard rusher Jalen Henderson, the Jaguars are in the unique position of having no power backs this season, which they have become accustom to.

Seniors Michael Callens and Tinazj Means are both going to be trustworthy running backs, but both stand around 5-foot-8, 155 pounds. They’re shifty and fast with great vision, which means they can make a man miss, and if they do, they’ll likely reel off a big gain.

But the lack of a power back will cause the Jags to move away from that between the tackles run game that sees them try to control the flow of the game, as they’ll likely spread the field more this season. Sophomore Justin Pegues is already around the same size as Callens and Means and will get a lot of playing time as well.

At receiver, there may not be anyone who will beat you every play, but there will be several players who know how to run routes and won’t drop the ball.

Senior Jacob Jenkins will be one of the leaders at the position. He can play H-back, tight end or out wide as a versatile player. He’ll be joined by David Moultry and Jalen Ward, who both got playing time last year as freshmen. Junior Cooper Kelley is another exciting playmaker, while senior George Hill should contribute as well.

Like the running backs, the offensive line will be smaller this year with three sophomores starting. The good thing about that is their ability to block in space and be mobile when it comes to this year’s offense. Stephen Olsen, Jackson Boler, Connor May and Andrew Moses should all play major roles this season, while Brayden Boggan and Chaz Bounds add veterans for depth.

The defensive side of the ball will also feature several new faces, especially in the front seven, but most of those new faces will be seniors who understand the system and have waited their turn.

Up front, Jake Horton will be the only returning starter at defensive end after playing in every game a season ago. He’ll be joined by DQue Hill and Jay Tibbs, who are both seniors ready to contribute. Senior Goodwin Tidwill and juniors Samuel Garivay and Joseph Heatherly will also play a role.

There will also be several veteran players at linebacker led by returning starter Richard Moses. The rest of the unit has new faces, but all have been part of the team for a while. Zach Rushing, Michael Neal and Chris Mancill are three of those players ready to step in and have a special season. Rushing is coming off a knee injury, but should be a great leader with Moses.

Behind that veteran front seven is possibly the brightest spot in the secondary, which returns all but one key player. Colton Ledbetter is possibly the best athlete on the team and will be the leader at safety as a three-year starter on defense.

He’ll be joined by Dolan Wilson, Braden Brock and Michael Ogletree at safety. At cornerback, sophomore Patrick Davis is an exciting player to watch, while Jonathan Williams is extremely physical.

On special teams, junior Drake Tabor should be one of the best kickers in the county this season, while Neal Parkin will handle punting.

Prediction (6-4): Spain Park should automatically have four wins between its first two and last two games all being winnable, leaving three toss-up games against Vestavia Hills, Mountain Brook and Oak Mountain, and three difficult games against Hewitt-Trussville, Thompson and Hoover. This year’s team can really prove a lot in their first four games if the Jags can get off to a 4-0 start, which would mean wins over Vestavia Hills and Mountain Brook. Last year, those games kept them out of the playoffs. If they are 4-0 overall and 2-0 in region play through the first four weeks, this team instantly becomes a legitimate threat to compete for the region championship. Going into the season, however, there is a lot of unknown surrounding new players and size. If the Jags can adjust to their size offensively, they’ll have a chance to make noise.