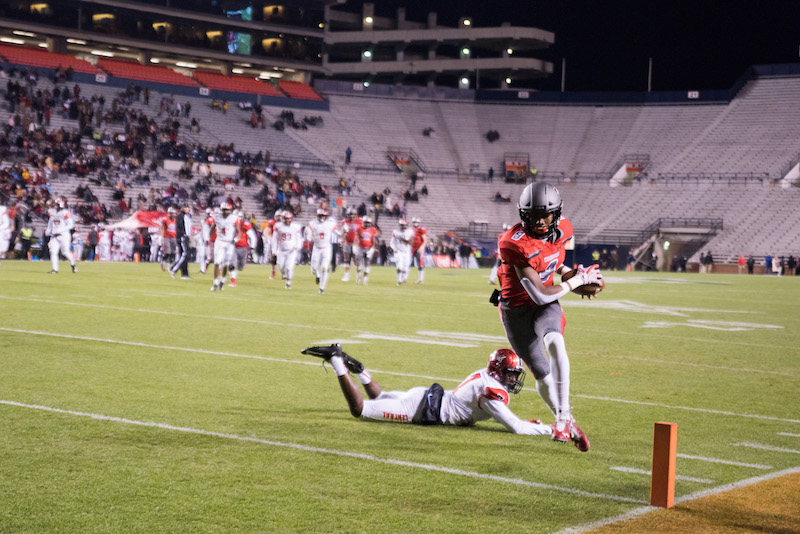 ALABASTER – When you lose a quarterback who threw for 7,054 yards and 71 touchdowns in two years and a running back who ran for 1,403 yards and 15 touchdowns as a senior, you expect there to be some rebuilding, but the 2019 Thompson Warriors are ready to let everyone know there won’t be a drop off in 2019.

After advancing to their first state championship game since 1982 last year and having made it to at least the semifinals each of the last two years with a combined record of 23-3, Thompson has turned the page into a new era, and this year is expected to be no different.

The Warriors will lose more than just Alabama quarterback Taulia Tagovailoa and Iowa running back Shadrick Byrd this season thanks to the departure of All-State lineman Amari Kight, who is now at Alabama, All-State linebacker Will Conner, who is now at UAB, and several other key pieces to last year’s team including Jayme Simmons, Jalen Bustamante, Eric Mizell and Seth MacMillan.

But this year’s squad won’t be any less exciting to watch and should have just as lofty expectations after the last two years.

The task of replacing Tagovailoa will go to senior Sawyer Pate, who has been groomed by the former quarterback as well as head coach Mark Freeman. He won’t be a replica of Tagovailoa, but he’ll be his own style of quarterback, which should be more than enough this season.

Pate got to play some last year in games that were out of reach, while also playing the majority of the state championship game against Central-Phenix City. In the spring game, he threw for 333 yards and five touchdowns to show he’s more than capable of airing it out in Freeman’s system.

A reason he has the potential to be extremely dangerous this season is the return of almost every top target out wide.

Leading receiver Mike Pettway will be back after totaling 1,208 yards and 17 touchdowns last year, and the two have a great relationship that should carry over to the field.

Also back will be Tre Roberson was injured last year, but should add another top target this season after catching for 100-plus yards in the spring game, while J.B. Mitchell posted 788 receiving yards and six touchdowns last year.

Sam Reynolds adds a trustworthy fourth target, while other players could also step up to add depth. If Pate makes the right read of the defense and the correct play is called, there will be an open receiver for him to hit on almost every play.

Even with the loss of Byrd at running back, Thompson will also have three players ready to step in and fill that role as well.

Sophomore Brandon Franklin will be new to the team and is already a player who has the staff excited with a size of 6-foot-1, 215 pounds and plenty of growing left to do. He’s the son of former Auburn player Byron Franklin Sr.

He’ll be joined by returnees JoJo Gaiters and Jarrett Crockett, both of whom got experience last year and showed the ability to break off big runs. With three athletes at the position, the running back position is a unit that should thrive as long as the offensive line can get over some inexperience.

The reason that will be key is due to the loss of three key starters in Kight, Simmons and MacMillan.

They’ll be replaced by three juniors this season including Dylan Walker, Connor Howard and Michael Specht. Walker marks the only one with playing experience, but all three have good size. The problem becomes depth behind them as players are still battling to fill out the position.

For Thompson to be successful with all of its offensive weapons, the offensive line’s growth as a unit early in the season will be crucial.

That same concern will be prevalent on the defensive front as well thanks to the losses of Mizell and Will Hoffman, who combined for 24 tackles for loss and nine sacks last year.

Seniors Damien Ugbo, Montaj Cook and Tyger Faavi should all be important to the transition of the defensive line thanks to being veterans with some experience.

Behind that, juniors K’Marion Hambright, Greg Green and Anthony Butler should step in to fill big roles as well. While they aren’t as experienced this year, the line has the veterans in place with the right size to be successful.

The linebacking corps will also take a hit with the departure of Will Conner’s 135 tackles, but the return of Jeremiah Alexander should help. He’s an edge rusher who was recently ranked as the No. 9 player in the country for the class of 2022 and brings back 74 tackles, including 16 tackles for loss and six sacks.

Owen May will join him and brings back experience, while Jack Vanzant and Carson Rockett will also have to step up.

The inexperience of the defense will carry over to the secondary where the Warriors will lose both Bustamante and D.J. Douglas, who combined for 11 interceptions last year.

A freshman will actually be one of the key playmakers at the position in Tony Mitchell. Standing at 6-foot-1, 180 pounds, he already has SEC offers. In addition to him, Gavin Shipman and Tristan Woody are juniors who will play at safety.

Special teams should be a highlight this year with the return of Evan McGuire, who is one of the state’s best kickers going into 2019.

Prediction (8-2): The potential is there for the Warriors to be every bit as good as they have been the last two years, but they lose a ton of production. While I don’t think the offense will take a huge hit because of the amount of talent they have back, the offensive line will have to grow in a hurry to help that come to fruition. It’s the defense that is the worrisome spot. Losing almost all of their top production throughout the defense, that side of the ball will have to prove themselves as the season goes along. I think the first team is strong, but they’re young and so is the depth behind them. The natural talent is there, and if the defense does end up becoming as good as last year’s, Thompson will be competing for another state championship.