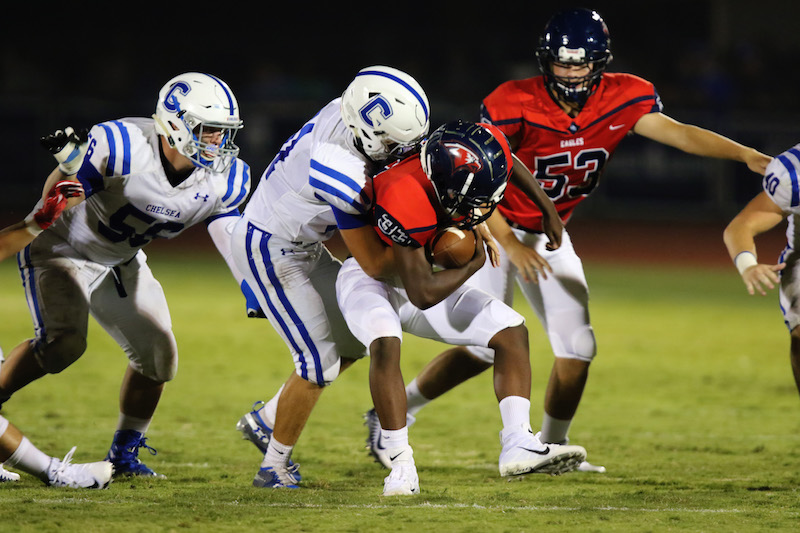 The Oak Mountain Eagles will travel to Chelsea this Friday to take part in the first Game of the Week of the 2019 high school football season. (For the Reporter/Cari Dean)

Go ahead and hit the panic button because football returns this week.

We’ve waited 261 days for the return, but this Friday, Aug. 23, the action returns with 10 exciting opening-night games set to take place under the lights.

The first week of high school football across Shelby County will feature eight rematches, two in-county matchups, one Saturday game and several teams looking to get off on the right foot.

This week is by no means a make or break for any of these teams, but it’s a chance for several teams to put last year behind them and show that this year is going to be a different story.

It’s time to lace up the shoes, strap on the pads and slip on the jerseys. Let’s get rolling.

Game of the week: Chelsea vs. Oak Mountain

These two teams will be meeting for the eighth time this year and for the fourth year in a row, and with the two being separated by a few miles of U.S. Highway 280, it’s a rivalry that starts the season off with a bang. Last year, the Eagles dominated in a 42-9 victory behind four touchdowns from freshman Evan Smith to move to 6-1 in the series all-time. This year, the Eagles will return Smith at quarterback and a strong group of runners, but will also have some new faces.

The Hornets should be improved under second-year head coach Dustin Goodwin, but a four-way battle at quarterback will have to be decided quickly if they want a chance to take down the Class 7A opponent. With both teams going 2-8 last year, this game offers the winner a chance to gain some needed confidence early in the 2019 season. Chelsea will be improved across the board and won’t go 2-8 again, but Oak Mountain has a returning starter at quarterback and a classification advantage, which should make the difference. Oak Mountain 35, Chelsea 20

This game will represent more than the game of football as Thompson hosts the inaugural Go Gold Bowl to benefit Children’s of Alabama and the Elaine Roberts foundation to raise money and awareness for childhood cancer. On the field, Thompson will play host to Davidson at 7:30 p.m. following a matchup between Clay-Chalkville and Dotahn.

Thompson should be the favorite coming off an 11-2 season compared to Davidson’s 6-5 campaign in 2019, but several new faces will suit up at key positions for the Warriors. There is no more Taulia Tagovailoa, Shadrick Byrd, Amari Kight, Will Conner and Jalen Bustamante. But the talent will still be there with the return of three top targets at receiver, a three-headed monster at running back and a capable quarterback in Sawyer Pate. While it may take a quarter, expect to still see plenty of fireworks from Thompson’s offense, but keep an eye on the defense and its inexperience. How well they play can be a sign for the rest of the season. Thompson 31, Davidson 14

Needing a fast start, this is an important early game for the Spain Park Jaguars against a Class 6A opponent. Last year, the Jaguars picked up a 24-14 victory at home, but now they hit the road. This will give us our first good look at a team that is going to have a lot of new faces on the field. The good news is that most are upperclassmen and know the system well after waiting their turn, but with an entirely new offensive line and defense, the transition in game one may not be the easiest.

The Jags are also going to spread the offense out more this year with a smaller backfield and offensive line. I do think there are some talented playmakers that will step up, and quarterback Harrison Barker should be poised enough to lead the Jags to a win. It may be a tight one, but Spain Park should see a lot of players gain needed confidence at the end of the night. Spain Park 28, Hillcrest-Tuscaloosa 20

Early in last year’s game, it looked as if Pelham was going to be in store for some offensive struggles and Calera was going to start 1-0. Instead, the Panthers were able to overcome a 21-7 deficit at the end of the first quarter by outscoring the Eagles 38-3 the rest of the game for a 45-24 victory. Calera went on to finish 1-9, while Pelham had its best season under Tom Causey and made it to the playoffs. I’m very intrigued to see how this year’s matchup pans out.

Calera will by far have the most experience of the two teams with a lot of senior talent, but will also be playing several on both sides of the ball. Pelham will have new faces, but more depth and confidence at quarterback and running back. There is really nowhere to go but up for the Eagles, so they’ll be better this year, while Pelham has a lot of unknown aside from Xavier Lankford and Dylan Peterson. I expect a close game and for Calera to come out with vengeance on its mind, but the depth of Pelham may be too much. Pelham 24, Calera 21

Helena has been hyped up this offseason, and rightfully so after the way last season ended and now returning everybody with a second-year head coach, but now it’s time to prove it on the field. Despite a new head coach at McAdory, the Huskies get a huge test right off the bat. The Yellow Jackets had one of the best defenses in Class 6A last year allowing just 12 points per game and went on to finish the year at 10-2. They’ll be solid again this year, and with Helena needing to show its biggest improvement on the offensive side of the ball, this game can be very telling of just how far they’ve come. Last year’s game was a 35-13 final, but it was a one-possession game midway through the third quarter. I’ve hyped them up, so I can’t turn back now, but this will be a great game to start the season. Helena 21, McAdory 17

Last year, Shelby County’s offense was non-existent in the first three games combining for just 12 points. Those struggles were included in an opening-night 13-0 loss to Childersburg. The Wildcats, however, figured it out in the second half of the season and scored 40-plus in four of their final six and their last three in a row. With the return of several key offensive playmakers and a solid offensive line, I expect Shelby County to come out and make a statement in this game. The defense has to be better overall, but the offense should be able to make enough plays to win this one. Shelby County 28, Childersburg 21

No team across Shelby County, in terms of their respective classification, goes into this season with more hype than the Montevallo Bulldogs. Returning a 3,300-plus yard passer, a 1,706-yard receiver and a 1,000-plus yard running back from an offense that set records last year makes them dangerous to opponents. But early in the season, that can also be dangerous to themselves. Throughout last year, Montevallo competed against several teams a classification higher and had to pull away late for wins.

They’ll face those same tests, and perhaps one of the closest games was the opener against Marbury where a late 44-yard touchdown pass from Malik Inabinette to J.J. Evans made the difference. I do think this year’s team should be even more dynamic offensively, and should ultimately be a better team, but they could face more close games, and they have to be ready for that instead of getting complacent. For a game one, however, this team will be clicking like it’s midseason, so that should be too much for Marbury. Montevallo 35, Marbury 21

Last year, the final score of 49-18 didn’t reflect the closeness of this game. Vincent cut the deficit to 20-12 early in the second half and was right in the game, but stamina and depth became an issue playing a team two classifications higher, as White Plains scored 26 points in a five-minute span to pull away. This year, Vincent will be improved up front on both sides of the ball, which should automatically make them better, but depth will still be an issue in the opener against a 4A team, and they’ll be breaking in a new quarterback. I think they have the athletes and talent to compete and possibly pull the upset, but White Plains will have the advantage of more players. Vincent 20, White Plains 31

Cornerstone should be improved from last year’s team, and last year’s won this opener against Sparta 41-14. I expect the Chargers to come out and handle business early in the season again this year with plenty of returning talent to the field. Cornerstone 35, Sparta 14

Evangel will start the 2019 season with its first meeting against Pickens Academy. The Lightning are returning so much offensive talent in quarterback Tyler Henderson, running back Noah Shears and receiver Will Ferrell that it’s hard to not see that group lighting up the scoreboard despite it being an 11-man game. Pickens finished 2-9 last year and gave up 33.6 points per game in the process. Evangel 35, Pickens Academy 21