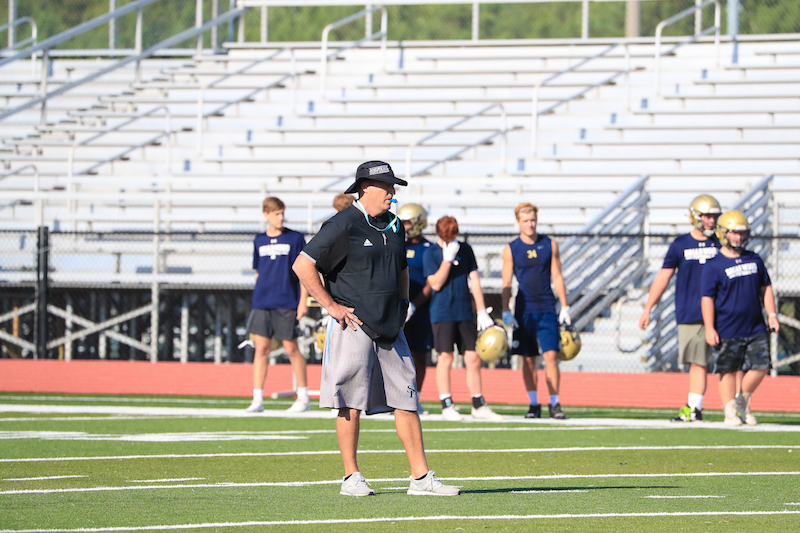 MONTGOMERY – Having put together a special career as an assistant coach at Hoover High School and a head coach at Spain Park High School, current Jaguars’ head coach Shawn Raney picked up the honor of being named the 2019 Alabama-Mississippi All-Star game head coach for the Alabama team at AHSAA media day on Tuesday, Aug. 20.

Raney is currently preparing to lead Spain Park into its first game of the 2019 season, a road matchup with Hillcrest-Tuscaloosa, and will be looking to help his Jaguars bounce back from a 4-6 overall record last season.

But he said he’s also excited for the opportunity to coach some of the state’s best players against the bordering Mississippi team in what will be the 33rd annual Alabama-Mississippi All-Star game on Saturday, Dec. 19.

“I am excited and humbled to be selected to serve as head coach of the Alabama all-stars,” said Raney, who served as defensive coordinator on the 2018 Alabama All-Star coaching staff.  “Not growing up in Alabama, I was truly humbled when I was asked to coach in the game for the first time in 2013, and even more humbled when Coach (Josh) Niblett asked me to be his defensive coordinator in the game last year. But to be chosen as the head coach is even more humbling.”

In his time as head coach of Spain Park’s football team, Raney has amassed an overall record of 44-23 since taking over ahead of the 2013 season.

During his six seasons at the helm, Raney has totaled five winning seasons, three seasons with at least eight wins, four playoff appearances and one state championship appearance.

He also became the first Spain Park head coach to beat Hoover when the Jaguars took down the Bucs 17-0 on Oct. 1, 2015, and in that same year beat them again 7-6 in the semifinals of the playoffs to punch a ticket to the state championship.

The Jags went on to lose the state championship game 14-12 to McGill-Toolen, but it marked just their second appearance in the title game in the school’s existence dating back to its first football team in 2002.

That season also marked the Jags’ second highest win total in school history with the 2007 team picking up 13 wins to finish 13-2, including one forfeited win to Hoover.

With his 44 wins at Spain Park, Raney is also the winningest coach in school history with the team’s first head coach, Vince Di Lorenzo, currently second on that list with 24 wins.

The Mississippi team has won the last two games in a row, but Raney will look to continue carrying on a winning tradition for the Alabama team, which leads the all-time series 22-9.

Before that happens, Raney will lead the Jaguars through the 2019 season, which starts on Friday, Aug. 23, at Hillcrest-Tuscaloosa. Spain Park’s first home game will be the following Friday when the Jaguars play host to Bessemer City.