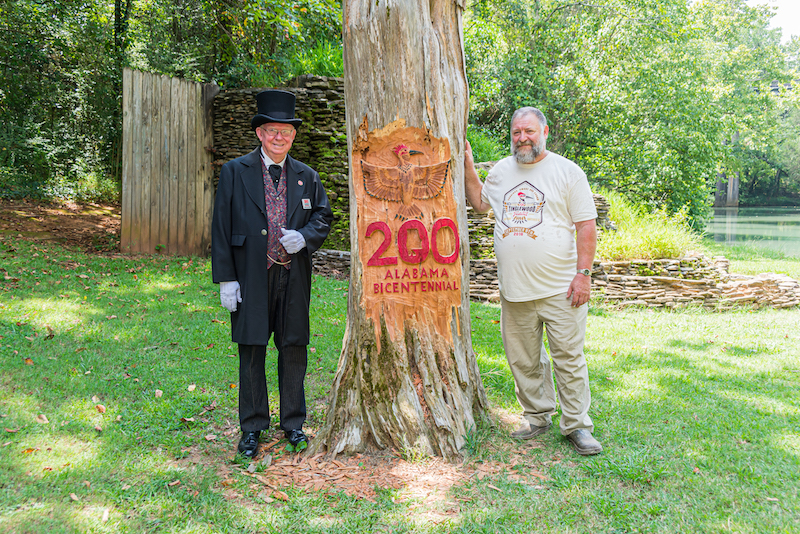 Alabama Bicentennial Ambassador Bobby Joe Seales, left, and Tim Tingle, right, stand next to the special carving Tingle created to commemorate Alabama's 200th birthday. A ceremony with the carving will take place at the Tinglewood Festival on Sept. 7 in Orr Park. (Contributed)

MONTEVALLO – The second Tinglewood Festival will bring back the “Shavings, Smoke and Sound” it has become known for, plus a car show and the unveiling of a new carving by the festival’s namesake, Tim Tingle.

Residents are invited to Orr Park on Saturday, Sept. 7, to celebrate the art of woodworking with onsite chainsaw wood carving, woodworking artist vendors, a whittling contest, live music and a wooden boat race.

“It’s an all-woodworking show,” Tingle said. “All of the artists have to make everything they sell out of wood, and we will have a wooden boat race. There will be a lot going on there.”

Classic car enthusiasts will appreciate the 18th Annual Cars by the Creek.

Children’s activities and food vendors will also be available.

This year’s festival, endorsed by the Alabama Bicentennial Commission, will include a ceremony to unveil a special carving Tingle created to commemorate the state’s 200th birthday.

“It’s carved on a tree with roots in the park,” Tingle said. “It’s in a prominent location in the park, right in front of the fountain.”

Like Tingle’s other carvings in the park, the bicentennial carving is etched into the stump of a tree that died many years ago.

“It’s a beautiful carving,” said Alabama Bicentennial Ambassador Bobby Joe Seales, who will be present for the bicentennial carving ceremony at the festival.

Tingle has carved faces and creatures into the dead parts of living cedar trees at Orr Park since an ice storm hit the area in 1993.

His carvings total 48 and add even more character to a city already known for its vibrant arts scene.

The festival will kick off with a chainsaw carving exhibition at 10 a.m. that will include a panel of well-known artists: Heather Bailey of Calera; Justin Bailey of Calera; Corey Lancaster of Princeton, North Carolina; Abby Peterson of Webster, Kentucky; and Justin Driver of Farmington, Kentucky.

An auction of the items carved throughout the day will be held at 5 p.m.

Live music begins at 6 p.m. with Phil & Walon, a local acoustic duo who met at the University of Montevallo and perform everything from vintage country, rock, blues and gospel to pop.

The Vegabonds will follow. This Alabama-born, Nashville-bred group is on a musical pilgrimage to spread the gospel of pure, unadulterated New South Rock after completing three European tours and four full-length albums.

Festival headliner 20 RIDE is America’s No. 1 Zac Brown tribute band. From traditional country to Caribbean rhythm to sultry soul and body-moving funk, 20 RIDE brings all the best Zac has to offer, including mega hits like “Chicken Fried,” “Colder Weather,” “Free,” “Toes” and, of course, “Highway 20 Ride.”

The festival will end at 10 p.m. Admission is free.

For more information, visit Tinglewoodfestival.com or the Tinglewood Facebook Page.