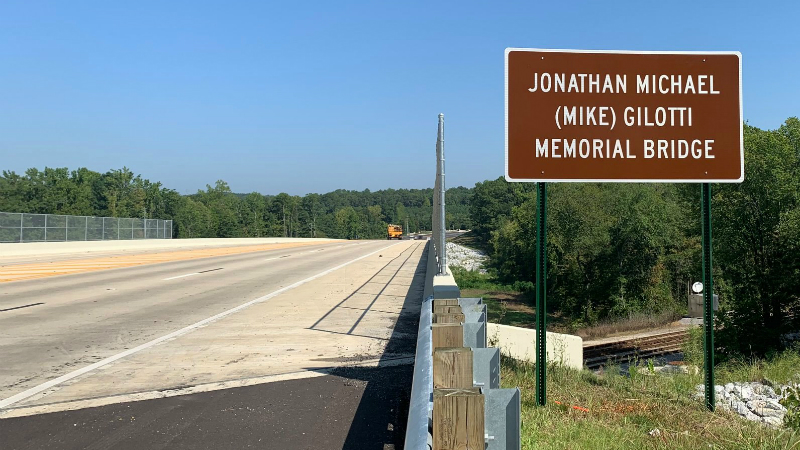 A bridge on Alabama 150 between Ross Bridge Parkway and Lake Cyrus Boulevard was named in honor of Mike Gilotti. (CONTRIBUTED)

HOOVER – Soon after a bridge was dedicated in memory of 33-year-old Hoover resident Mike Gilotti, his family was honored at the Hoover City Council meeting on Monday, Aug. 19.

“We’re so honored to have this bridge named in honor of Mike,” Councilman Casey Middlebrooks said. “Mike was doing all the right things. He served his country, two tours in Iraq, came back here and was a valued member of the community—raising a young family, just doing everything you wish for. He wasn’t doing anything wrong.”

Gilotti was killed in front of his home in the Lake Cyrus community in January 2016 during an apparent burglary.

Gilotti’s family relocated following two trials of suspects in the crime that resulted in acquittals.

Middlebrooks said Gilotti’s wife Heather gave a moving testimony about forgiveness in the days after her husband’s death.

“It touched me, and it touched a lot of people,” Middlebrooks said during the Council meeting to Heather Gilotti, the couple’s two young sons and others in attendance at Hoover City Hall. “Your faith and testimony, I hope we can all model that.”

Middlebrooks called Hoover one of the safest communities in the country, but “when tragedy strikes we rally around each other.”

“Without their help and leadership, it wouldn’t have been possible,” Middlebrooks said.

The bridge is located on Alabama 150 between Ross Bridge Parkway and Lake Cyrus Boulevard, a route that Mike Gilotti took often on his way to work or the gym, Heather Gilotti said.

After his death, the family was “overwhelmed with an outpouring of love and support from the Lake Cyrus community and the Birmingham area.”

Heather Gilotti said the bridge represents progress, overcoming obstacles and the journey from life to death.

“It was so fitting for the amazing man that I loved,” she said. “From the bottom of our hearts, we thank you so much for everything you’ve done.”