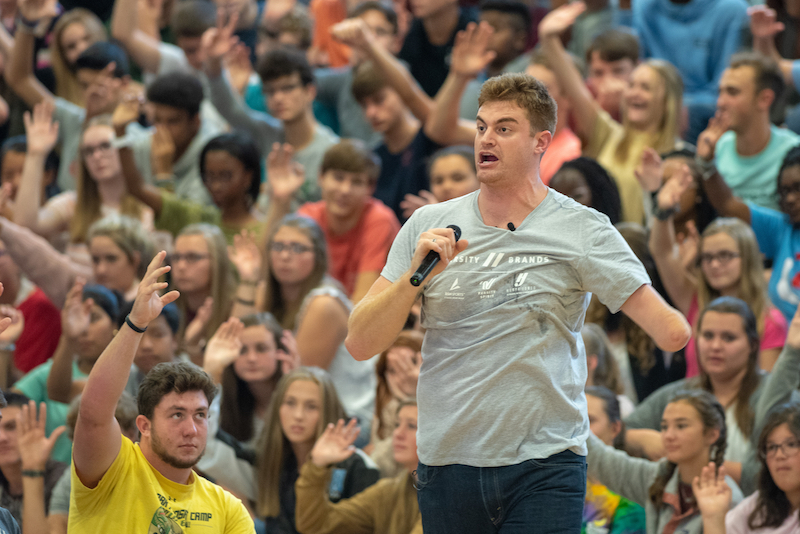 Kevin Atlas, a former division one college basketball player with one arm, spoke to students about believing in themselves at Helena High School on Thursday, Aug. 22. (Reporter Photo/Keith McCoy)

HELENA – “Own your nub.” That’s just one of many inspiring things Kevin Atlas had to say when addressing the student body of Helena High School the afternoon of Thursday, Aug. 22.

Atlas can instantly be picked out of a crowd due to his towering height of 6-feet 11 inches tall, but that isn’t the only physical attribute that makes Atlas different.

Atlas was born premature and the complications preceding the birth included his umbilical cord being wrapped around his neck twice. His arm was caught between the umbilical cord and his neck which led to Atlas being born without the majority of his left arm that Atlas now proudly calls his “nub.”

Despite his disability, that didn’t stop Atlas from reaching several goals he has reached so far in his 29 years of life. Atlas described his childhood, high school years, and his adult experiences to students at Helena High School that included plenty of laughs, but most importantly, Atlas gave students advice on how to be successful and what it takes to be a leader.

Some of Atlas’ other hardships in life included being made fun of for his physical deformity and learning abilities, watching his father pass away from cancer when he was in 5th grade, a leg injury in high school and above all, he was constantly told he couldn’t do something.

“I didn’t start playing basketball until middle school,” Atlas said. “As a 7th grader I was 6-foot-4 and I try out for the team and you know what happened? The coach pulled me aside after practice and explained to me that basketball was a two-armed sport, try something else and he cut me from the team.”

A turning point for Atlas was what he described as a “pivot.” Atlas was given another chance to play basketball for an AAU team that changed his perspective. The new perspective helped Atlas transform into a dominant high school player and eventually a division one and professional player.

At Helena, Atlas encouraged students to use the power of their mind and own whatever “nub” they might have in their lives.

“Here’s the thing, we all have our strengths, weaknesses and insecurities but the difference between all you guys and me is that I was born with one arm and you were born with two,” Atlas said. “We all have things we want to change about ourselves, especially in high school, and you might be able to hide it but I couldn’t. Through basketball, I owned it and embraced it. I love this thing, and if you can’t love yourself, then why the hell do you expect anyone on this planet to love and embrace you? If you can’t own yourself then no one else is going to. I love this thing, I flap it around because I’ve accepted it so other people can accept it. If you just embrace yourself and own whatever your nub is, you’ll own the world.”

The remainder of the assembly, Atlas encouraged students to form new habits. One of those habits was to give three compliments to someone each day and to show up and support others.

“What do you want to be known for when you leave here?” Atlas said questioning the students. “It’s hard to be a leader because you don’t want to get out of your comfort zone.”

Helena High School senior Allison Tanner described what stuck out in her mind following the assembly.

For more information on Atlas and his challenge, visit Believeinyou.com.