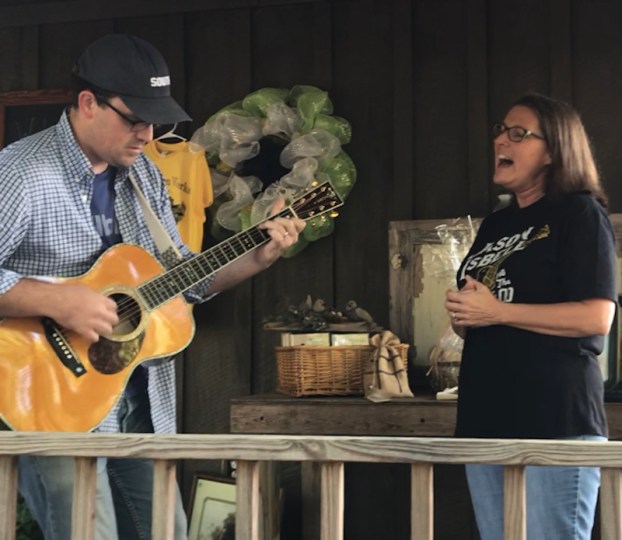 Josh Arnold and Barbara Snyder of the musical duo The Intermission Band sing “I'll Fly Away” on the Country Store Porch at the Shelby Iron Works. The City of Columbiana has invited locals to submit videos of them singing the song to create a town video montage. (Contributed)

Columbiana tunes up to Play Music on the Porch

“Sitting on the porch and playing music has always been a vital source of entertainment in places like Columbiana.” These are the words of Main Street organization president, Josh Arnold, when we asked him about the push to get Columbiana citizens out on their porches playing music on Aug. 31.

Play Music on the Porch Day is a social media movement started in 2013 by Los Angeles-based artist Brian Mallman. In just five years, his movement has become worldwide and includes 60 countries and over 600 cities.

The idea of Play Music on the Porch Day involves, very simply, going outside and playing music. It doesn’t matter what instrument or song and can even include just singing.

Main Street Columbiana has been pushing a social media campaign through its Columbiana Music on Main page to educate their followers about this event. Followers have even been invited to create videos in advance in an effort to create a town video montage of the hymn favorite “I’ll Fly Away.”

Several local businesses have also embraced the idea and have made plans to have musicians at their stores on Aug. 31. As a treat for their patrons, Masters General store, located on Main Street, is hosting musician and author Cabot Barden on its spacious porch. Guests will enjoy music, a book signing and food samples when they visit.

“We feel the music and the performing arts are very important and we wanted to join the international movement,” Masters General Store owner Anna Masters said. “There is not a more beautiful place on Main Street than our porch to host such an event. Bringing a renowned artist for the town to meet is a special privilege too.”

When asked what sparked the idea to encourage Columbiana to embrace this event, Josh Arnold said, “Historically, Alabama has been a wellspring of talent and there is a lot of creative and artistic talent in Shelby County. Columbiana is perfectly poised to be the nexus between the artistic, business, and legal communities that can serve our creative class and allow them to grow and thrive.

“We want people to know that Columbiana is a great entertainment destination,” he added. “Play Music on the Porch Day is a great way to support that.”

Bruce Andrews of the Shelby County Arts Council is also on board with the movement.

“It really is a verifiable fact that music builds community. I believe music creates common ground, a somewhat rare thing these days,” he said. “Music on the Porch is a great idea! I think innovative ideas don’t always cost money, but the idea does have to catch on and that takes time, sharing and repetition. I hope this is an annual event that will gradually become a tradition in Columbiana.”

So how do you participate in Play Music on Your Porch day? The basic idea is to get outside and make a video of yourself playing music and then post it to your own social media platform using the hashtag #playmusicontheporch. If you are participating from Columbiana you can also use #visitcolumbiana. You can see those participating around the world and in Columbiana by following those hashtags.

Sasha Johns is a community columnist for the city of Columbiana.