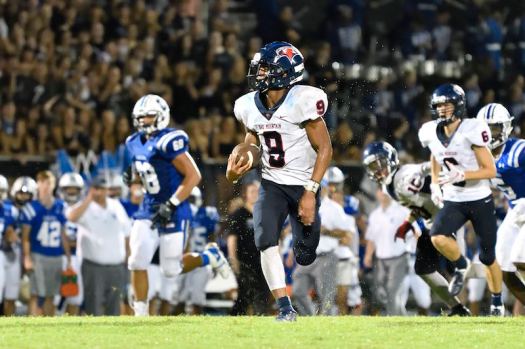 Oak Mountain’s Evan Smith, above, posted the Eagles’ two touchdowns in a 17-0 victory over Chelsea to start the 2019 football season. (For the Reporter/Barry Clemmons) 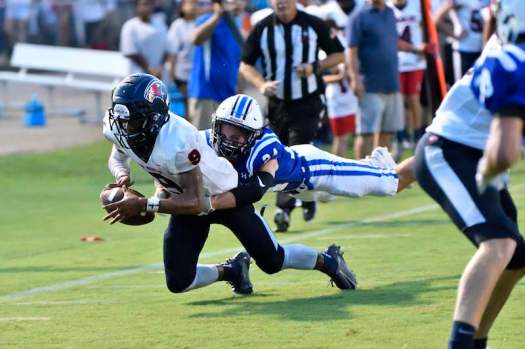 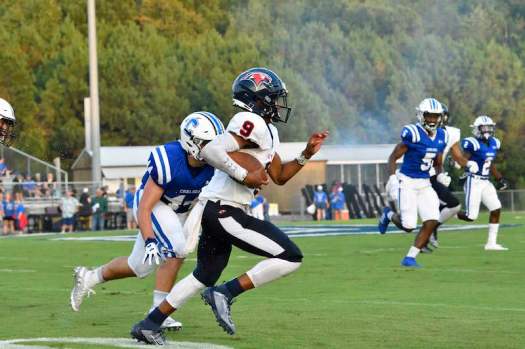 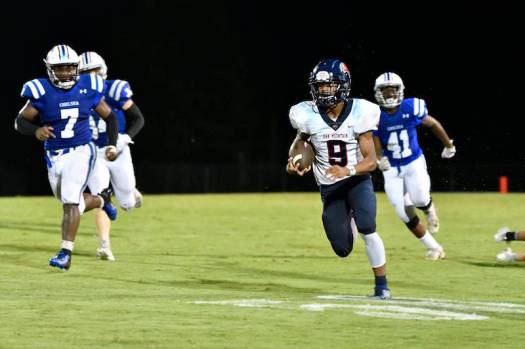 CHELSEA – With the first rain in days drenching the football field at Chelsea High School just ahead of a rivalry matchup between the Oak Mountain Eagles and Chelsea Hornets on Friday, Aug. 23, field conditions were less than ideal—and it showed in a sloppy, physical battle between the two.

But the run game and option attack for the Eagles wore down the Hornets thanks in large part to sophomore quarterback Evan Smith totaling two touchdowns and 119 rushing yards in a 17-0 victory.

Smith, who posted four touchdowns as a freshman in the game last year, said the second go around wasn’t nearly as nerve-wracking.

“I wasn’t as nervous,” Smith said. “It came easier tonight, but we didn’t play as well.”

And while the Eagles escaped with the shutout victory, he was right in saying they didn’t play as well as they could have.

With the wet field conditions, the two teams combined for more than 10 fumbles in the game. Luckily for the Eagles, they were able to fall on most of their fumbles, which kept the game from being a much different outcome.

After one fumble apiece and a few mistakes from both teams on the first two drives, Oak Mountain was able to recover a Chelsea fumble at midfield with 5:25 left in the opening quarter, which became the first break of the night.

The Eagles went on a 14-play drive that ate up the rest of the first quarter. Oak Mountain converted two fourth down attempts on the drive, including a fourth-and-7 10-yard run from Smith.

That eventually set up a 3-yard plunge from him to start the scoring and put the Eagles on top 7-0 with 48 seconds left in the opening quarter.

Two drives later, it looked as if Chelsea may have an answer with a 12-play drive, but a holding eventually killed the drive forcing a fourth-and-15.

Following that, neither team found any offensive success for the rest of the first half with each failing to get a first down.

“We’re young and have a bunch of babes out there playing for the first time, and it sure looked like it tonight,” Bell said.

Early in the third quarter it looked like the same story after three consecutive three-and-outs, but then Smith found a seam.

He broke loose on a 58-yard run, before being pushed out of bounds at the Chelsea 8-yard line to set up first-and-goal.

Oak Mountain failed to convert the big play into a touchdown, but eventually got a 20-yard field goal from Hogan Morton to extend the lead to 10-0 midway through the third quarter.

Chelsea failed to answer, which became costly with Oak Mountain now finally in an offensive rhythm.

The Eagles put together an eight-play drive highlighted by a 34-yard run from Smith, a 19-yard run by Bennett and a 1-yard touchdown run by Smith to take a 17-0 lead with 19 seconds left in the third quarter.

“We struggled at first and came out slow, but we had to stick to it,” Smith said. “Everything eventually opened up because we stuck to the game plan.”

Chelsea answered with its best drive of the game thanks to six consecutive plays of positive yards, but a fumble on what would have been a first down inside the Eagles’ 30-yard line gave the ball back to Oak Mountain.

With the Eagles’ run game clicking now, it didn’t take much for them to chew up the rest of the clock to cement the 17-0 opening-night victory.

Bell was pleased with the second-half effort, but knows there is a lot to work on.

“In the second half, I thought we came off the ball better, but we still didn’t take advantage,” Bell said. “They loaded the box and we had guys running wide open, but we couldn’t hit them. We’ve got to get that cleaned up.”

The defense, however, picked up its first shutout since week three of the 2017 season.

“Defensively, the guys played really well and played hard,” Bell said. “We have a lot of speed, the thing we don’t have is a boat load of size, but they played well and we tackled.”

Oak Mountain’s Devin Holden added nine rushing attempts for 81 yards, while Bennett totaled 75 to give the Eagles 275 rushing yards between those two and Smith.

Defensively, Juston Taylor led Oak Mountain with 5.5 tackles, while Chase Schwender, Wil Pfaffman and Jacob Payne all had between four and five tackles.

Defensively, the Hornets got three tackles from several players, while Jordan Smith led the team with four tackles.

Oak Mountain will have a bye week on Friday, Aug. 30, while Chelsea will look to bounce back with a road contest against county-foe Briarwood.