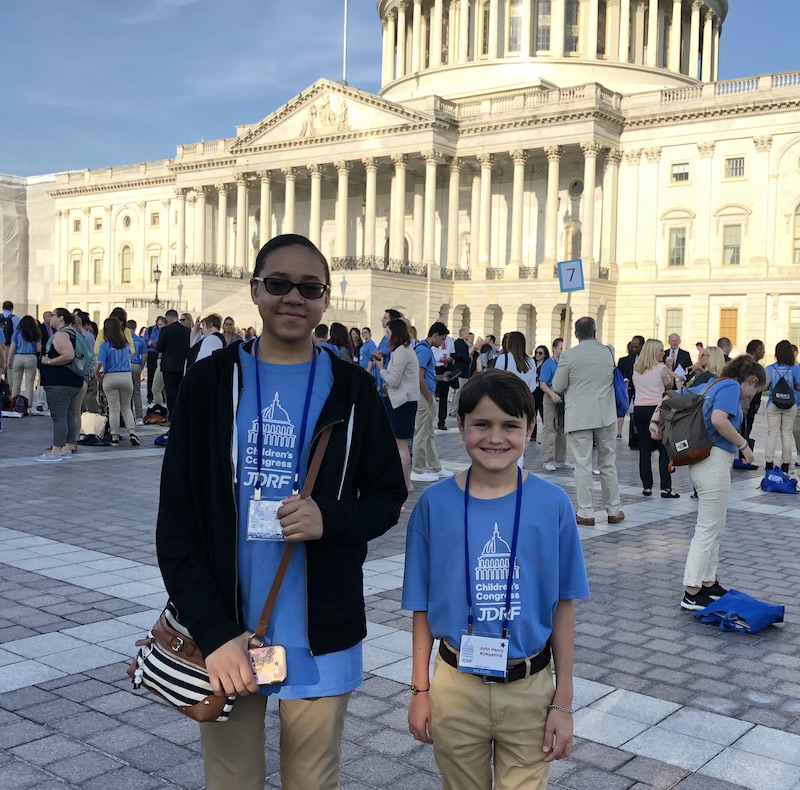 The purpose of the event is for children, ages 4 to 17, from all over the United States, to lobby members of Congress to remind them of the support needed for Type 1 diabetes.

“The first Children’s Congress took place in 1999, and it is held every two years,” said Lori Kirkpatrick, who also attended the event. “There is an online application and each candidate submits a letter to his or her district representative giving their Type 1 diabetes story, what life is like for them living with this disease, their involvement with the JDRF, and why they wish to be chosen as a delegate. Each state and the District of Columbia is represented.”

This year, the two delegates chosen from Alabama were both from Shelby County: John Henry Kirkpatrick, 11, of Birmingham and Cheyenne Braxton, 15, of Helena.

“There were also sessions where the kids could visit with different stations and hear working professionals talk about their careers and living with Type 1 diabetes,” Kirkpatrick said. “We had a session to prepare us for our day on Capitol Hill. On July 10, every delegate spent the day on Capitol Hill for their meetings with their State Senators and district representatives.”

Both Braxton and John Henry Kirkpatrick had the opportunity to meet with staff members from the offices of Sen. Doug Jones, Sen. Richard Shelby and Rep. Gary Palmer.

“During the meetings, they talked about what life is like living with Type 1 Diabetes, their desire for a cure, and the need for the renewal of the Special Diabetes Program,” Kirkpatrick said.

The students put together a scrapbook showcasing life with the diagnosis and living with Type 1 diabetes, which they had the opportunity to show people at the event.

Alabama’s local chapter of the JDRF is holding an upcoming ONE WALK on Nov. 3 at Railroad Park, one of two major fundraising events held each year for diabetes research.

For more information on events and opportunities to get involved, visit www.jdrf.org/alabama or email the chapter at alabama@jdrf.org.

Type 1 diabetes is where the body does not produce insulin.

According to the American Diabetes Association, the majority of individuals diagnosed with diabetes have Type 2, but about 5 percent are diagnosed with Type 1 diabetes.

“The body breaks down the carbohydrates you eat into blood glucose (also called blood sugar), which it uses for energy,” according to Amercan Diabetes Association. “Insulin is a hormone that the body needs to get glucose from the bloodstream into the cells of the body. With the help of insulin therapy and other treatments, even young children can learn to manage their condition and live long, healthy lives.”

Some common misconceptions about Type 1 diabetes include:

-It is only a disease that affects children. Type 1 diabetes is not just a childhood disease, it can occur in individuals of any age.

–The disease is caused by eating too much sugar or lack of a healthy diet and exercise.

The disease can affect anyone, and is not caused by eating too much sugar. The exact cause of the disease is unknown.