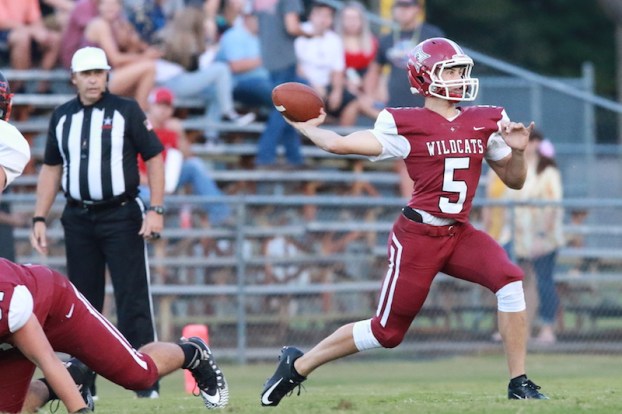 The Shelby County Wildcats dropped a heartbreaking first game of the 2019 season after Childersburg scored a late touchdown to pick up a 22-14 win on Friday, Aug. 23. (File)

COLUMBIANA – Senior running back Terry Thomas scored on a 3-yard run with 1:05 remaining to lift visiting Childersburg to a 22-14 victory over host Shelby County in the season opening game for both teams on Friday, Aug. 23.

The Wildcats mounted a last-minute drive and advanced the ball to the Childersburg 23-yard line with 24 seconds remaining. However, a pass attempt by senior quarterback Chase Holliman was intercepted by junior Javiun Jones ending the drive and the game.

Shelby County opened the scoring with a nine-play, 75-yard drive that consumed the first five minutes of the game. Junior running back Raheem Montgomery capped off the opening drive with a 3-yard run. Sophomore Kai Barnett kicked the extra point for a 7-0 Wildcat lead.

After holding Childersburg to a 3-and-out, the Wildcats possessed the ball for the remainder of the first quarter and first minute of the second quarter. Childersburg then put together a four-play, 72-yard drive ending with junior Xzavion Garrett scoring from 1 yard out. Senior quarterback Cameron Thrash converted a 2-point play to give the Tigers an 8-7 lead.

That score held until the fourth quarter. Garrett scored his second touchdown of the game with just over 10 minutes remaining. However, the Tigers failed on the 2-point attempt to make it a 14-7 game.

The Wildcats then put together a 12-play, 62-yard drive taking the next seven minutes off the clock. Sophomore Evan Joiner ran the ball in from 17 yards out and Barnett kicked the extra point to tie the game at 14-14.

The Wildcats forced the Tigers to start from the 20-yard line on the ensuing drive.

Shelby County juniors Landen Stewart and John Pennington made key stops to force a third down, but Thomas and Thrash had back-to-back 37-yard runs to drive the ball down to the 3-yard line.

That’s when Thomas punched in the go-ahead touchdown from 3 yards out.

The Wildcats put forth a valiant last-ditch effort, and despite coming up short, showed they could make plays to attempt a comeback late.

Shelby County (0-1) will now look to bounce back when they travel to Montevallo for a non-area game Thursday night. Montevallo will be coming off a Saturday game after the Bulldogs’ opener was postponed due to weather.

Helena runs through McAdory to open 2019 season with win

By GRAHAM BROOKS / Staff Writer HELENA – What a difference a year makes. One year after falling to McAdory... read more