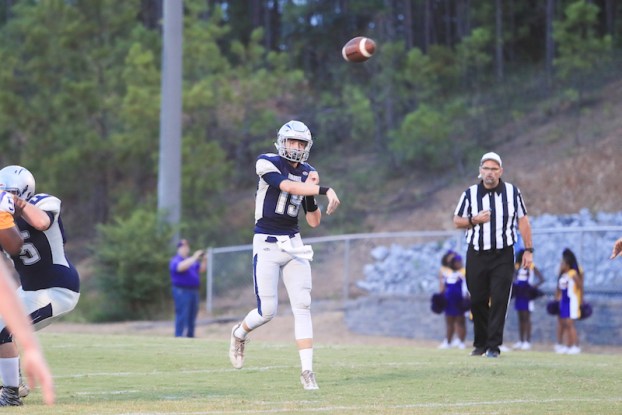 CARROLLTON – The first of two 11-man football games to open the season is in the books for 8-man program Evangel Christian School. ECS hit the road in Alabama Independent Scholastic Association (AISA) action Aug. 23 for an 18-6 win at Pickens Academy.

“We played really hard. Of the 36 kids we dressed, I’m going to guess we played 25. We had kids who played tonight who probably weren’t quite ready, but we didn’t have a choice. We threw them in the fire literally, it felt like a fire,” Smith said.

“We are so thankful for our fans and parents that came. We had a huge following. We want to thank them for traveling 2.5 hours on a Friday night.”

It was the second quarter before either team found the end zone. Will Ferrell caught a 15-yard pass from Tyler Henderson to give Evagel a 6-0 lead. The drive nearly stalled the play before when a ball was snapped over Henderson’s head but the Lightning recovered. The score remained the same at halftime.

Smith said the Lightning ran the football more in the second half, setting up an early third quarter touchdown on a 6-yard run by Noah Shears to go up 12-0.

A 60-yard run for Pickens helped set up a short touchdown, but ECS responded with a touchdown on a 23-yard reception by Jet Lodge from Henderson – one of three possessions in the second half.

Pickens Academy looked to cut into the 18-6 lead when they had an open receiver in the back of the end zone, but sophomore safety Harris Black came across the field and tipped away the potential touchdown pass, according to Smith.

Shears led the Lightning with 72 yards on eight carries, while Ferrell had 61 yards on six runs. Henderson was 9-of-16 passing with 113 yards and two touchdowns, and added 36 yards on 15 carries.

With three receptions each, Ferrell had 44 yards receiving, Lodge had 42 yards and Yura Gothard gained 25 yards.

“We’ve got to be better in a hurry, because we know who’s next,” Smith said.