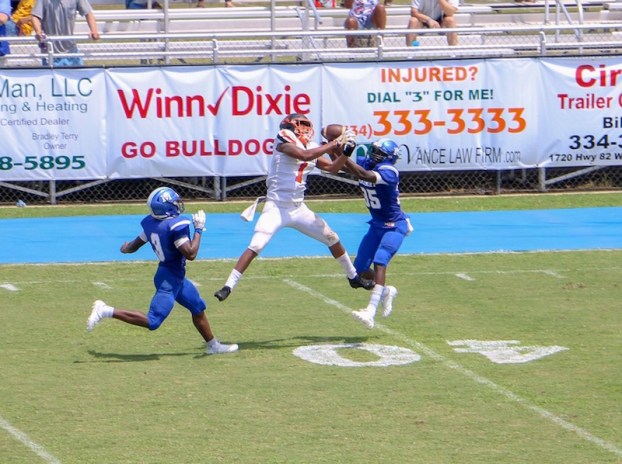 Montevallo dropped its season-opening game at Marbury in a delayed matchup that finished on Saturday, Aug. 24, following a weather delay on Friday night. (Contributed)

Montevallo falls to 5A Marbury in delayed season opener

MARBURY – Following a record setting season for the Montevallo Bulldogs’ offense a season ago, the expectation was high coming into the 2019 season with most of its talent returning, but that didn’t make an opening matchup against Class 5A Marbury any cupcake.

After losing last year’s game thanks to a late touchdown from Montevallo’s JJ Evans, Marbury came into this matchup ready for revenge, and aside from two Montevallo touchdowns, Marbury’s game plan was sound and led to the home Bulldogs pulling away for a 48-14 victory.

Early in the first quarter and early in the second quarter, it looked as if Montevallo was going to have a chance to win the game, but Marbury had answers to every momentum swing the visitors tried to create.

Marbury got the scoring started on an early touchdown run to take a 7-0 advantage, but it didn’t take long for Montevallo’s exciting offense to find an answer.

The connection that was so consistent and dominant last year between Evans and quarterback Malik Inabinette led to a response when the two linked up for a 21-yard touchdown pass.

Tight end Jamarius Carter then added the 2-point conversion to give Montevallo an 8-7 advantage.

At that point, Montevallo looked to be in good shape, but Marbury came back with a furious answer.

Following that touchdown, Marbury went on to score 20-unanswered points the remainder of the half to open up the game.

They regained the lead with a quick rushing touchdown to make the score 13-8 near the end of the first quarter. Marbury then followed that up with a touchdown early in the second quarter to take a 20-8 advantage with 10:47 remaining until halftime.

With Montevallo’s offense struggling to move the ball at the rate it did a season ago behind a young offensive line, Marbury took advantage of their lack of scoring and added one more touchdown in the quarter to take a 27-8 lead into the break.

Coming out in the second half, Montevallo needed to find some confidence with a quick score, and that’s exactly what the Bulldogs got.

A nice drive was capped off by a short touchdown pass from Inabinette to Kial Cottingham to bring them within two scores at 27-14 early in the third quarter.

But like the first touchdown Montevallo scored, all that did was add fuel to Marbury’s fire of revenge.

Marbury finished the third quarter with two more touchdowns for a 41-14 lead heading to the final quarter. And with one more in the fourth, they were able to close the game out with 21-uanswered points for the 48-14 victory.

Montevallo (0-1) will now get a second Class 5A team in a row in week two with a matchup against Shelby County. That game, scheduled for Thursday, Aug. 29, will also see the Bulldogs on a short week with the Wildcats having an extra day of rest.