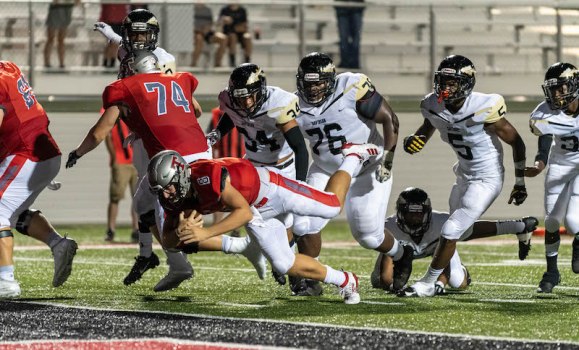 Thompson’s Sawyer Pate, above, posted four touchdowns in his first start as a senior to lead the Warriors to a 40-14 victory over Davidson to open the 2019 season. (For the Reporter/Neal Wagner) 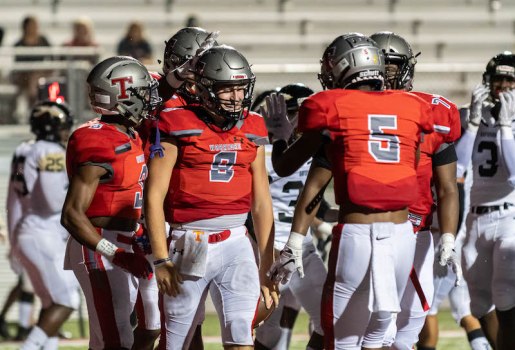 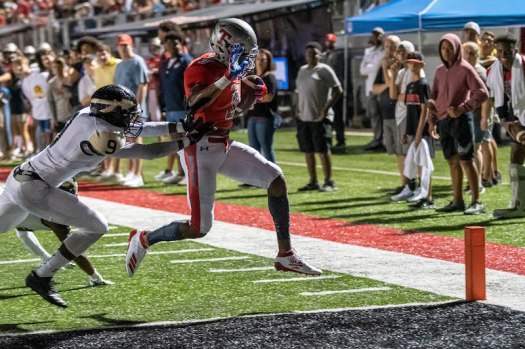 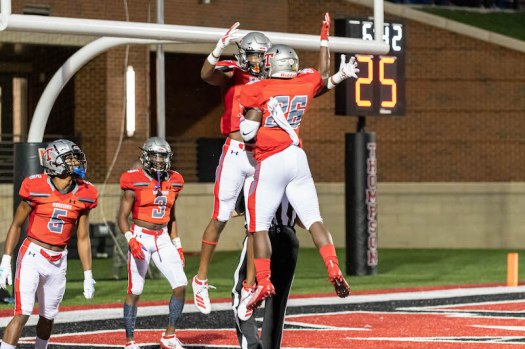 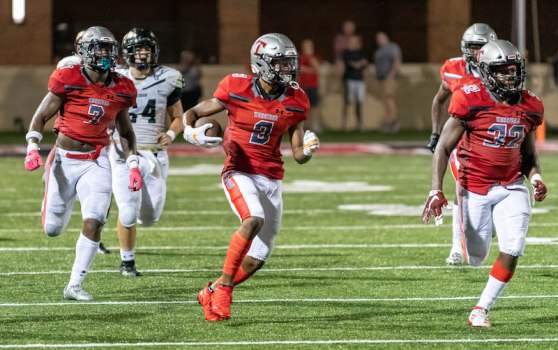 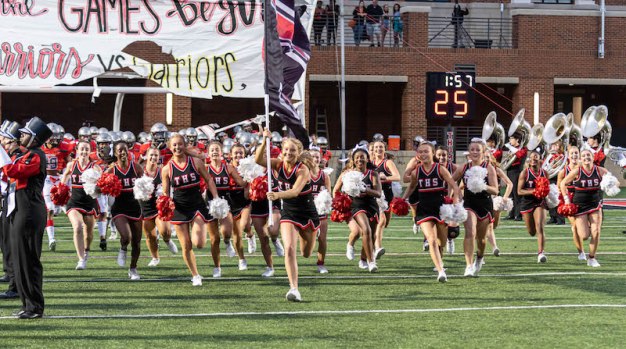 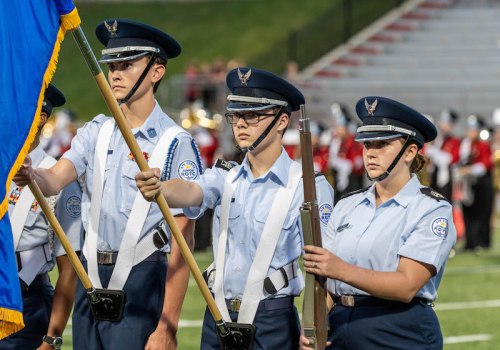 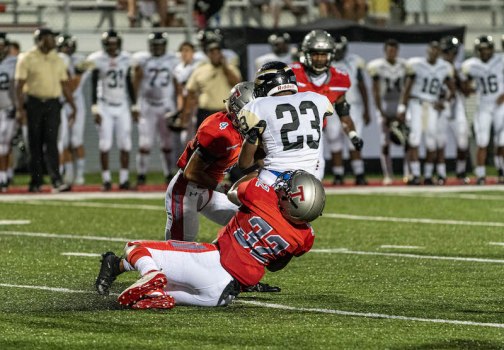 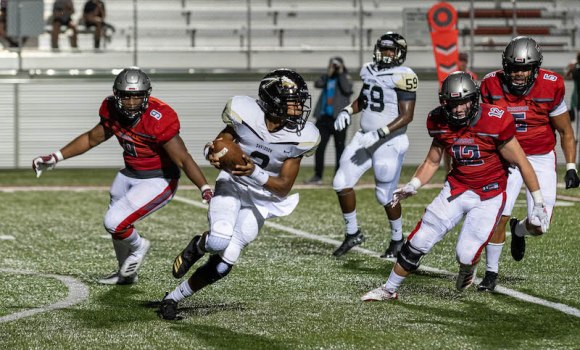 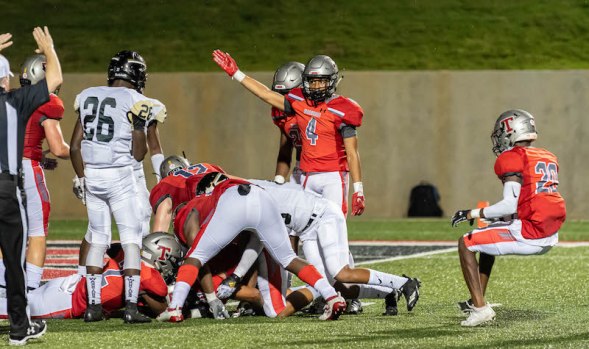 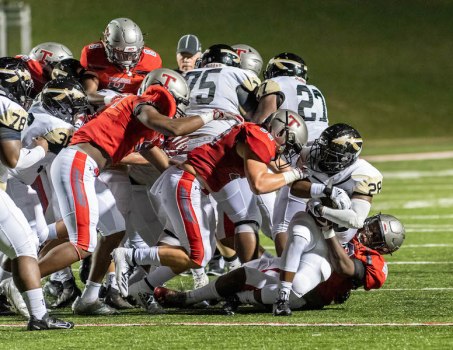 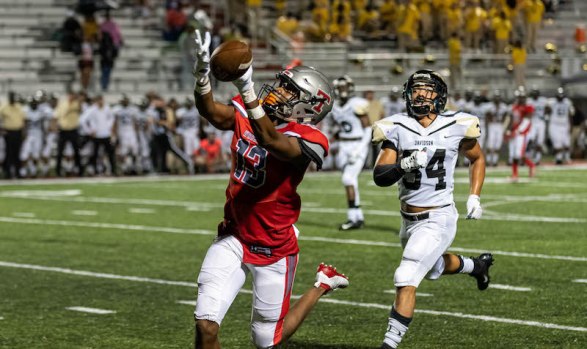 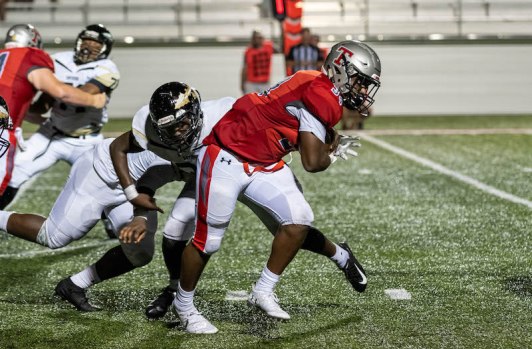 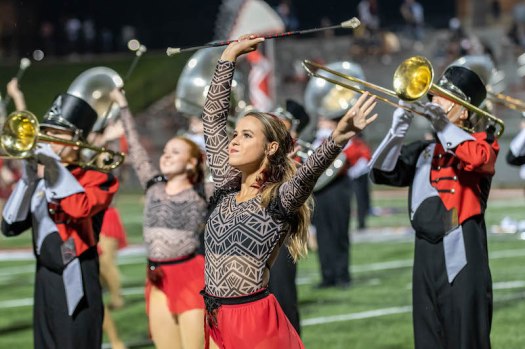 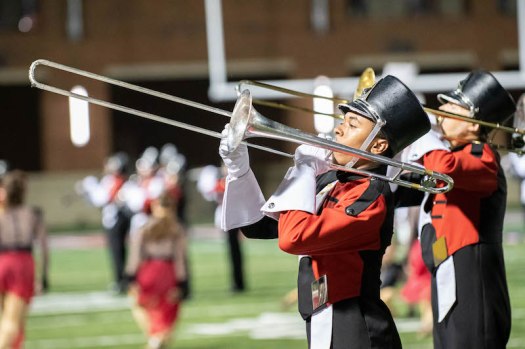 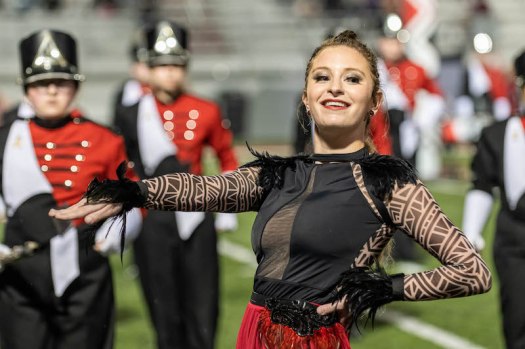 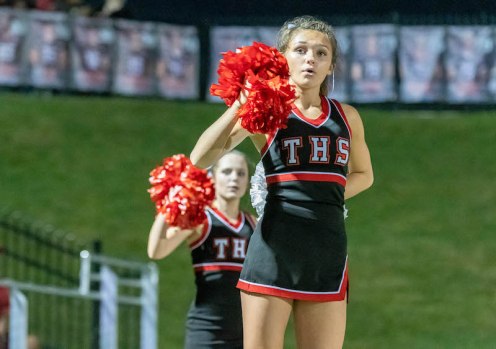 ALABASTER – For those who thought Thompson’s offense was going to take a hit with the departure of an All-State quarterback and All-State running back, the 2019 Warriors are here to tell you that’s not the case.

In Thompson’s opener of the 2019 season on Saturday, Aug. 24, inside Warrior Stadium, the Warriors got 30 first quarter points on their way to a 40-14 win over visiting Davidson in the inaugural Go Gold Bowl to benefit Childhood Cancer Awareness.

Before the opening quarter had come to an end, senior quarterback Sawyer Pate had 163 yards passing and four touchdowns—three passing and one rushing.

“Since I’ve been in the system four years, the knowledge does help me, but that experience level wasn’t there, so today definitely helped me with that,” Pate   said.

Pate said the game plan was for the Warriors to come out throwing early and often because of matchups, which led to the successful start for him.

On Thompson’s first drive of the game, Pate completed all three of his passes for a fast start. He hit Jarrett Crockett for 23 yards, Andrew Barbour for 21 yards and then Michael Pettway for a 4-yard touchdown pass to cap the drive off for a 7-0 lead less than two minutes into the game.

“That was a confidence booster for me and the whole team to get points on the board early,” Pate said.

Then Thompson’s defense and special teams made a difference.

After forcing a quick three-and-out on Davidson’s second drive of the game, the snap on the punt went over the Davidson punter’s head and into the end zone for a safety for a 9-0 advantage.

Thompson then got the ball on the kickoff following the safety, and while the Warriors faced a quick third-and-9, Pate stayed calm and converted the biggest play of the night on a 70-yard touchdown pass to an open J.B. Mitchell to put THS on top 16-0.

The Warriors then forced another three-and-out and another bad snap on fourth down led to Thompson recovering the ball at the 2-yard line.

On the ensuing play, Pate tossed the ball himself on a quarterback sneak up the middle to put Thompson on top 23-0 lead midway through the first quarter.

That was followed by another three-and-out from Davidson’s offense, which set up Thompson’s longest drive of the night.

Sawyer had four incompletions in his first six attempts of the drive, but he bounced back with big plays. The first was a 14-yard pass on third-and-10 and the second was an 8-yard pass on fourth-and-4.

Both kept the drive alive and led to a 15-yard pass to Pettway to set up first-and-goal from the 2-yard line. One play later, Pate took the snap and tossed the ball to Pettway on a sweep that allowed the senior receiver to get to the edge for another touchdown to put the Warriors on top 30-0 with 2:05 left in the opening quarter.

Scoring slowed down for a while after that, but the combination of the offense making early plays and the defense forcing Davidson into three-and-outs led to a dominant early lead.

“I was very pleased with how we played on third down tonight,” Freeman said. “We were much better than the spring game, and that’s something we have to do a good job of.”

To that point in the game, Pate had 163 yards passing and three total touchdowns, while Davidson had only crossed midfield one time.

Conner Harrell replaced Pate on Thompson’s next drive, as the Warriors had already opened up a big lead. Thompson went on to add a 35-yard field goal from Evan McGuire in the second quarter to extend the lead to 33-0 at the half.

The second half became more about getting a lot of young faces experience, but on the first drive of the half, several of the starters got to play one more offensive drive, and they made it count.

Pate totaled 43 more passing yards on the drive before Crockett took a 10-yard run into the end zone to put the Warriors up 40-0.

From that point forward, young players stepped in for Thompson, which was a positive for Freeman.

“A lot of guys played tonight and it’s a good reward for the guys that came all summer and worked,” Freeman said. “A lot of games they don’t get to, but tonight we got to play a lot of people. We play in a tough region and need to have as many guys ready as we can.”

For the most part, those younger players held their own, but Davidson was able to score two late touchdowns in the fourth quarter to create the final score of 40-14.

Freeman noted how excited he was not just for the season, but to see those guys get some time.

“We were anxious to play,” Freeman said. “When you’ve got a lot of guys that have never played, you’re anxious to get them out there. We started a freshman and a bunch of sophomores tonight. This is the year at Thompson High School that we knew we were going to have to get some young kids ready. Our coaches have done a good job of getting those guys ready.”

Pate finished the game 13-for-20 with 217 passing yards and three touchdowns, while also adding a rushing touchdown for four total. Jermel “JoJo” Gaiters led the team in rushing with 42 yards.

Thompson will host Foley on Friday, Aug. 30, as the Warriors look to start 2-0 for the fifth consecutive year. That will take place one week before the Hoover Buccaneers come to town.