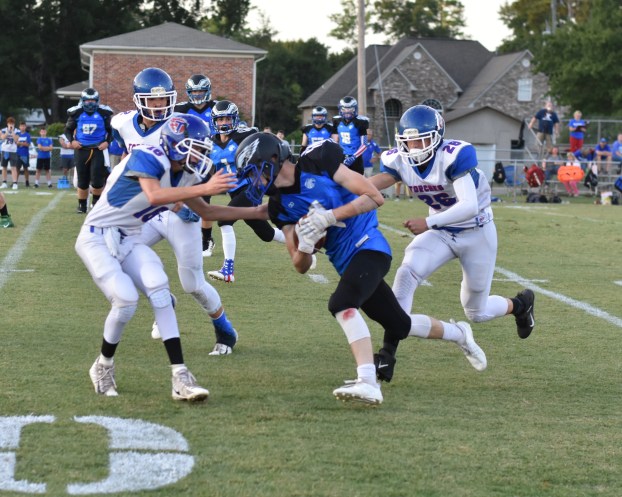 ALABASTER – Formerly Hope Christian School, Trinity Christian kicked off its inaugural 2019 football season on Friday, Aug. 23, comprised of several different home schools from around the area to compete as one team.

Taking on Tabernacle at Alabaster’s Buck Creek Park, the Eagles looked like a team that was in midseason form instead of competing in the first game of the year thanks to a dominant offensive performance that saw them rack up 66 points on their way to a 66-28 victory.

Trinity got the scoring on touchdown passes from quarterback Brennan Whatley to receivers Josh Baize and Isaac Bradshaw. Those quick strikes were just the beginning and built Bradshaw’s confidence offensively.

He went on to score two more touchdowns, one form 40 yards out and another from 7 yards out.

From the quarterback position, Whatley also was able to find some success running the ball. In addition to Bradshaw’s dominant game on the ground, Whatley went on to post three rushing touchdowns of his own with 120 rushing yards.

While the offense played about as perfect of a game as it could have, the Eagles’ defense was also sound thanks in large part to the effort of defensive ends Noah Douglas and Blanton Tierce.

Both edge rushers were disruptive at the line of scrimmage and in the backfield with several sacks and tackles for loss.

They were aided by additional help from linebackers Dylan Weathers and Matthew Mair, who also had impressive games on the defensive side of the ball.

Now 1-0, Trinity will hit the road to take on the Oaks School on Friday, Aug. 30. That will mark the first of three consecutive road games for the Eagles.

Eagles build big lead, hold on for win at Pelham

PELHAM – Calera built a 27-0 halftime lead and then almost let it slip away in a 27-20 football season-opening... read more